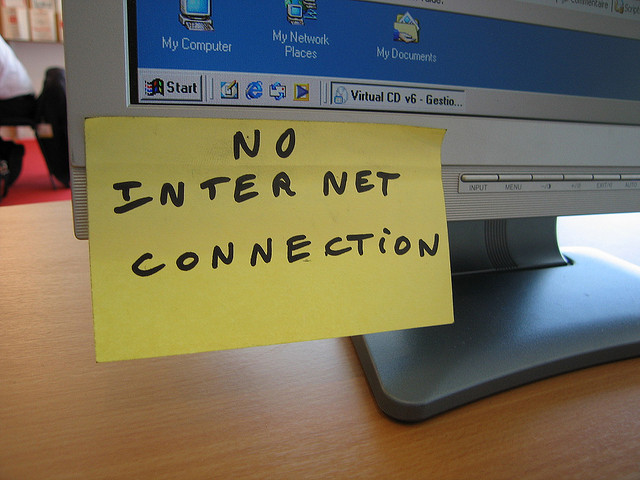 The prevailing mood around tech is that there is no limit to the power and size of the Internet. Humanity’s most impactful creation since, well, probably the automobile has spread so far and so wide, that according to a recent piece in Salon, network-enabled gadgets (smartphones, tablets, computers) will outnumber the population of earth by the end of the year.

Obviously, there is still a massive divide between the haves and the have-nots. Many of us have upwards of ten connected devices, and I’m sure that number spikes ever higher the closer one gets to Silicon Valley.

What’s really terrifying about the piece, however, is this cold hard fact:

“the capacity of the world’s networking infrastructure is finite, leaving many to wonder when we will hit the upper limit, and what to do when that happens.”

The Internet – the world’s only “unlimited” resource – is, in fact, totally limited.

“We know there are certain limits that Mother Nature gives us—only so much information you can transmit over certain communications channels. That phenomenon is called the nonlinear Shannon limit [named after former Bell Telephone Laboratories mathematician Claude Shannon], and it tells us how far we can push with today’s technologies. We are already very, very close to this limit, within a factor of two roughly. Put another way, based on our experiments in the lab, when we double the amount of network traffic we have today—something that could happen within the next four or five years—we will exceed the Shannon limit. That tells us there’s a fundamental roadblock here. There is no way we can stretch this limit, just as we cannot increase the speed of light. So we need to work with these limits and still find ways to continue the needed growth.”

So there’s hope, of course. But the simple fact that the network we all use for business, communication with loved ones, daily doses of adorable puppy videos has limits is a bit disconcerting.

Gamers have even more reasons to worry, given the increasing connectedness of gaming experiences. If the network problems start reaching their limits, you can likely kiss stable connections (conducive to basically any networked online multiplayer games) goodbye. And what of single-player games that necessitate a connection for DRM reasons? What further of browser games, even though they tend to be far graphically simpler – there’s simply no playing them at all offline.

Designers and programmers will need to start figuring out how to use the proverbial pipes more efficiently, while we all hope and pray for better infrastructure solutions.