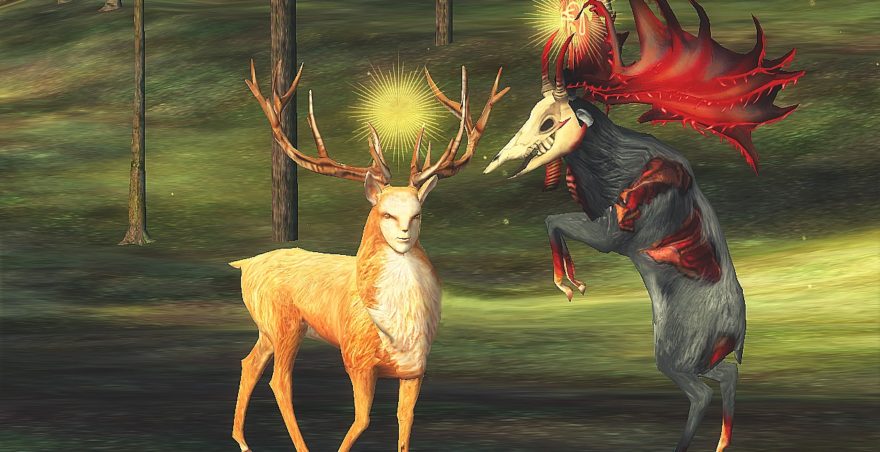 Tale of Tales is looking to remake the very first videogame they made as a collective—comprised of married couple Auriea Harvey and Michaël Samyn. They’re trying to raise €40,000 on Indiegogo in order to update the dated technology that runs the original version of the game so that it may live on for another decade.

The game is called The Endless Forest (2005), which is an online multiplayer game without any clear goals, and where each player is represented by peculiar deer with a human face inside a peaceful forest. Most notably, communication between players is limited to gestures (there’s no chat), and the playfulness and meaningful connections this creates between them actually inspired the multiplayer component of Journey (2012).

“We don’t want to hide it anymore”

There’s also a system that Tale of Tales calls “Abiogenesis,” which allows them to essentially play god, able to alter the world in both mundane and magical ways: they can introduce rain to the forest, make giant flowers explode, turn everyone into frogs, make statues float, and so on. There are also special events that can be arranged through this system, the players invited to a certain location at a certain time to witness … something. It’s this part of the the game that Tale of Tales considers “a living work of art, a sort of ongoing digital theater,” but unfortunately the current technology behind the game can struggle to keep up with so many players in one place. Hence the call for a remake and the funds to enable it to happen.

“The Endless Forest has been our creative cornerstone and we want to take it further. We don’t want to hide it anymore out of fear that the technology wouldn’t be able to handle an increased amount of players,” wrote Tale of Tales. “And we want to add all the ideas that we have come up with together with the players over the years.”

This move may come as a bit of a surprise if you’re at all familiar with Tale of Tales. Back in June 2015, the studio actually said they were done making videogames. This came after their last game, Sunset (2015), failed to push the kind of sales they needed it to. “There’s barely enough income to keep our company going while we look for ways to raise the funds to pay back our debts,” it read in the announcement. Instead of videogames, Tale of Tales committed to the adjacent of world of virtual reality, bringing the magnificence of Christian art and architecture to the format with Cathedral in the Clouds.

While Tale of Tales isn’t making a videogame, but remaking one, it’s good to see that they haven’t abandoned the medium entirely. They’re looking to keep The Endless Forest‘s remake free still, like the original, but if you do throw some money at it right now you can get 3D models of the deers (ideal for 3D printing, apparently), and upgrade your username to Legendary status.

You can find out more about The Endless Forest and support it over on Indiegogo. You can download and play the original game here.