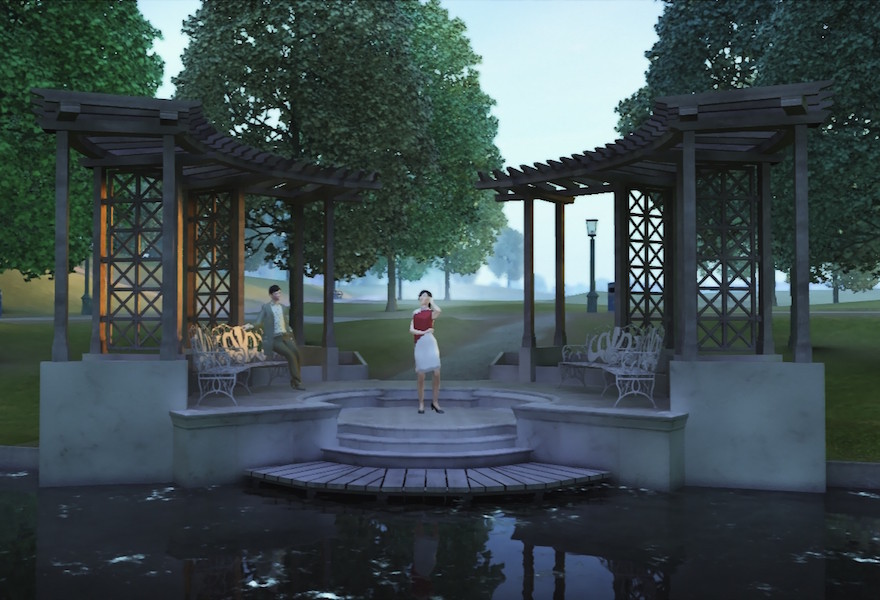 Dubbed “virtual theatre” by its creators, Cheongsam is a game about chance encounters and the types of conversations that stretch until 3AM. It’s also about the role players have in creating a game’s story. Cast as a young man named Michael, you spend an evening getting to know an AI-controlled acquaintance named Maggie. There’s no set goal to your encounter with her, no achievements to earn or pre-written story branches to unlock. Rather, Maggie acts as a scene partner, and will respond to your body language and facial expressions in subtle ways, such as slightly and mysteriously glancing off into the distance. The way she plays off you, and you off her, are meant to be similar to the decisions actors make on stage. Like an improv scene, you build on each other’s choices, arriving at unexpected places so long as neither of you outright denies the other.

The neat thing about theater, and perhaps the quality that most sets it apart from film, is that it is performed live. Whereas movies are typically filmed away from an audience and, barring recuts, remain the same forever, theatrical performances vary wildly from night-to-night. On stage, actors are capable of responding to an audience in real-time, slightly changing the decisions they make to suit the feedback the audience is giving them. For instance, if a theater company is performing Twelfth Night and nobody is laughing, the actors can then change the way they deliver certain lines to elicit more laughter. If film is static, then theater is dynamic.

no two playthroughs of a videogame are entirely the same

Similarly, no two playthroughs of a videogame are entirely the same. Even if the story does not change, the way the player moves, the equipment they wear, and the tactics they employ will. Is your Mario hotheaded and someone who rushes through obstacles? Or is he more patient, carefully planning out each jump before making it? Games are performative, and Cheongsam understands this. Maggie isn’t just an animatronic who consistently repeats the same motions while guiding you through an on-rails theme park ride, but rather your own built-in audience who encourages you to engage with her and experiment. As she responds to your decisions, you can cater your performance around the feedback she gives you, just like an actor on stage. Meanwhile, she’ll be doing the same. Together, you’ll create your own unique production.

As the game’s website explains, “Cheongsam invites you to give your own interpretation to the script.” Just as Jonathan Pryce’s Hamlet is different from David Warner’s Hamlet, you and your neighbor might have completely different takes on Michael. Again, this isn’t necessarily new for games—in top Street Fighter tournaments, Lee Seon-Woo’s approach to playing Akuma is nowhere near the same as Hajime Taniguchi’s. But what’s refreshing about Cheongsam is how openly it acknowledges this. It encourages its players to think more like actors than filmgoers, and in doing so, not only makes them active collaborators in shaping this specific game’s narrative, but helps highlight the ways, however tiny, in which players have always shaped the narratives of the games they play.

Cheongsam is planned for release on PC, with more details coming later this year.