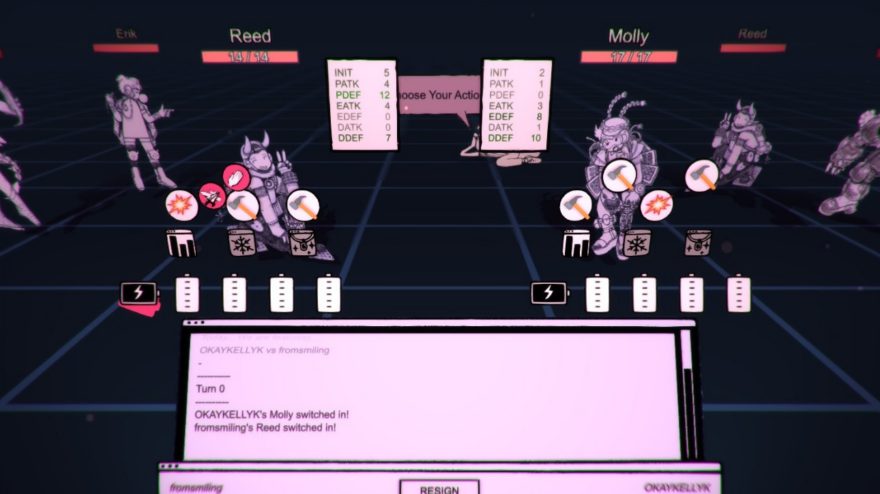 One of the reasons Bravery Network is being made is because Damian Sommer, creator of Chesh (2015) and The Yawhg (2013), couldn’t find anyone to play Pokémon with.

“I played a lot of competitive Pokémon,” said Sommer, “I still do, actually. It’s just a lot of fun for me. I’m the best Pokémon player I know, but I’m not that good in the grand scheme of things. I don’t really have anyone I know who can take me on.”

Sommer laments that people don’t always seem to appreciate Pokémon’s player-on-player battle systems. It often takes a back seat to the collecting aspects of a series that shouted “GOTTA CATCH ‘EM ALL” as its war cry, a battle plan to merch hundreds of cute gibberish critters for en masse virtual and physical consumption. Unlike Pokémon’s many clones, such as Robopon (1998), Dragon Warrior Monsters (1998) and that Looney Tunes game, Bravery Network is focused on the arena. And instead of animals being forced to gouge each other for our entertainment, this game pits celebrity ennui teens against one another.

playing nice-nice with opponents to make them hate you less

Set in a future where medicine has not only cured all what ails humanity, but made them nigh invincible and ageless, Bravery Network depicts a future-sport called “Bravery.” Teams of five attempt to make their rivals surrender by any means necessary. “Violence, usually” says Sommer.

The version I played is in its early stages. The fighting system as-is isn’t friendly for a single session, the subject of capturing youthful pugilists remains a “contested issue,” but a lot of the visual elements are a treat. Fights are in a virtual grid and the combatant kids—accessorized with battle armor and the future-world’s latest accoutrements—are floating magenta cut outs drawn by cartoonist Kelly K. Some fighters look like they’re ready to arm wrestle robots while others look like they’re going for high tea at an anime convention. With myriads of stats and a UI of hovering windows, Bravery Network looks like a hybrid between ICQ and Thunderdome.

Some attacks deal traditional damage, some capitalizing on strange speculative technology, which Sommer described as a sort of sorcery. Others go straight for the mind, playing nice-nice with opponents to make them hate you less, or talk about grabbing some lunch to make them hungry. Bouts are overseen by Jeffery the Referee, who appears very excited to watch these folks fight.

“I like to say it’s our take on Pokémon,” said Sommer, “or what Hearthstone (2014) did to Magic: The Gathering (1993), we’re trying to do to Pokemon. Which is basically take the root of it and strip it down a bit and tweak it.”

Bravery Network is the first game by the Gloam Collective, a supergroup made up of Sommer, Taylor Bai-Woo (creator of 2015’s I am dead where are my keys), Alex “Droqen” Martin (creator of 2013’s Starseed Pilgrim) and Kelly K.

You can look out for updates on Bravery Network on its website.