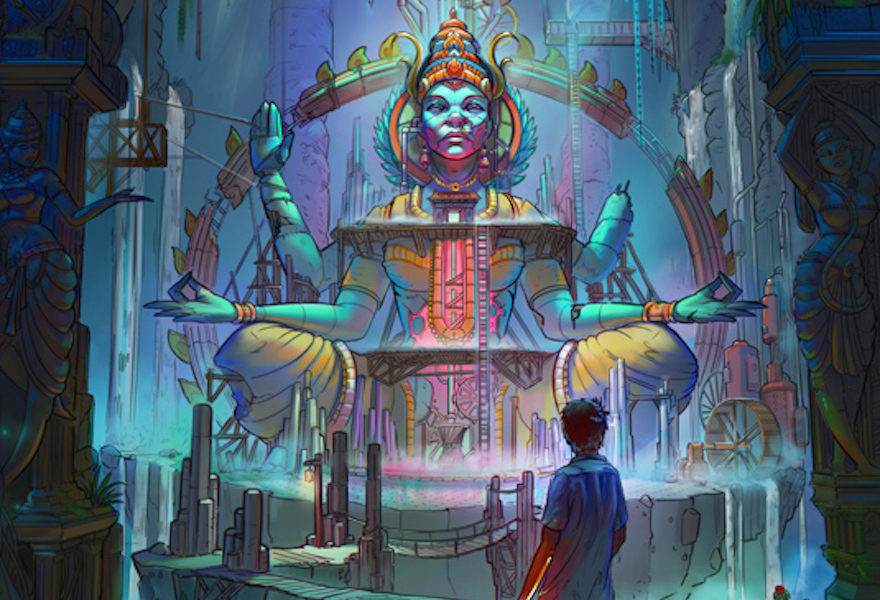 In 2013, the Sri Lankan newspaper The Sunday Times interviewed Avinash Kumar, an experimental VJ (video jockey) from India, about a project he was heading: a short story that became a graphic novel that became an album with his audio-visual collective BLOT!, which then became something else altogether. The story was said to center on a South Indian man with synesthesia who went to Mars. “It’s become so much larger,” Kumar told the newspaper then, as a result of his initial concept of “Future Botanical” running away with itself.

Fast-forward to 2016. On June 14, a game called Antariksha Sanchar (Transmissions in Space) appeared on Steam Greenlight, describing itself as an “Indian point-and-click cultural adventure game.” Its inspirations are cited as mathematician Srinivasa Ramanujan and classical dancer Jayalakshmi Eshwar. The first teasers are of something dark and atmospheric but not haunting; slow-clicking instruments and cartoonish characters gently bobbing their heads give the distinct impression that this is a game about curiosity, about looking for something.

Of course, as you have probably guessed, Antariksha Sanchar is the product of Kumar’s experimentation, the first widely available example of the story that has been blossoming for the past three years. It has grown from quick and intense sketches on his Instagram into a pursuit supported by Indian developer Quicksand GamesLab, which pursues exploratory play-related research within Quicksand’s interdisciplinary consultancy. The demo was launched and praised at Sheffield Doc/Fest 2016, and seems set on getting Greenlit. If it delivers on its promises, it will not only be a welcome addition to the point-and-click genre, but also a rare example of a game set in South India.

Making a good game is a remarkable goal, and Kumar is well on his way there, but take a closer look and it becomes only a fraction of what he has in store. The game seems to be subtitled “Episode Zero” for good reason. Antariksha Sanchar, the website says, “is the first episode of our transmedia cultural experiment—amplifying India’s timeless philosophies and vibrant mythologies.”

“the first episode of our transmedia cultural experiment”

In an interview with Brown Paper Bag, Kumar calls the game’s website an “almanac.” It links to 3D models inspired by his research in South India because he aims to build a virtual museum. A Soundcloud playlist samples dancer Jayalakshmi Eshwar’s repertoire right alongside contemporary electronic musicians, and is described as a “repository.” Take a look at the Instagram that he uses as a design log and you’ll find more evidence of transmedia work: a shirt that he jokingly referenced in the article from 2013, mash-ups with pulp science fiction magazines, and a wind-up drummer with unclear connection to the story’s mathematician protagonist, a remnant of his early job as a toy designer for UNIDO. He was profiled by Mid-Day due to his use of gaming to interrogate Indian culture, by scroll.in for his recent success at Sheffield Doc/Fest, and by form, the legendary German design magazine, because his “audio-visual gift” and his commitment to creating a “serious” game. And in the middle of all of this, somehow, he settled on a September release.

Antariksha Sanchar isn’t just India’s first major videogame. It isn’t just a cultural adventure, or a magical-realist experiment, or the result of three years of hard work on Kumar’s part. It isn’t just a tribute to his mother—whose dance production alongside Jayalakshmi Eshwar inspired the project—or to his country, which has been so long ignored by contemporary videogames. It’s a colossal effort that has grown like the extraterrestrial flowers that inspired it, medium after medium after medium coming together to tell the story of India’s most famous mathematician looking up at the stars.

It will be out in September, or maybe it won’t: it was earlier slated for a release in June, and the development time is long enough that a few months here or there seem insignificant. This project wants to take us to Mars. That’s worth waiting for.