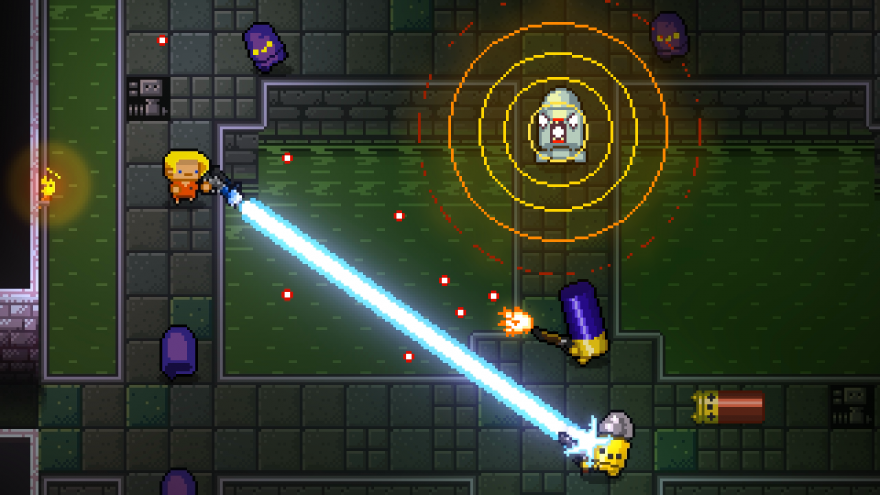 By all indications at PAX East, we appear to be living in the Year of the Top-Down “Roguelike” Shooter. Some of these games have been in early access development for multiple winters, a couple of sequels are floating around in the mix, and others still are announced by the day. Each ticks the requisite boxes: shitloads of projectiles, differing levels of procedural level generation, and a colorful pixel-based aesthetic. To be fair, these are important milestones for my personal interest and enjoyment, but one game in particular nudged itself above the rest with a more focused and deliberate approach: Enter the Gungeon.

“A lot of people actually think they’re lipstick at first,” Dave Crooks says, referring to the shotgun shell enemies from his game. I didn’t immediately pick up on the ammo-themed bad guys myself, which sweetened my chuckle a little when it finally dawned on me: this is a dungeon of guns, so of course the halls are stocked with anthropomorphic bullets, shotgun shells, grenades, and more. It’s silly and that’s one of the reasons it’s so appealing, but it’s easy to miss because the bullets are shooting at you a lot.

The halls are stocked with anthropomorphic bullets, shotgun shells, grenades, and more.

Questionably clever wordplay isn’t really enough to float to the top of this bulging genre though. What set Enter the Gungeon apart for me was its combination of the best bits of other twin-stick dungeoneering games. The influence of Nuclear Throne and Binding of Isaac’s mayhem is freely admitted by Dave, but his game seeks to synthesize its peers while maintaining a cheeky tone. “I love Isaac, but a lot of people had problems with the subject matter. We wanted to try something a little more lighthearted.” In that sense Gungeon succeeds as it pokes fun at the idea of grizzled human war machines plowing through hell by putting firearms as the enemy and the weapon, the disease and the cure.

It’s not enough to simply shoot well, though. Dave says they’re also pulling from “bullet hell” titles like Ikaruga, where there will be far too many bullets to just pirouette your way around. Gungeon is a more deliberate, structured experience based around a mechanic so important to the developers that they named their company after it: the dodge roll. The move is crucial not only for sailing over spiked trenches or to avoid pit traps at the last moment, but it’s required to surpass most of the bosses. While your character rolls through air they are temporarily invulnerable, so it serves a greater function than getting around faster. A little Neo from The Matrix and a dash of Dark Souls and you’re off weaving through the hail of lead. Many shooters have something similar, but you can pretty much stick by a single bottleneck and peek out every now and again to plug your target. Gungeon requires more finesse.

Each level also taps into what makes both random generation and more nuanced and level-design so satisfying to traverse repeatedly. The environments are more structured and ripe with interactivity, stuffed with traps and objects like tables that can be flipped over to create new cover, though the enemy bullets are rather sharp and will do the same. More than just square after square with the occasional bottleneck to mow down, each of Gungeon’s rooms a bit more intricate while staying consistently fresh.

Enter the Gungeon is especially tight for having just entered the alpha stage, and draws enough from its predecessors to remain familiar while taking distinctive steps towards something more refined. As more games like Binding of Isaac pop up, Gungeon is aiming to remix the best elements from each with charm to spare.