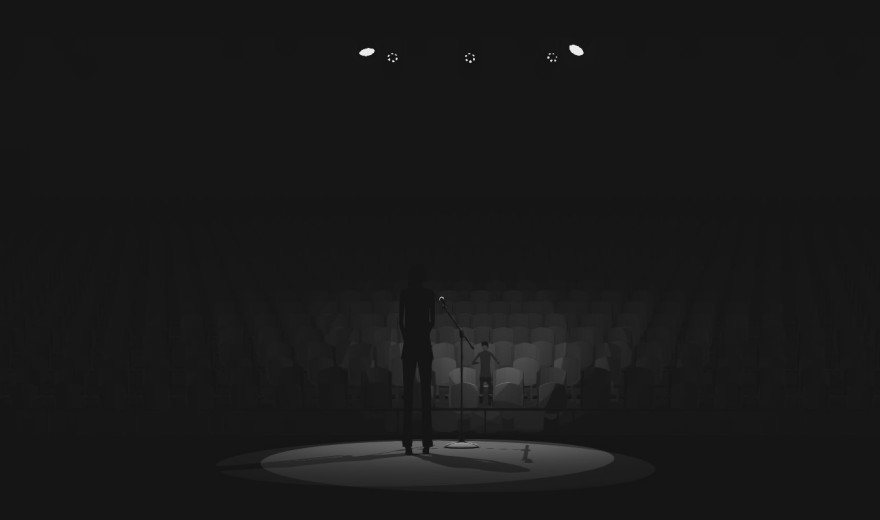 A large part of performing is seldom talked about. Yet, it’s as important to the art as how well you can sell your every line and gesture to an audience. Perhaps moreso. I’m referring to those moments of anxiety just before you hop on to the stage. You’re behind the curtain, you can see your spot lit up as a circle in front of you, your breathing is out of control, your guts are trying to run in the other direction.

it’s eating him up.

These pre-performance jitters can be a monster that swallows you whole, especially when inexperienced. So how do we overcome them? Some have found the answer in extraordinarily specific rituals, such as wearing odd socks, eating a set number of berries, and stretching their limbs out for half an hour before they face the music.

To help quell his own nerves, Zach Sanford made a videogame vignette that addresses the subject head on. He’s currently in that horrible, inward-looking phase between productions right now, and it’s eating him up. Last year, he made his first ripples in the ocean with Three Fourths Home, a narrative-focused videogame about family, life, and tragedy. Now he’s having a “difficult second album” type of tussle while working on the follow up, To Azimuth.

Although he’s only half of [bracket]games (the other being composer Neutrino Effect), Sanford feels a lot of the pressure that comes with living up to the increased attention that the studio has obtained for itself is falling on his shoulders. To remedy, he spent five days working on Enter, Stage Right. It’s what he refers to as “an exercise in making a game without words after making several very word-reliant games.” He wanted to prove something to himself.

Enter, Stage Right has you standing at the back of a line for a stage audition. Everything you see and hear is stripped back so as to bring attention to the degree of hyper-focus this woman is expressing during these tense preliminary moments. So it’s black-and-white, there are initially no controls on show, and you aren’t told a thing. The person who showed you to the line disappears and shuts the door behind her. Silence. You think to yourself: what am I supposed to do here? Turns out there’s no tutorial for dealing with anxiety.

you need to hold in there with her

Ahead of the woman, in the line, are silhouettes routinely gesticulating in a most erratic manner. Conversely, the woman is still, rubbing her hands together, head dipped towards her feet. She’s a bundle of nerves. Then the line moves forward and your role in this scenario emerges as circled letters appear at the bottom of the screen. You press the keys or buttons that these symbols refer to, and hold them down together, sometimes contorting your fingers in awkward displays. As you do this, the camera zooms closer to the woman, you hear her heartbeat, and the edges of the screen go hazy.

Should you let go of the buttons, the woman immediately flees from the line, losing her nerve. So you need to hold in there with her, and to a greater extent, for her. You feel connected to her in these moments, as if you’re at her control center, holding everything tightly together as she falls apart. You are soothing the knots in her stomach, easing her jaded thoughts, and composing her body ready for her performance.

Once you’ve got through this and she finally takes to the stage where she must leave you, you unlock a “Side B” to the the game. It starts out the same way, but when the line moves forward this time you are unable to interact at all. It’s a cruel divorce. The camera gets its closest to the woman, almost as if it’s inside her head, as you desperately search the keyboard for a grip. All you can hear are her inner organs in this enclosed space—you’re so close, yet so far. Eventually, you accept that you can’t change this endless, agonizing pose. And so the painful lack of interaction seems to be a way of communicating the idea that we can’t always quell the anxiety of others, as much as we may want to.

You press Escape, exit the program, and leave with the knowledge that she can only help herself now. Sanford, too, is in this position. We can’t help him to make To Azimuth . He knows this. So he’s trying to find the button that can be pressed to get him through it, whatever that may be. Until then, he’s lost in his own doubts, scared of the stage that looms within view. All we can do is watch.

You can download Enter, Stage Right for free on itch.io.