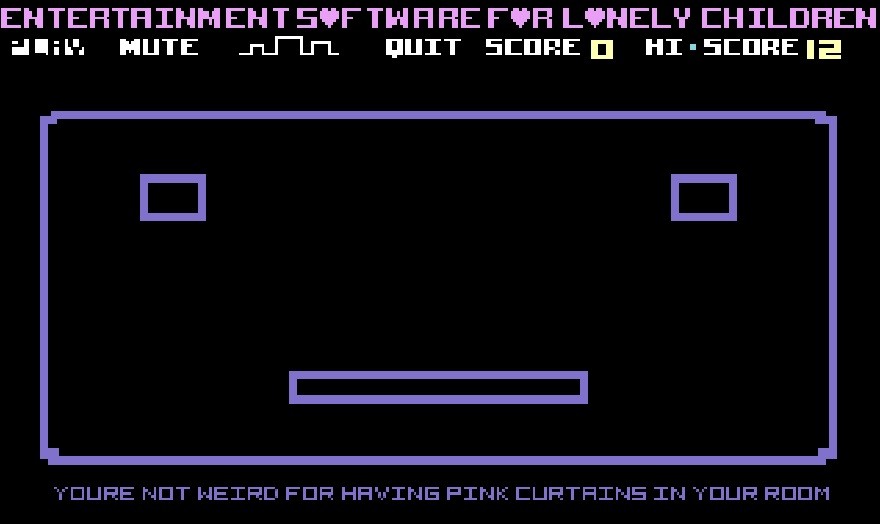 There may not be a greater intimation of loneliness than a child attempting to play a videogame that was designed for two persons. Picture them sat cross-legged in front of an old boxy television, completely by themselves, attempting to rush their limbs across two gamepads, and sighing with their entire torso when the effort produces no satisfying interplay. See that kid? It’s me.

Not just me so it turns out. Folmer Kelly is also that kid and, I suspect, are so many other insular folk out there. Perhaps this includes you as well? Kelly gets a mention as his Ludum Dare 31 entry Entertainment Software for Lonely Children sees him revisiting that childhood pastime.

It’s a change that reflects the appropriated goal of the single, lonely player

More than nostalgia, it’s firmly framed as more of a wish fulfilment, with his current mindset as an adult playing a somewhat regretful narrator. Essentially, it’s Kelly’s answer to the question: what would you say to yourself when you were a kid?

Kelly’s boyhood haunt is two-player Pong. And so it’s this classic arcade game that acts as an electronic conduit through space and time, transporting us back to his youth as if it were the Ghost of Christmas Past. Not that it’s particularly demanding on the artist, but Pong is recreated faithfully here as you’d expect from a person who has had it so grossly burned into their forethoughts. The bare and bold lines—now pink and with kinks at the corners— form that recognizable playing court; two squares abreast a ubiquitous voidspace.

The most divergent and noticeable idiosyncrasy is the way the score is tallied. Rather than points being rewarded to the player that bats the pixel-square ball past the opposition, the points ascend with each successful rebound. It’s a change that reflects the appropriated goal of the single, lonely player to this two-player set-up; rallying with themselves for as long as possible.

Also re-purposed for the solitary individual are the controls. “I tried to simulate the frustrating difficulty of having to deal with two controllers at the same time, but for one player,” Kelly writes. He manages this by having both bats dictated by a single control set, but the up and down movements of the right-hand bat are inverted, while the left-hand bat moves upwards as you’d expect when pressing up, and vice versa.

Adjusting your balance to these topsy-turvy controls takes some getting used to, and so it’s almost a given that you’ll miss a rebound at some point. When you do, the court is transformed into a child’s oblong head, and a message from the adulthood Folmer Kelly is written along the bottom.

“Remember that most people are too worried about themselves to worry about your appearance or mistakes,” reads one of these messages. I found myself nodding along with the wisdom in those like that previous one. If only I could have secured my worries as a child with the knowledge I have now.

There are others that had me chuckling along at how familiar they were. These were those that concerned behavior that, I had thought, were exclusive to me as a child, then being revealed as something more universal, at least for us lonely kids. Such as the rascally, “Stop lying to get attention. You’re getting too good at it.” It’s worth playing if only to see yourself in these messages. But it also, hopefully, acts as a qualifying reminder of how you’ve matured over the years. Has that loneliness ever left you, though?

You can play Entertainment Software for Lonely Children on Newgrounds. It can also be downloaded for free on itch.io.