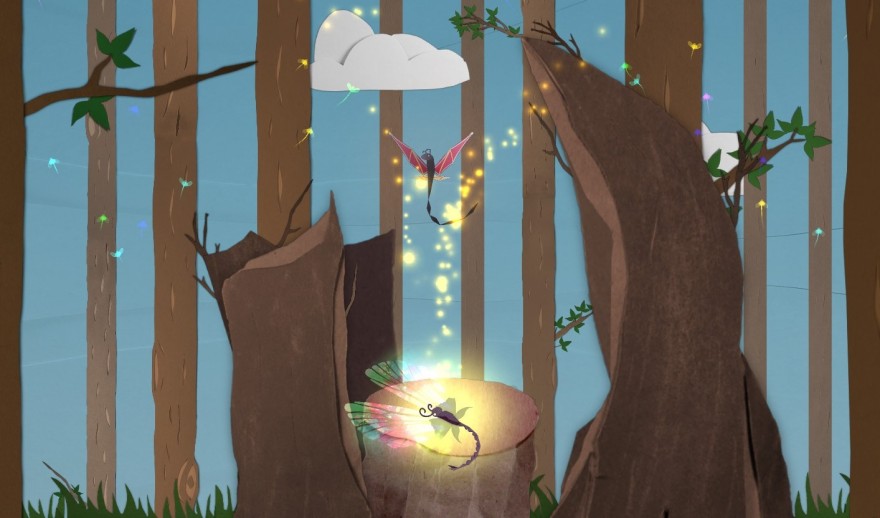 Oh, we’re flying! My word, we’re kissing tulips, bouncing from their buds in matrimony with the exhilarating bends of an electric guitar. This scene in Ephemerid, during which its two starring mayflies trail glitter across the clouds as they frolic, has all the energy of being young and in love. I’m still grinning about it as it wheels around in my head.

You know how kids get caught up in certain emphatic songs in Disney’s big animations: “A Whole New World” in Aladdin, or “Let It Go” in Frozen? I’m feeling every bit of obsession with this glorious scene that they do with those songs, I’m sure of it. I need an adult to annoy for the next six months by pretending I’m one of the mayflies, jumping all over the lawn and crushing their petunias. They’d be mad but it’d be worth it.

tap out your own tunes on fluffy clouds in the sky.

Honestly, before I had played Ephemerid I wasn’t so sure it was going to pull me in, and certainly not in the way it has. That’s because it needs to at least be seen in motion, and even then, you won’t be able to appreciate the cute details of its animation. This is an insect’s world made of cut paper, felt, and glass. A spider is held together by drawing pins while white chalk adds hairy detail to its black paper body.

The game’s creator, SuperChop Games, says that the focus on textures was chosen to encourage players to interact with the world. You know, reach out and touch it, give it a rub with your fingertip. It’s necessary as there’s no tutorial and not a word is spoken throughout. SuperChop doesn’t want to tell you a thing. And the studio isn’t afraid of letting you play around with rustling leaves or to tap out your own tunes on fluffy clouds in the sky, either.

The music is a big part of this enormous act of suggestion. It’s the great conductor: providing rhythms for you to match (without punishment), and filling in for the words with the big sound of classic stadium rock. Somehow, and I know it sounds a little ridiculous, it all tells a coherent and wonderful story. Oh, did I mention that Ephemerid is a fairy tale rock opera about the short but passionate life of a paper mayfly? Yep, it is. Imagine Meatloaf by way of A Bug’s Life.

I feel that I’ve already elicited all the vigor contained in its more uplifting set pieces. But it also has big tragic scenes with tearful guitar solos wailing out all the emotion it can. As with most narrative arcs, it takes you up, and it takes you right back down before rising to the final crescendo—you go through all the dramatics of an entire lifetime in shorthand. And at every moment the use of color, small playful interactions, and illustrative animation sings together like a chorus.

At 45 minutes long it’s a compact experience, too. That may seem short to some. But heed the words of its creators when they say to treat Ephemerid like you would your favorite album. That shouldn’t be too hard considering that it actually is an album of original music. The level select is even made to look like a vinyl disc. The only difference between it and an actual album is that it brings together your eyes and fingers to further appreciate the motions that the songs weave, calling upon your other senses to round out its big hitters.

You can purchase Ephemerid on Steam and the App Store. You can also check out its website.