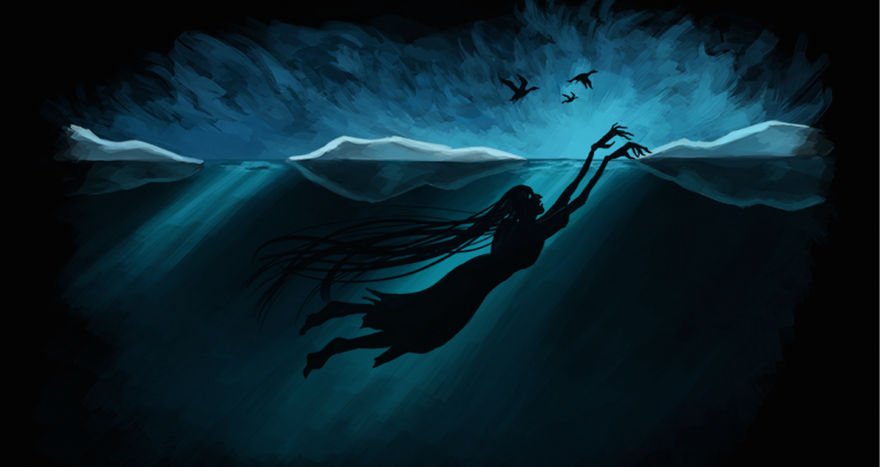 If the blistery winds of winter have reached you, wherever you are in this wide world, then take my advice: grab some hot cocoa (the kind with little marshmallows on top), download Bravemule’s interactive fairytale Beneath Floes, and gather round the fireside of your laptop.

A hypertext story made with the Twine engine, Beneath the Floes combines the dramatic experience of oral storytelling with beautiful illustrations and sound design. Imitating the flexibility that often characterizes orally told stories, Beneath Floes sometimes gives the player/listener the option to change the symbolism, imagery, and even the action in the narrative. Sometimes, the narrator even comments on your choice, noting how it casts a different light on the tale.

Bravemule, the multimedia collaboration organized by writer Kevin Snow, is no stranger to virtual storytelling. Last year, they released The Domovoi, which brought a Slavic legend to life. This time, they’re tackling eastern Arctic mythology, with the tale of the qalupalik, a fish woman who steals children that do not listen down into her lair beneath the ice.

The second-person point of view, unique to the storyteller-listener dynamic established, works wonders for Beneath Floes. It allows you to slip into the skin of this young, wayward protagonist with ease. Aside from the chilling sound design, the words themselves are presented rhythmically, emulating the master oral storyteller’s attention to tempo and cadence. The major beats in the story make for a gripping experience that’s sustained throughout, the call of the qalupalik as bewitching as it is frightening.

The words are presented rhythmically, emulating the master oral storyteller’s attention to tempo.

Set on the Baffin Island off the coast of mainland Canada, Beneath Floes derives its tale from the indigenous Nunavut culture of the region. Bravemule also launched a Kickstarter to coincide with the story’s release, seeking funds for a localized version of Beneath Floes in the native Nunavut language of Inuktitut. Bravemule writes that “Nunavut is full of people young and old who play games on a regular basis. Localization into Inuktitut will allow them to play Beneath Floes in the language they speak at home.”

Though Beneath Floes focuses on Nanavut history and mythology, the story also features incisive hints of the modern. Set in 1962, it only makes sense that the main conflict would entail a Superman comic book. These inclusions help to capture the culture more realistically: a blend of the ancient and the contemporary, rather than some fantastical place existing outside of time and space. To an uneducated listener like myself, who hadn’t explored Nanavut culture before this experience, it removes the sense of otherness that too often imbues media about inuit societies.

Though, one thing is for sure: if I ever visit Baffin Island, I’m staying far, far away from the shoreline.

You can play Beneath Floes through Bravemule’s website or download it on itch.io. Though they’ve already reached their Kickstarter goal, you can donate more here.