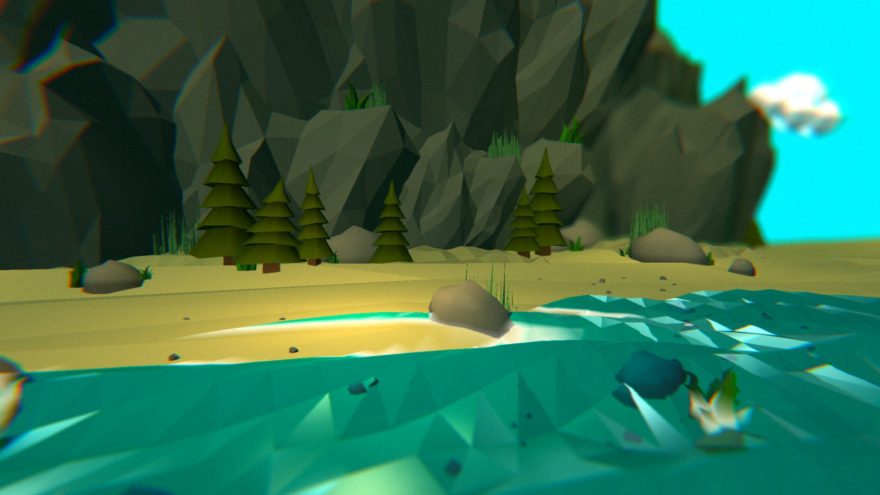 If you’re being overwhelmed by all the presidential election noise today you might be looking for a temporary escape to another world. Small Radios Big Televisions should prove an adequate host.

Out for Windows and PlayStation 4 as of yesterday, Small Radios Big Televisions doesn’t have just one world for you to explore, but several. Inside its depopulated factories you’ll come across cassette tapes that act as plastic gateways into these dreamy realms—each labelled with a single descriptive word like “ROAD” and “COAST.” Upon finding them, you watch as they’re slotted into the tape player, the reel unwinding to the glitchy chorus of data bending: scanlines wobbles across the screen, electric fuzz dances along textures, then you’re warped to another place.

You can hang out at the singular scenes contained in each tape for as long as you like, taking in the woozy music, daydreaming into oblivion. The game is conducive to being used in this way, its scenes and sounds looping meditatively, it allowing you to play with just one hand on the mouse, pulling at the tops of springy trees for no real purpose. But eventually you’ll have to snap out of it and do what you went there for, and that is to find the gems hidden inside each world—and sometimes that requires you to corrupt the tape. With those, you can unlock doors to new passageways into the factories, to new tapes, new worlds.

You can read more about how the game plays out here. But if you need instant chill right now then perhaps the GIFs below will help you out.

You can purchase Small Radios Big Televisions on Steam and PlayStation 4. Find out more on its website.