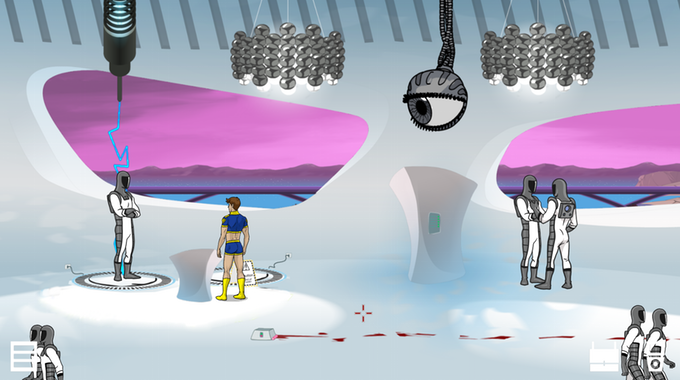 The creator of the incredibly named My Ex-Boyfriend the Space Tyrant is currently funding a follow-up: Escape From Pleasure Planet.

Escape from Pleasure Planet follows the story of Captain Tycho Minogue as he battles the devilish (and dangerously handsome) criminal Brutus, who he must track down. For Luke Miller, the creator of these gay-themed science-fiction adventure games, there was an easy connection to be made between the nature of both narratives.

wants to touch on issues relating to the gay community

“I was looking for gay and science fiction themes that were complementary to each other,” Miller says. “In the gay community there’s often hedonism combined with repression. The kid from the small country town often goes most wild when he moves to the city. In sci-fi there’s often a utopian world with its own terrible secret. Combining the two was an ‘aha!’ moment and I think the twin threads provide a fresh take on each other.”

Aside from the classic science fiction pulp that informs Escape from Pleasure Planet, there’s also a clear thread from adventure games like Day of the Tentacle (1993). Players will interact with 30 worlds and many different characters throughout the grander universe. The game promises to have a diverse cast of characters—it is gay-themed and wants to touch on issues relating to the gay community after all. Escape from Pleasure Planet is just hitting the topic through the lens of Venus flytrap-like planets and attractive space criminals.

You can find out more about the crowdfunding for Escape From Pleasure Planet at its Kickstarter page.