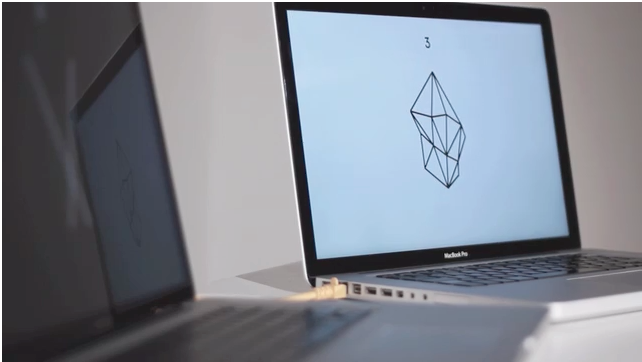 A duo of interactive media artists have pitted two Macbook Pros against one another in a never-ending game of rock-paper-scissors. There is an algorithm that picks between paper, scissors, or rock running on both computers, which are connected by an ethernet cable. The winner gets a point.

Going by the moniker WeARE Medienkuenstler, Moritz Schell and Frederic Seybicke are from Weimar, Germany. They got their start in the world of installations not as aspiring artists but trying to have a good time. Their first works weren’t meant for museums but house parties, so those in attendance could visualize their arms as tentacles while getting down to house music. Other projects, such as a racing game played with a steering wheel on a slide projector, are worth checking out.

The rock-paper-scissors setup uses a random-number generator, illuminating the need for any guess work. Nevertheless, it’s a useful thought experiment. When the human interaction is taken away and just the rules remain, the game is unchanged, but it’s so much less. There are no mind games involved, no picking up on other’s patterns, no testing your perceived psychic ability. But the wireframe rock looks so much cooler than a fist.