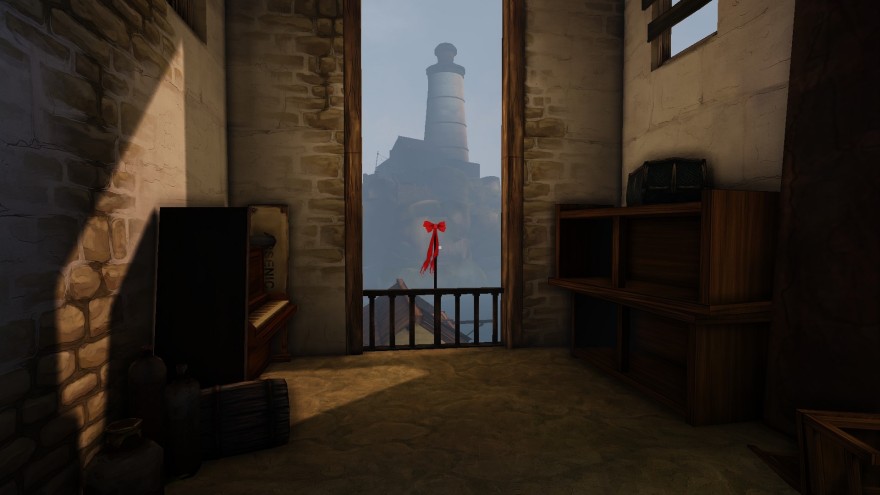 One way of playing Ether One would be to slowly explore Pinwheel—a small Cornish mining town in the 1960s—looking out for and collecting all the red ribbons scattered around the harbour, industrial area, and village.

The story you’ll follow is of a Restorer, sent into the mind and memories of a woman with dementia in order to fix it; the red ribbons are memory fragments. You’ll also experience the unreliable guide, who sent you into this mind, wavering from having faith in you, to sharing her sister’s battle with dementia, to reminding you that failure means funding will be taken away from this groundbreaking project.

This few-hour glide across Ether One is comparable to Dear Esther, but with more freedom of exploration, and a twist ending that arguably negates some quibbles you may have with the weaker plot points.

But that isn’t the optimum way to play Ether One.

Inside Pinwheel are stories of struggling families, conflicted wardens, and the experiments of Alexander Graham Bell. It’s a town-sized Gone Home; most houses are fully explorable, and have poems, scribbled folk songs, and letters to read, as well as items to pick up and rotate. There’s a school, cider barn, church, the locker rooms of miners, a blacksmith, a fisherman’s export house, toy boats in the river, a cinema that’s about to close down, and the stories of monsters that children spread to scare each other. It’s very Dickensian, as stories are weaved around how terrible the working conditions of the miners are—sometimes leading to deaths—and how jolly the whole town is as it preps for the upcoming May Day celebration.

But you aren’t handed these details on a plate. All of the items and notes you find are parts of small puzzles. The idea is that you recreate a sequence of events or put huge, growling machines back into use one last time, and by completing a few of these narrated puzzles you’ll restore a projector, which displays a precious item that validates the memories of the patient’s mind. As the puzzles are optional, White Paper Games has taken the chance to completely let go of your hand and allow you to piece them together with lateral thinking.

It can be tough, as items sometimes need to be taken from one side of town to the other to solve a puzzle, and you have to make this connection by absorbing as much information as possible. Luckily, you have the Case. It’s a space between realities that can be warped to at any time, and where any number of items can be stored and collected. Think of it as a 3D inventory screen. This helps alleviate the sparse interconnections of the puzzles, but I do still think a little shove in the right direction would help at times.

Still, it feels great upon being rewarded with the refreshingly mundane trifles of people of a different time, struggling to hold on to traditional industries when everything else in the world is modernizing.

I found myself getting attached to a miner known as Sean V. I first learned of him when exploring a florist’s, where he had bought a bouquet of flowers for his wife. Later, in the mines, I discovered he felt the warden was treating him unfairly, and he was rebelling slightly. But the warden isn’t the bad guy he’s made out to be; he’s being tough on the workers so that they can keep their jobs. And he names Sean V. as one person he’s being harsh towards because he knows of the great love he and his wife share. He’d hate to see them without the income to support themselves.

Ether One lets you invade the lives of others. You’re already in someone’s memories, so why stop there? There’s a whole town’s worth of gossip to catch up on: private thoughts, forbidden love, the devilish plans of children. If you can put the puzzle work in, you’ll become happily entangled in the web that ties together the inhabitants of Pinwheel and their ordinary lives.

You can purchase Ether One on its official website.