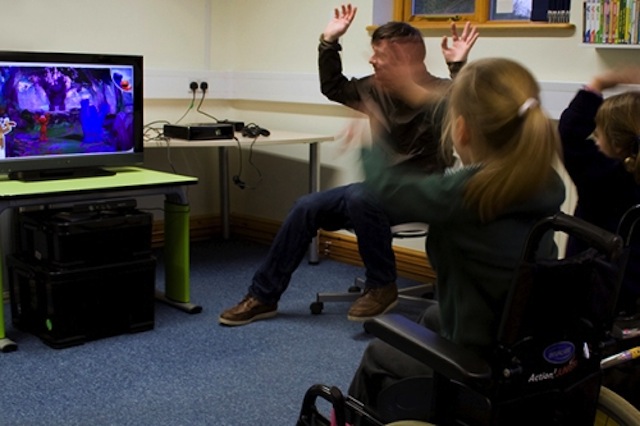 Navigating London’s Eurogamer Expo and its miles of wiring, megawatt-years of lighting and acres of high-definition screens, I manage to walk past Special Effect’s display space a couple of times, even though it’s first on my agenda.

There’s a reason Special Effect doesn’t come equipped with the usual game show garnishness. It isn’t a publisher, or a developer, or an energy drink hawked by booth babes. It’s a charity.

More specifically, it’s a charity with the aim of providing assistive technology for gamers with severe physical impairments, an area that CEO and founder Dr Mick Donegan says is a quarter of a century behind other forms of accessibility.

Special Effect works with children and adults to provide personalised solutions to their disabilities. Severely paralysed players can have their eye movement tracked by Eyegaze, which is already used for general computing accessibility. The charity then works with programmers to supply modified versions of games that recognise this input. I try a lap on Dirt 3, reminded of my driving instructor’s advice to always look at the road as far ahead as possible, and tumble into a few ditches before I get the hang of it.

The “exploded joypad” is made for sufferers of muscular dystrophy, which allows very slight movements but not always in the most useful of places, and looks like a set of controls for complicated machinery, or a torture device. It’s hooked up to Portal 2, which means controlling the view with my chin, the portal gun with my left and right shoulders, and forward and backward movement with floor pedals. This is much harder to figure out, and I end up spraying portals in all directions, unable to adjust to the delicate input needed.

These aren’t for me, of course, and Donegan is keen to point out how much these systems can level the playing field for gamers who may not have expected to play again. “No matter how severely disabled they are, they want us to give them the tools, not just to play the game, but to compete.” Later on a boy named Isaac, shows just what the exploded joypad has allowed him to achieve by nimbly besting some of Portal 2’s test chambers.

Donegan says that Special Effect’s presence at the festival is a good example of how gaming is growing up; they self-describe as “the gamer’s charity”, and support from the industry is increasing year-on-year for the five-year-old organization.

Gamers are gamers whatever their ability, but with their newfound accessibility, do the younger breed of Special Effectees just want to play Call of Duty like all the other teens? Donegan concedes that this may well be the case, but is diplomatic: “Before I started, I gave some thought to [this], but actually the same rules apply to as everyone else: we’ll provide the tools, and it’s their decision, or their family’s decision to decide on whether that’s a good thing or not.”

Special Effect’s presence at the festival is a good example of how gaming is growing up.

Around the corner, through the entrance to the over-18s area, there’s a fifteen foot wide war room map table—think Dr. Strangelove. It’s not encircled by heads of the armed forces, but by young men with gamertags on their backs—“judge-jury-345”—playing a Call of Duty: Black Ops II tournament of endlessly recycled death. When kids start pouring into the show after school, I see a bunch crowded around Hotline Miami, a game which imagines the movie Drive as a hypnotically violent clone of the top-down Grand Theft Auto titles.

I’m struck by the crass observation that the charity’s stand seemed to be surrounded by games about killing or injuring humans; about disabling them. Is it any wonder accessibility has lagged behind? Charities associated with videogames find it difficult to get funding from the trusts who traditionally donate money. Before Special Effect came in, Donegan says that there was no-one to bring together gamers, developers and makers of assistive technology.