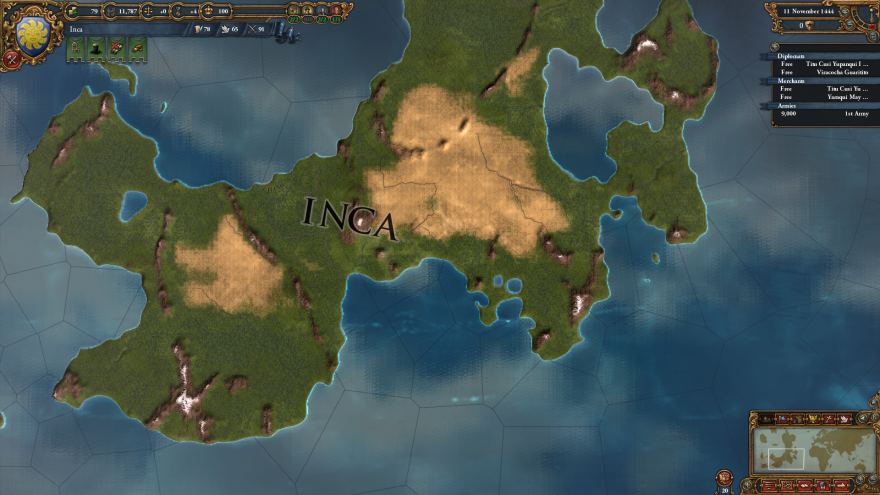 The Portuguese found the New world in April of 1472. By 1512, they held a large chunk of land and several fully formed colonial cities. But while the colonies thrived, the Portuguese kingdom was falling apart at home—so on August 2, 1512, the Portuguese king installed a governor in Mohawk, with the idea that he—the king—could then concentrate on his problems at home, and tax whatever goods the colony produced. That very same day however, the governor, Guilherme de Paiva, with no intentions of being a vassal lord, created the free republic of Haiti, declared himself President and broke free from a Portuguese Kingdom in no shape to protest. De Paiva created Haiti as a republic based on free trade, personal liberty and complete dedication to the Catholic faith. 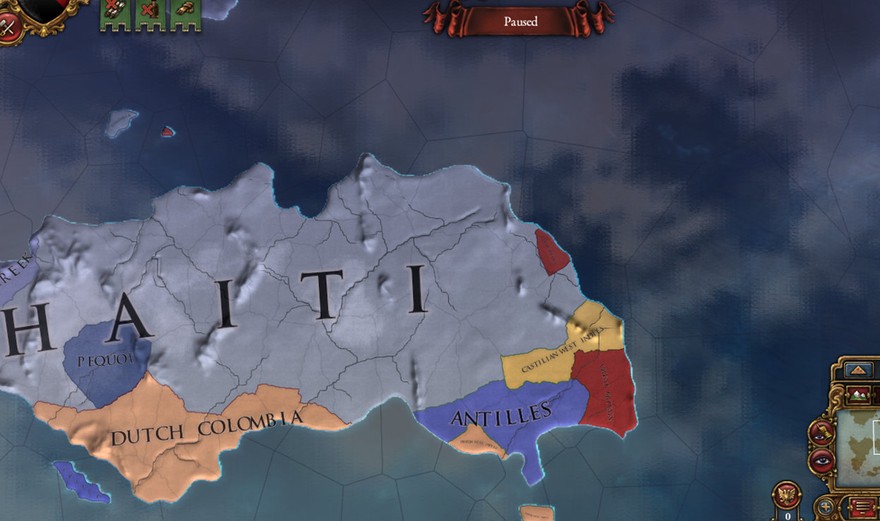 This map is from 1821. The Republic of Haiti has grown by pushing aside whatever native tribes stood in their way, and it has become a world-leading nation. A continent-dominating world power, a safe haven for merchants and a world-leader in military technology—and a place where owning a Bible not in Latin is punishable by burning at the stake. It’s the US formed in the 1500s, built on dogmatic faith instead of freedom of religion and culturally Portuguese instead of culturally English.

I made that happen.

If you are unaware, Europa Universalis IV is a game of world history where you take control of an independent realm in the 15th century and bring it all the way to the 19th, making decisions and controlling armies along the way to change the course of world history. It’s a strategy game but it feels more like a story generator—it rewards play with the kind of grand, alternate history narratives that only a systematic game can offer.

Conquest of Paradise is the first expansion to Europa Universalis, so it has a very clearly defined job to do—to give the game the tools it needs to tell me new kinds of stories—and it does its job well. The tools that come with this expansion deal with the white man’s conquest of America. With it in place, EU4 can tell stories about nomadic tribes of Indians, roaming North America before finding a place to settle down; it can talk about colonial nations trying to break free from their oppressive Old World overlords and spin tales about European superpowers trying desperately to keep their world-spanning empires in check.

It‘s a strategy game but it feels more like a story generator.

It can also tell the stories of unknown lands, with an optional checkbox that generates a unique New World somewhere between Ireland and Japan—so you get a geographical spin to your stories that makes them even better, even more uniquely yours.

Games like Europa Universalis will always be intimidating, but to call them dry is to deny the value of systematically created, unauthored stories, and if you do that, I don’t think we can be friends. All you need is the capacity to see past a map to the systems beneath.

Of course, this game is not all story—at its core it is still a strategy game about territory control, and it’s very much a game that you play. Unless you don’t.

I never controlled Haiti in that game. In fact, I didn’t play that game at all—I set it up in 1444, went to bed and slept soundly knowing that hundreds of AI kings and emperors were creating a world for me.

And when I woke up, in 1821, the story of the capitalistic and dogmatically Catholic republic was there waiting for me—along with many others. In Asia, the Russians had built an empire that reached from the Baltic Sea in the west to the Pacific Ocean in the east to the Indian Ocean in the south; in Northern Europe, Sweden and the Polish-Lithuanian Commonwealth were fighting over the ruins of Denmark; on an arctic island to the northwest of Haiti, the rebel king of Pacifico Norte and the loyal governor of California fight over a few acres of lifeless snow.

I had amazing adventures in the game that I played, and I will have many more in the ones that I am still to start. Europa Universalis IV is so strong that it cannot not weave a narrative, that even when left to its own devices, you come away full of stories to tell. This expansion does its job well: it expands the toolset of the best story generator of last year, and now it has more tales to tell us. You should probably get in and hear them.