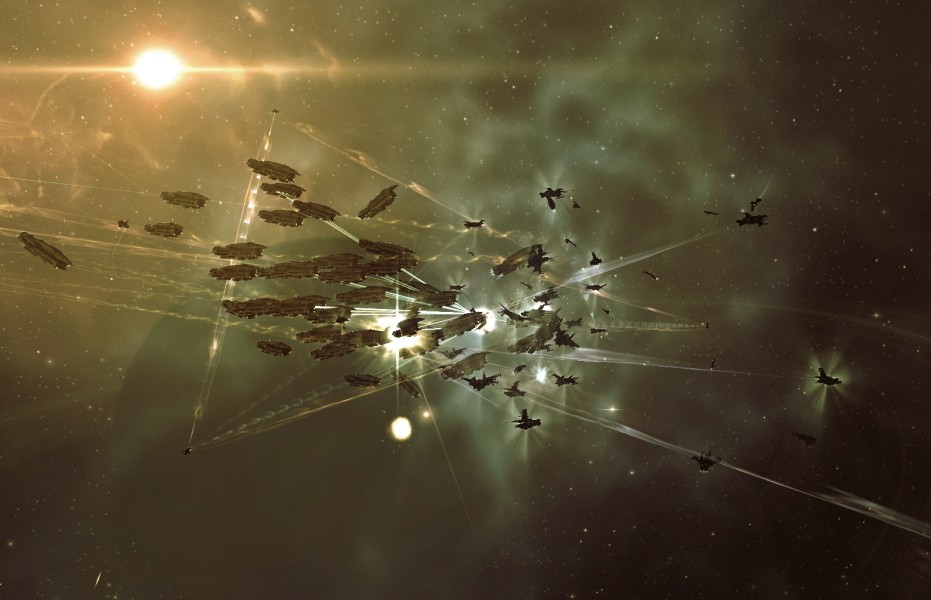 It’s not enough to say that social media is a valuable component to Eve Online. It is its precious lifeblood, pumping into and away from a non-centralized nexus. An amalgam of social networks twists around every aspect of CCP’s massively multiplayer online space opera. The game is notoriously difficult; it can be a snake pit, and the same holds true for its communication lines, as the fiction of the game is lived out in real-time by its players across all of the social networks the rest of us use to post pictures of our lunches. Other MMOs release massive updates or singular events, but a single 24-hour period in EVE produces a Big Bang’s worth of crackling, hissing noise disseminated across various conduits online. In the 11 years since its inauguration, community-minded features have spread throughout videogames—whether it’s the live-streaming functionality of the PS4 and Xbox One, or Nintendo’s surprisingly joyful Miiverse—but none are as dependent on social networks as EVE.

“It’s more of a society,” says CCP spokesperson Ned Coker of the mass population of battlecruiser pilots who (unlike in other MMOs) all play together on the same server. Coker’s job at CCP is to loosely be in charge of this amoeba of social media, if anyone could claim control over such an unwieldy thing. Coalitions bubble up from online communities; the notorious Goon Swarm got its start on the Something Awful forums. And during the Internet-famous B-R5RB battle, while titans were being crushed like cigarette filters, Tweets from higher-ups informed commanders of the devastation. Reddit is a prime recruiting turf. The game has its own radio stations. Players even become famous by blogging: live-streaming an impressive solo run in a rare, expensive ship can seriously boost your reputation in a mega-corporation’s complex political hierarchy. These very hierarchies, by the way, would be impossible for their CEOs to manage without social means of dispatch.

This is why EVE has earned the reputation not only as a great game but a compelling social force. With so many tendrils feeling on top of other tendrils, some truly remarkable interactions occur. There are a lot of conspiracy theories. Says Paul Elsy, EVE’s community manager, “There used to be a rumored group called the 23 who were EVE Illuminati, who basically controlled EVE militarily and economically.” Elsy should know—he was believed to have been part of this intergalactic Illuminati.

The intrigue that another coalition could be and probably is plotting against you in a dark corner of the Internet is part of what makes playing EVE so interesting. Game assets like expensive fleets which take eons of man-hours to produce are gone for good once downed, so the fear of sabotage runs high. The larger alliances with valuable ships have convoluted and exhaustive background checks for new members, Elsy tells me. An average wait can last three months as details like a player’s alternate characters, wallet transaction records, references, and IP addresses are pored over in order to make sure they’re not a spy.

By Elsy’s estimate, there are tens of thousands of double agents designed purely for the purpose of infiltrating a corporation, many working themselves into a position of trust so they can hijack an expensive vessel. But there’s also the loyal, hard-working grunts who mine ice for fuel from 9 to 5 so they can contribute to a grand scheme. To recognize the important contributions of the small fry, coalitions give props in State of the Union addresses, newsletters, and with medals of honor. Mobilizing a 50 thousand-man coalition is effectively like running a micro-nation. “The need for propaganda ministers, human resources, territorial controllers, and taxmen arises,” says Coker. And so the bureaucracy fuels itself, pinging, broadcasting and giving orders across social media.