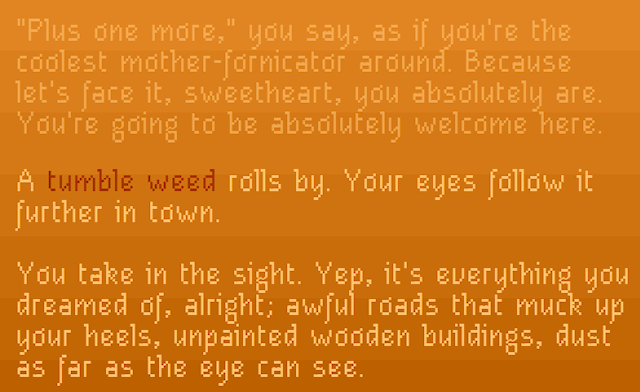 Blazing Saddles, The Three Amigos, perhaps WestWorld. These are the great Western spoofs, and now games have their own parody of the gritty genre about the American West’s sharpshooters, Sheriffs, and tumbleweeds. It’s called Even Cowgirls Bleed, a short, funny, poignant adventure game from Christine Love, “a blatantly homosexual young woman” game author from Toronto.

You may know Love as the developer of racy visual novels that challenge one’s conventions, such as Digital: A Love Story, the only romance novel to be told through a dial-up modem interface, and Analogue: A Hate Story, a feminist critique set on a Korean spaceship and involving androids. A classic text adventure crossed with a shooting gallery game (your cursor is a crosshair, which triggers a chunky gunshot sound-effect when you, for instance, shoot a ten-gallon hat off the head of a condescending gentleman), Even Cowgirls Bleed is cut from the same motley fabric. And though the West is a new frontier for Miss Love, it finds her covering familiar territory: unbridled expectations, lesbianism, jilted love.

The heroine, a promiscuous, quick-to-the-draw, self-destructive cowgirl who lacks savoir faire, or as she’s described in the game, “just a dumb city bitch,” is too autobiographical to say she is an alter-ego of Love’s. “Well, the heroine in the game is me, and just like her, I am definitely not the cowgirl type!” Love tells me.

There are slight differences however. Unlike her city-slicker counterpart, Love is untalented with guns. “I couldn’t hit the broad side of a barn,” she says. Though she had some practice as a scout in her youth, shooting cans withs a 12 gauge and targets with “a dinky little .22,” her life as a NRA donor was not to be. “I didn’t really enjoy it that much. Certainly not enough to bother putting any more effort into it,” she says. “It turns out, target-shooting is actually super-boring!”

Her portrayal of heartbreak, contrarily, is real. “The whole thing is based off something that happened to me with a girl in real life. It left me feeling pretty shitty, and. . . well, here’s the thing about crying yourself to sleep: it seems like it’d work eventually, but mostly it just gives you insomnia,” says Love. “So after the second or maybe third night of that, I decided I was sick of crying and decided to funnel those feelings into something productive.”

That something productive was Even Cowgirls Bleed. She stayed up and put it together using Twine, the hot new user-friendly text adventure game editor. She admits it was “pretty self-pitying, honestly, but it was also extremely cathartic.” However, author’s intent and what the player takes away are often two different things, and this player found a charming, kitschy outburst of creativity that frolics with tropes of two ancient genres: the text adventure and the Western. This is especially true of the gory ending, which is unsolvable and sad.