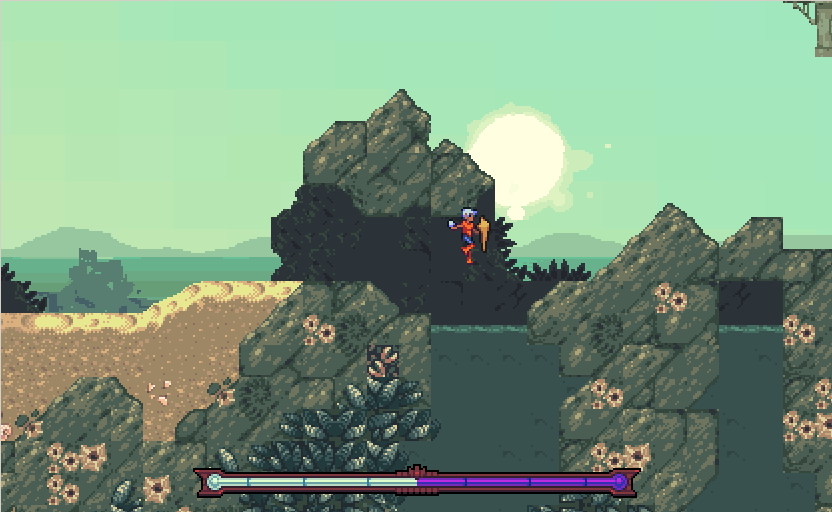 The Taoist concept of yin-yang rarely appears in videogames with meaningful intent. Usually, the familiar circular black-and-white symbol represents a power-up, or can be painted onto the side of your gun in the customization screen. It’s tacky at best.

Sean Hogan and Jon Kittaka may finally be doing yin-yang—the concept rather than its icon—some service in their game Even the Ocean. Rather than a shallow fetishization of Asian philosophy and religion, Even the Ocean seems to embody the concepts, perhaps even teach them through level design. As such, it’s not a single game, but two packaged as one. Like a tape with a Side A and Side B, if you will.

Parkour, too, reinforces the themes of flow and being at one with your environment.

“Even” is a slice-of-life walk-and-talk adventure game that follows a young woman around a fictional seaside town. “The Ocean” is a longform platformer that moves between ambient exploration and more testing gauntlet areas. Two characters in the same world exploring similar themes through different means. Each game is played separately, but they each inform, contrast, and build upon the ideas explored in the other.

Unfortunately, Even the Ocean exists only as a Motion Demo at the moment. And it’s the fundamentals of the latter game, The Ocean, which is revealed within it. Rather than giving away too much of what’s yet to come, Sean and Jon have taken a leaf from The Stanley Parable and its demo, and crafted demo-exclusive areas that introduce The Ocean‘s mechanics and feel.

Again, it’s a game about balance—yin and yang, Dharma. This is immediately present in The Ocean‘s main mechanic. Rather than a health meter, a bar that contains both purple and white energy sits across the bottom of the screen. If you fill it with too much of either color, you’ll die and restart from the last fire you saved at. Ideally, then, you’ll want to maintain an equilibrium. But the level design encourages you to push these boundaries as you explore the diverse landscapes with parkour-like techniques. Parkour, too, reinforces the themes of flow and being at one with your environment.

Increasing one color gives you a higher jump but a slower running speed, while more of the other color has the inverse effect. You can alter the amount of either color by running through weeds, and bumping into plants and contraptions, absorbing it from your surroundings. At times you’ll need to employ a higher jump to reach a platform, or a doorway will suck out one of the colors in order to activate and open the way.

Sean and Jon say that “Even the Ocean is looking at the theme of balance in humans’ every day lives (how one manages relationships, emotions, etc.)”. This will be explored in both games, but its The Ocean that manages it through playful interaction, turning familiar game mechanics into metaphors that teach the foundations of Hinduism, Buddhism, and Taoism, and other religions.

You can download Even the Ocean’s Motion Demo here. More information can be found on its website.