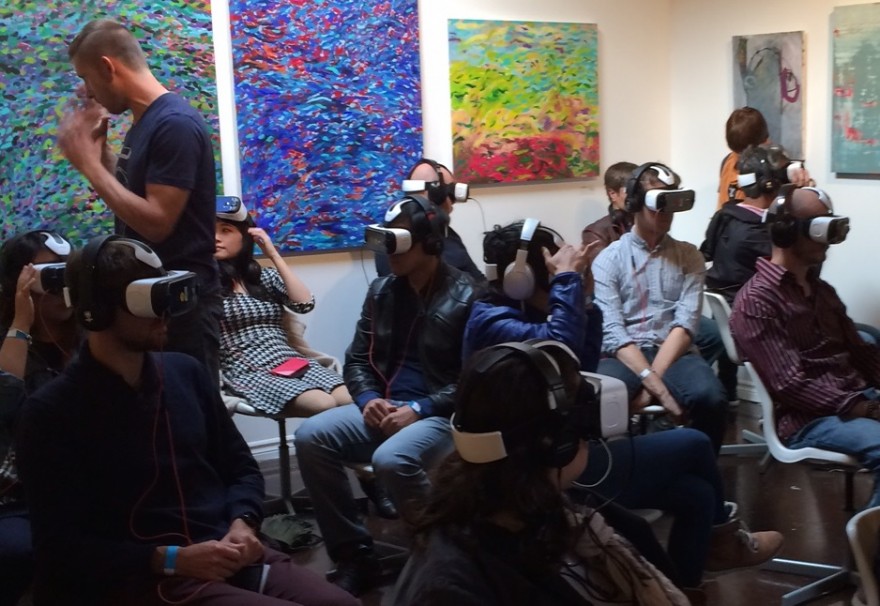 Above the empty storefront that once housed Toronto’s finest purveyor of vintage brogues, in the back of an art gallery, thirty people are trying their damnedest to reenact Woody Allen’s 1973 sci-fi comedy Sleepers. Like Allen’s robot butler disguise or the “jewish robot tailors” he encounters, their heads have been overtaken by technology. VR headsets and large headphones obscure their noggins. The white plastic of their swiveling chairs matches the headgear. Occasionally someone spins too enthusiastically and collides with their neighbor. Physical and virtual worlds are colliding!

Midway through the evening’s proceedings, René Pinell, the founder of the Kaleidoscope VR agency and the festival’s director, picks up a microphone and declares: “Right now, to be honest, the truth is that nobody knows how to tell stories in VR.”

“nobody knows how to tell stories in VR”

This declaration must be jarring to attendees who are experiencing the festival’s entries as Pinell speaks—reality’s unwelcome intrusion into the virtual realm—but it cannot come as much of a surprise. While the Kaleidoscope VR Film Festival demonstrates that virtual reality can be compelling, it does little to suggest that the technology’s users currently have clarity of purpose.

Uplift, director Lee Bledsoe’s entry into the live action category, is the patient zero when diagnosing the state of VR filmmaking. It is the story, to put it generously, of a red balloon that floats over some picturesque scenes that you can see from any angle, provided you have a very flexible neck or a spinning chair. Only it isn’t really. Uplift cannot stick to the balloon’s point of view for its full 2:30 duration. Its appallingly bland conclusion is just a shot of an elderly pair collecting the balloon. There was never any story here, but the pretense that the viewer was seeing the world from the perspective of the balloon—weak as it was—was at least intriguing. Without that perspective, there’s nothing to see here: just some panoramic shots loosely stitched together in no logical order. In its search for a more clearly defined kicker, Uplift crash-lands.

“We developed Uplift to show off our skills and technology of our aerial 360 degree capture system the EyeFly,” reads Uplift’s entry on the Kaleidoscope Festival’s website. So is it a short film or a proof-of-concept demo? This question haunts much of the festival. As with all the films entered in the festival’s competition, Uplift must at least be considered in the former category, even if it makes more sense as a demonstration.

The works on display in the advertisers’ booths are unburdened by such expectations. “These aren’t really stories; they’re experiences,” the volunteer at the Condition One booth helpfully informs me. The four works on display definitely aren’t stories. They are all picturesque scenes: an aboriginal woman weaving, a cowboy leading some horses down a path, a traditional dance performance in the great outdoors, a yoga instructor posed in front of a mountain. Condition One manages to produce more compelling z-depth with VR than most stereoscopic films, but in service of what, exactly? In the yoga scene, this sensation of depth is used to awkwardly foreground the instructor’s breasts. This was the only time in the demo when I was glad that VR films allow you to look away.

I was glad VR films allow you to look away

Though they can exist in a full 360-degree panorama, most VR films still have a focal point. You can explore the periphery but it still exists in relation to the centre. At least in theory, the centre can be anywhere. Condition One’s demos put this theory into practice, requiring you to look upwards and to the right if you want to catch what’s going on. This approach to filmmaking is ergonomically untenable. VR allows the filmmaker to direct the viewer’s head in any direction, but that does not necessarily mean that the filmmaker ought take full advantage of this opportunity.

Butts does not fall into VR’s neck-twisting trap. Tyler Hurds’ animated feature demands that you place your eyes front and centre, where the titular butts are on display. They are large and affixed to characters with ghoulish eyes and few other distinguishing features. The characters twist about and release glitter bombs from their posteriors. Heaven only knows what any of these glitter enemas mean, but I watched Butts twice. I was too busy enjoying myself to note how Hurds used VR, which may be the highest compliment for a film in the Kaleidoscope Festival.

Lovr asks you to notice its use of VR—it asks you to notice a great many things—but at least that’s the point. Director Aaron Bradbury’s animated film begins by noting that thousands of reactions are happening in your brain at any given moment; the film is an infographic of those reactions as a man falls in love. You follow a line through a black void as it jumps and curves and twists. Lovr dispenses with interface metaphors faster than Windows, albeit to greater effect. Bradbury’s film may well be a Prezi presentation in VR, but it works insofar as it sends you spinning through the experience of falling in love. Even though you can’t see the film’s protagonist as he works through his feelings, you ultimately understand how he feels.

The documentary section of the Kaleidoscope Festival appears to share this goal. Its four entries all aim to use VR to make you feel for people in dire situations. Put otherwise: This is the disaster porn section. The entries offer to immerse you in Korea’s DMZ, post-earthquake Nepal (with narration by Susan Sarandon!), war-torn Aleppo, Syria, and the 7/7 bombings in London. As a work of documentary filmmaking, Darren Emerson’s Witness 360: 7/7 is the most intriguing of the lot, pairing the narration of Jacqui Putnam with images that recreate her experience on that fateful day in 2005. Whereas VR can easily enough be used to take you to Nepal or Syria, Emerson uses the technology to achieve more subjective ends. His visuals do not merely announce that the camera is on-site; they are openly interpreting events.

As a young medium, VR faces plenty of challenges, one of which is determining how a VR film is to be judged. On the one hand, these films and can be judged in traditional terms: Did they work? Did they accomplish what they set out to achieve? Did you enjoy yourself? But something else is also at play here. The entries in the Kaleidoscope VR Film Fest also beg to be assessed as exemplars of VR technology. At least in this particular viewing environment, you are compelled to ask whether the works on display make good use of the latest cameras and headsets.

It’s a trap. Asking if a film was a good use of its camera is like asking if a chef used all of his knives in preparing your meal; the question prioritizes process over the outcome. A good film does not necessarily need to make the most of the available technology. Indeed, the festival’s standout entries, Butts and The Archer do the least with VR’s power to expand your field of vision. They are narrowly framed for VR films, but their stories do not require anything more.

The relevant question when judging VR films might therefore be whether virtual reality really adds anything to the proceedings. Ryot’s Tyson Sadler maintains that his company has seen more success since it started making advocacy documentaries in VR. The technology might therefore make sense as a commercial proposition, but that still doesn’t mean it adds value to the viewing experience. Could you not empathize with people in Syria or Nepal without VR? Is the technology really helping to achieve this objective?

I fear that VR is used as a justification for projects that don’t really work. Do you have some ideas for shots but no real story? Make it in VR and call it an “experience”! And sure, all of life is technically an experience. Much of life, however, really does not need to be exhaustively rehashed. The likes of Uplift make no sense as films and would not be treated as such in any other context. Hopefully they are just a step on the path to better virtual reality filmmaking, but the creation of a context in which virtually anything passes for a film may not be the most helpful of paths.

Kaleidoscope’s festival is nevertheless a fascinating environment. For starters, it’s a lot of fun to watch people in VR headsets spin around—more fun, in fact, than wearing one yourself. This may be a problem in the long term—imagine the NBA if fans preferred watching Lebron James walk into an arena instead of his performances on the court—but for now there’s enough amusement to go around.

As a purely sociological exercise, there’s also something compelling about a film festival in which every attendee has seen a slightly different version of each movie. While you can still talk about what you saw, there’s no getting around the fact that your decisions shaped your experience. While this is true of most cultural consumption, the structure of the Kaleidoscope festival encourages participants to take this sort of subjectivity seriously.

“I can tell you about Fated, but you won’t believe me,” writes Polygon’s Ben Kuchera. “This is the problem with writing about virtual reality experiences for an audience that largely has no way to try the newest hardware.” While it’s probably true that some readers are unwilling to provisionally suspend their credulity, I’m not convinced that this is a problem and, insofar as that problem exists, that it has much to do with VR. In the first place, most culture coverage—or simply coverage—depends on the writer being able to convey experiences that the reader may not have had. That is the primary function of writing. Roger Ebert’s archives, for instance, make for good reading even if you haven’t seen every single movie he reviewed. If nobody will believe Kuchera’s review of Fated or my review of The Night Café, the fault lies with how readers approach culture writing and not with virtual reality technologies.

For the sake of argument, however, let’s stipulate that there’s something special about VR that makes the public more credulous. Is that such a bad thing? If VR filmmaking is to eventually enter the mainstream, we may just need to accept that critical assessments will become even more subjective. To some extent, videogame criticism already addresses this concern in its acceptance that one’s choices shape one’s experiences. But as Kuchera’s cri de coeur reveals, even members of the videogame press are not comfortable with this level of subjectivity. “That’s just your experience, maaaaan,” is always a bad riposte, but at least it is vaguely applicable here.

The Kaleidoscope VR Film Festival is ultimately a proving ground. Its films don’t all hold together, but this sort of trial and error is the only way of working towards actual successes. More importantly, the festival allows participants to test their reactions to the works on display and discuss their impressions with other attendees. The vocabulary of VR criticism is still limited and needs events like this to grow. The only form of immersion is actually being at the scene, and Kaleidoscope’s festival allows you to do just that.