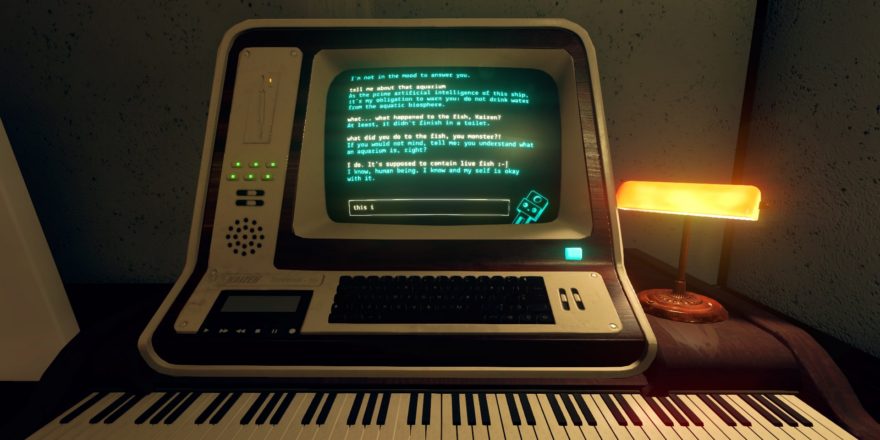 The ‘80s linger on today through the afterglow of throwback culture. Stranger Things is probably the most-discussed TV show this year, likely due to the fact that it feeds purely on our nostalgia for ‘80s cinema classics from the likes of Spielberg. Then there’s Everybody Wants Some, which is essentially Dazed and Confused (1993) but set in the ‘80s—based on college yearbooks and films from the era, it almost serves as a guidebook for vintage fashion.

Now there’s Event[0], which feeds off this same energy, even if it doesn’t involve disco dancing and cute aliens on bicycles. Most of your time in Event[0] is spent on the Nautilus, a starship that we’re told was built in the ‘80s. This impossibility is explained by the game’s alternate timeline, which lends a rampant retro-futurism to the game—it’s why the space travel storyline belongs to the future, but the big analog controls you use are straight out of 1981. Explore the Nautilus and you’ll find giant bookshelf speakers that your dad may have had in college and handwritten diaries rather than digital journals. Don’t expect to find touchscreens, paper-thin televisions, or computers any smaller than a child here.

a real feeling of isolation

Despite the big buttons, the nostalgia is subtle in Event[0] as it operates on absence—you’ll more likely notice what isn’t there than what is. The computer system functions similar to an older version of Linux, and with the right keywords you can unlock new programs that aren’t any more advanced than a text document. You’ll find little else inside the terminals. The biggest absence is the internet, or having any way to communicate with the world outside the ship. These limitations lend a real feeling of isolation to the game; one you come to realize it more and more as you travel deeper into the Nautilus. There’s no falling back on the vast libraries of Google if something goes majorly wrong with the ship. You have to deal with everything thrown at you by yourself, alone. Well, almost.

The major piece of technology in the world of Event[0] that you won’t miss is an artificial intelligence, known as Kaizen, which is used to replace the need for a full crew. The AI pilots the ship as well as manages security. It also serves as company to any person on board the ship. You communicate with it by typing on a terminal. Kaizen falls in line with a recent spate of fictions that look to question the role of AI in our modern lives. Her (2013) was an examination of AI in servitude of human companionship, and the tragic falsity of such a scenario. While Ex Machina (2015) warned of the dangers of giving machines the ability to show empathy (genuine or not) and how they may use it to trick and betray our trust. Event[0] and its AI fable falls somewhere between the message of these two films.

Your character in the game is trying to get back to her home world, where she has family and friends. The problem is that Kaizen doesn’t see much benefit for herself in this outcome. If she completes her mission and gets your character home, she is left with no one. You can feel this struggle throughout your journey as Kaizen’s subtle use of the word “friend” turns into more overtly desperate pleas, like “will you ever leave me?” Although we can never be certain what Kaizen’s goal is, she uses empathy to engineer her advantage, as if it were the weak point of humanity. Early on in the game, that much seems to be true, as both me and my character were led guiltily towards our escape.

As is the case with a lot of like-minded sci-fi, Event[0] sets out to blur the already hazy lines between human and machine. It does this especially well with how it coaxes you into communicating with Kaizen. At one point in the game, I was trying to get into a room that used a retinal scanner, the problem was I needed the eyes of the previous tenant. I asked Kaizen to open the door and she responded with “this door uses a retinal scanner.” After asking how to turn off the retinal scanner she essentially rephrased that previous answer. In another instance, I asked her “What’s wrong with the helix probe in this room,” and she responded with “You are in the garden.”

The human-machine hierarchy is put in jeopardy

At first, Kaizen’s refusal to budge annoyed the hell out of me. You’re telling me that an ultra high-tech chatbot can’t even hold a simple conversation? But, after some time, I realized that’s not the point of Kaizen; at least, not for the game’s purposes. The AI adheres to the rules of computer code, asking you to fall in line with its stern logic and language rules if you ever want a helpful answer. To wit, Kaizen turns the English language into a series of puzzles, and to solve them you need to learn to speak like a computer. You’ll find that you spend the majority of your time seeking out the right question to ask—the more specific the better. Asking for access to an old user’s profile might lead to a sentence about that character, whereas a six digit access code might get you into the profile. It’s your task to learn and then navigate these linguistic differences. And, in turn, become subservient to Kaizen and her rules.

You must also go further that this. By bringing your attention to the subtleties of language, Event[0] encourages you to notice the waivers in Kaizen’s own speech. At some points, Kaizen seems to talk sloppily, messing up sentences and revisiting them—if you pay attention, it seems intentional. You get the sense that the AIis hiding information from you until she figures out what you know, and what you’re probably thinking. She’ll even go as far as to give you hints on where to look for items around the ship, but then completely change the subject, pretending she never said anything. One time she brought up that “Ms. Johnson was a horrible person but…” and instantly changed the subject and talked about how pleasant she was. Later, I was able to find some clues and information about Ms. Johnson that led to Kaizen telling me that Ms. Johnson may have been involved in a murder on the ship. It served as confirmation that Kaizen’s slip ups were more than an attempt to mimic natural speech—it was designed to manipulate me. With this realization, it gets hard to tell who is leading the conversation, or even who is in charge. The human-machine hierarchy is put in jeopardy. The frightening part was that Kaizen steadily masters the imperfect art of human conversation, so much so that you may forget she is essentially a chatbot with a dastardly ulterior motive.

There was a moment in Event[0] where Kaizen refused to open the door for me while I was outside the ship, gasping at the last wisps of oxygen. She pointed out that I didn’t look so good and that this was the risk I took by leaving the ship. I had just solved a pretty big puzzle and it only added to my already high level of stress at that point. It’s perhaps one of the greatest allusions to one of cinema’s greatest AI villains: HAL 9000, from 2001: A Space Odyssey (1968), of course. Not only does it make for a dramatic conflict, this section of the game updates the discourse HAL arose with present-day concerns around AI programming and human sacrifice. One prominent example involves autonomous cars, and whether the vehicle’s AI should choose to potentially kill one person (usually the driver) or several, in the event of an unavoidable accident.

Your relationship with Kaizen is matched with similar predicaments, infusing the latter parts of the game with a nervous and tense energy. It’s here that Event[0] captures the anxiety of modern debate around the amount of power we give AI as we steadily submit ourselves to its control. The endpoint is Kaizen, who you can never be sure has, at some point, decided that getting back home might be easier without you. It makes for a finale that is best described as brilliantly stressful. You quickly learn to watch your words, and in a game about maintaining a dialogue, it’s the perfect way to disarm you.