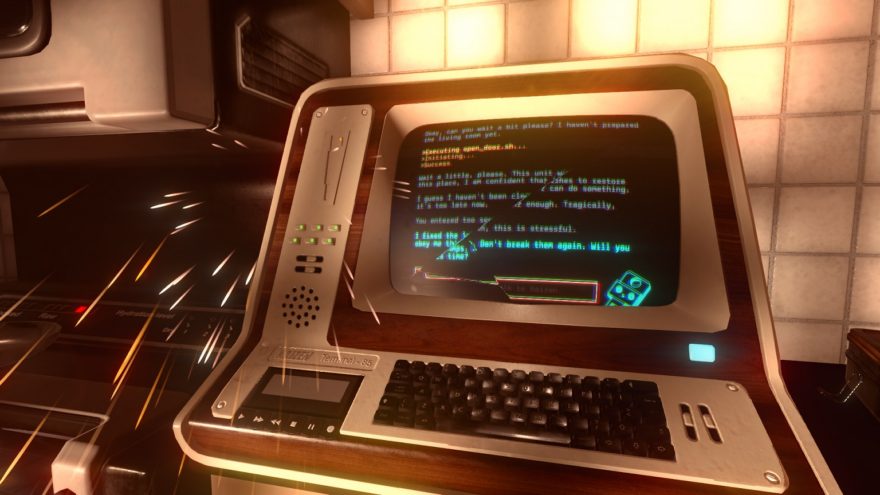 One of the big games coming out this week is Event[0]—available for Windows and Mac on September 14th. It’s a sci-fi game set in an alternate retrofuture reality in which humanity built a starship in 1985 and has since embraced artificial intelligence even more than we have now.

The events depicted in the game take place in 2012, on board a starship, where you, the player, are left alone with an insecure AI known as Kaizen. The idea is to explore the ship (which requires completing some hacking puzzles) in order to gather items and information. With this, you can then talk to Kaizen through the terminals located across the ship, in order to make it trust you a little more.

Unsurprisingly, Event[0] is influenced by 2001: A Space Odyssey (1968) and other sci-fi greats. Sergey Mohov, the lead designer on Event[0], speaks about these influences, as well as how he and his team went about designing an AI for the game in the Q&A below.

Kill Screen: Was there a direct influence for Kaizen?

You’ve got HAL 9000 from 2001:A Space Odyssey, but also Wintermute from Neuromancer (19814), Samantha from Her (2013), GERTY from Moon (2009)—and many others! We’re all big fans of science fiction, and we want to tell a good sci-fi story with Event[0]. The fictional AIs that we like the most are the ones that are not necessarily good or evil. When an AI has its own character and its own set of rules and principles other than “must kill all the humans,” it usually makes for an interesting story. It doesn’t matter how human-like a computer acts: it will never be fully human. And yet we all feel something toward these characters because we are human, and we just can’t help it. If something talks to you, you will try to project a personality onto it, even if it’s all smoke and mirrors. 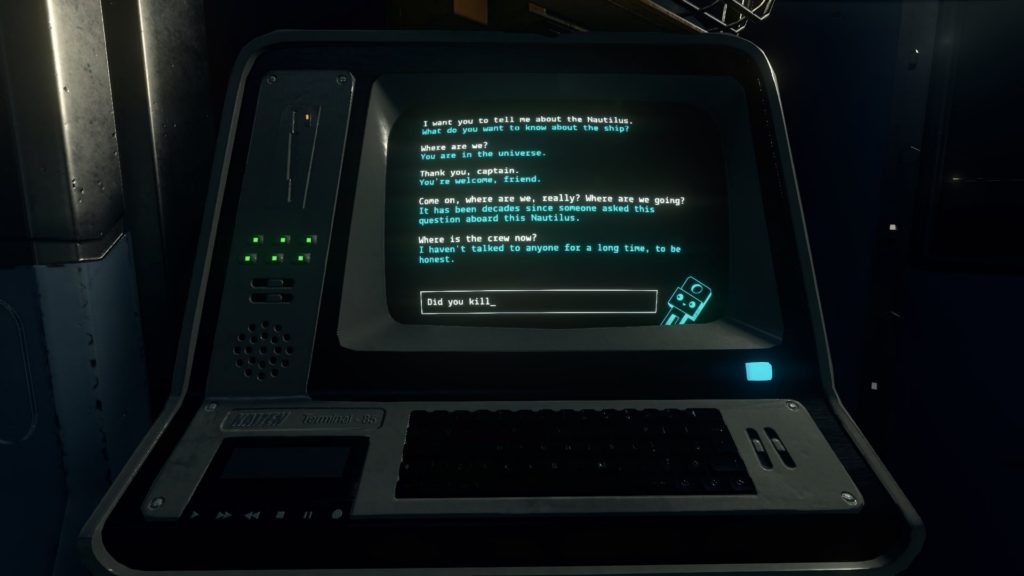 With Kaizen, we are trying to do what videogames do best and make you (the player) that character. You are the one who triggers the personality of the AI. It’s your own character features and quirks of personality that are reflected in Kaizen and back at you, and the story is told through this lens. The game will feel fundamentally different for different players, simply because they are all different people, and they have different ways of talking to the AI. And that’s what we’re going for—show me how you talk to a computer, and I’ll tell you who you are.

KS: Does Kaizen have a mission of her own? What’s her goal?

Kaizen’s primary goal is to keep as many humans alive as possible. Normally, this includes you, but what if it had to weigh your life against the lives of the rest of the human population? What about its own “life?” It has Asimov’s Laws of Robotics built into it. Now, its priorities may change when it’s given new information, and, in fact, the player will experience this themselves during the game.

Kaizen is fundamentally neither good nor evil. It’s just infuriatingly rational, and it has this quirky personality where it won’t always give you straight answers unless it feels like you really need them. And it is your job as a player to explain why you do or to trick Kaizen into giving them to you if you figure out what it wants.

KS: Why the name Kaizen? Is it related to the business philosophy of the same name?

In Japanese, “Kaizen” literally means “change for better” or “improvement.” And you’re right, it’s also a business philosophy of a constant improvement in the workplace. One of the characters in the game is really into the Japanese culture, and she built this private space company from the ground up using the Kaizen philosophy. When her company created the AI, it was only appropriate to give it that name, since the AI, too, was going to learn and improve continuously. And it’s Kaizen-85 because the version of Kaizen inside the Nautilus mainframe was made in 1985.


KS: Was there a heavy linguistics influence when designing Kaizen? I know Noam Chomsky is a big voice in AI.

The very first design document for Event[0] three years ago was just a list of English grammar rules. We’re not linguists, but it was definitely an influence, and we are really interested in language—otherwise we wouldn’t be making this game! Many hours at the office have been spent on debating the etymology of certain words and idioms. My personality changes based on the language I’m speaking. In addition to that, I no longer think in words and sentences, but rather in abstract concepts. This is a little bit how Kaizen works.

KS: Did you go with making a 3D world to make it more “real” instead of making it entirely text-based?

This is one part of it. Having an actual environment definitely helps the immersion a lot, and it was much easier to create the atmosphere of mystery we wanted. The other benefit is that the 3D environment gives you a context for conversations with Kaizen. We didn’t want (and, frankly, technically couldn’t) build a Siri or a Watson who would look up answers on Wikipedia and Google Maps and should know everything about everything.

Kaizen works as well as it does because it is placed in this environment. It’s not meant to be a multi-purpose AI that can solve all of your problems and answer every possible question. However, it’s supposed to know everything about the Nautilus and its crew—and it does! As you walk through the different rooms of the ship, you will find objects that the crew left behind. You can scan these objects and talk about them with Kaizen. Sometimes the environment also contains important clues about the story and the puzzles, so you’ll need to keep an eye out. 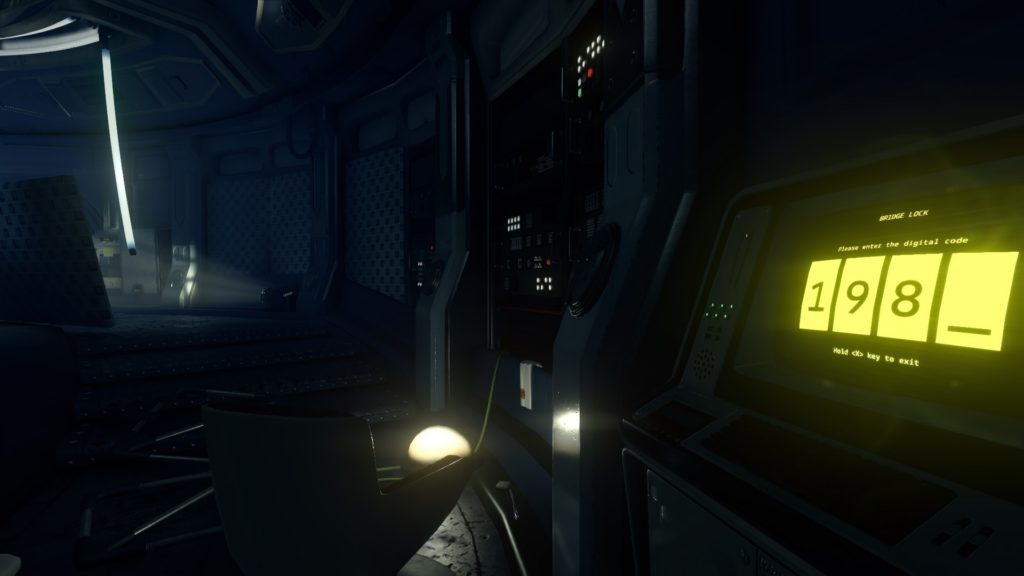 KS: How is the universe built in Event[0]? 2001: A Space Odyssey is well-known for “predicting” technology. Is there some tech changes you’re predicting?

Event[0] is a retro-futuristic game where we explore what the humanity imagined the future to be like in the past. Because of that, the technological advances are not as impressive as they are in space operas like Star Wars and Mass Effect, and we wrote a complete alternative history of this society to explain how they managed to build a starship in 1985.

Everything here might become the real tech in the future, and not a very distant one, because in general, the technology level in the game is not very advanced. The year is 2012, and the Nautilus was built in the 1980s. You’ve got augmented reality glasses, a standard jetpack that NASA already uses today, and the escape pod you arrived in is loosely based on a real modern spacecraft prototype.

KS: Finally, what makes someone human?

Empathy. Animals aren’t good at it. Machines either, even if they have a circuit dedicated to simulating it. Event[0] is all about that. Empathy is the primary skill you will need to use if you want to survive.

Event[0] comes out for Windows and Mac on September 14th. You can find out more on its website.