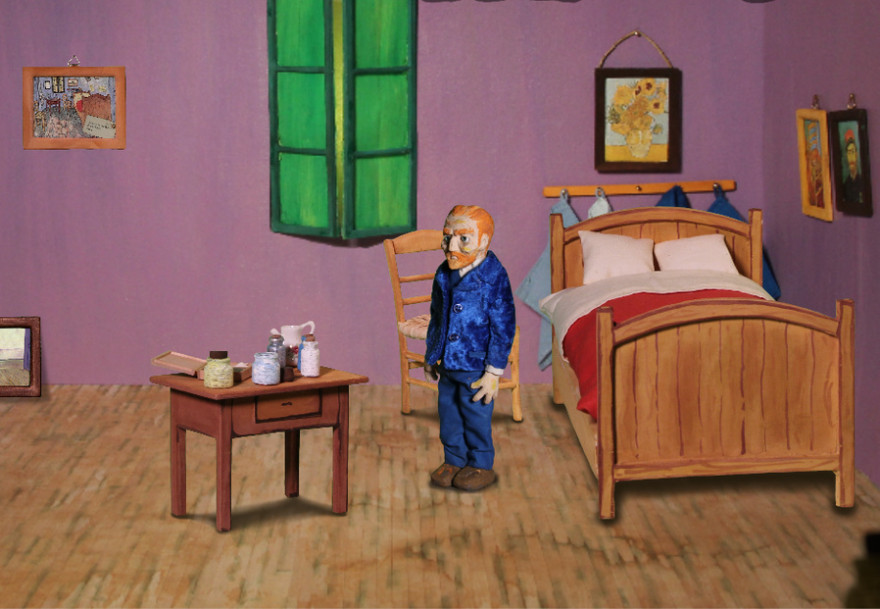 For her Master Thesis at the IT , Federica Orlati has spent the past nine months meticulously crafting Ever Yours, Vincent. It’s a point-and-click adventure based on the letters that Vincent van Gogh sent to his younger brother Theo while living in , . In the game, this happens after he has been committed to a hospital for his psychosis.

While that project outline may not seem too taxing, consider that Orlati has restricted herself to using only analog creative methods: claymation, pencil sketches, doll-sized velvet jackets, and hand-drawn storyboards.

She has made Van Gogh out of putty, with deep tired wrinkles bored into the pale skin under his eyes, and his walk being a crude stitching of wonkily animated marches. It’s a rough impression of the artist, fitting really, given that his lasting reputation stems upon his blotchy impressionist paintings, preferring the expression of vivid brushstrokes over finer, more accurate details.

For the bedroom, she had to cut holes into the walls for windows and doors, create framed miniatures of Van Gogh’s most famous works, and iron tiny coats to flatten them stiff to give the impression that they’re hanging from their hooks. The contents of the bedroom are all faithfully taken from Van Gogh’s own painting of his environment in “Bedroom in Arles,” including the two wooden chairs, the bed in the corner, and the small desk and drawer from which he painted.

In the demo that Orlati has released, you hunt across this adorable bedroom for the letters that Van Gogh has written to his brother. They’re scribed in pen and paper, and kept inside a letter box (the game’s inventory icon) once you’ve found them, which is actually an old German cigar box that Orlati found inside her boyfriend’s dusty attic, which she photographed, and then digitally transferred into the game. These letters offer insight into the artist’s struggle with his vicissitudes in that present situation. He feels imprisoned inside this room of his, which serves only to stir his perturbed mind, so it seems. And so the narrative takes us, with the fiddly frog-steps of claymation Van Gogh, inside his paintings to restore them as they have been made ill by his cracked memory.

Orlati has given it her own electricity

These screen-sized paintings that we step into mark the single occasion that Orlati broke her analog-only rule. To her credit, she did try to recreate them analogically, but it didn’t work out. “Recreating the same colors, same brush strokes and all the other things is almost impossible and very time-consuming,” she reasoned. Instead, she spent hours using the clone stamp in Photoshop to patch together Van Gogh’s originals into slightly disjointed facsimiles that she could then subtract and add painterly features to as required.

Having hand-crafted and finger-pressed everything inside the game, Orlati has given it her own electricity, patching it together from various textures and materials, just as Dr. Frankenstein grafted his monster from assorted flesh and organs. It’s a confident work with no visible signs of slip-ups or struggle, although if you look over Orlati’s notes there have certainly been a few. But she is resilient: “if there is something Italians know well, it is the art of getting by. Our country gives us nothing and we learn how to take the best out of nothing. I’m doing videogame design with paper and wood. So, yes, almost everything is possible,” Orlati once wrote after a tough time.

What she has put together so far is a demo, and not the fully realized scope of her ambitious project. It ends quite abruptly due to being cut short, but then, so was Van Gogh’s life, with a self-inflicted gunshot to the chest, at just 37 years of age.

You can download Ever Yours, Vincent for free on Game Jolt.