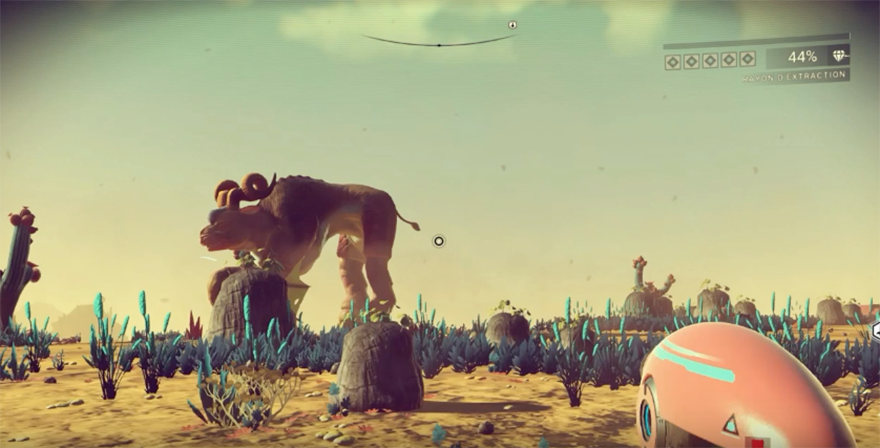 You drift slowly into the unnamed planet’s atmosphere, eager to set your spacecraft down and explore the endless possibilities put forward by the procedurally generated landscape. The ship begins to shake gently as you make your descent, the view outside reduced to a motion blur of saturated colors as the stars and sky blend seamlessly together. After breaking through the clouds and surveying the area, you pick a safe patch of ground to steer your ship toward. Perhaps this planet is full of water or giant rock formations. Is the fauna abundant here, or nonexistent?

The ship has landed safely—it’s time to leave the cockpit and explore. As you jump down and take in the breathtaking scenery you notice a four-legged creature staring at you. It has a goofy-looking face and the snout of an anteater. There looks to be a fin-like structure on its back, the legs are short and thick, with a few spikes sticking out from its head. This is the most beautiful dog you’ve ever seen.

Procedurally generated planets also mean randomized creatures. Because No Man’s Sky has so many galaxies to explore, it’s unlikely you’ll discover the same creature twice. But what exactly are these animals, then? Some of them look relatively normal, while others look like a Spore (2008) session gone horrifically wrong. I’d like to propose an idea: every single creature you meet in the expansive, diverse galaxies of No Man’s Sky is a dog. Each and every one of them. Does it have tentacles for a face? That’s a dog. Does it have hooves? Is it bright green with a tail twice the size of its body? What you’ve just described there is a dog. In No Man’s Sky, dog is still man’s best friend. And they’re literally everywhere.

Let’s go through the criteria that determine the makeup of a dog:

B. Is not a snake

With that in mind, let’s go into a little more detail. Almost every creature in the game seems to share the common trait of having four legs. That’s a good start, but not all dogs have four legs and so we don’t want to exclude them. But is the dog a good boy? That can easily be determined by interacting with the doggo. If it’s shy and cautious, it’s a good boy. It’s a dog. If it’s hostile and actively trying to kill you, it’s aggressive. Guess what? It’s still a good boy, because it’s protecting itself and you’re proud of it for doing a good job at ripping you to shreds. It’s a dog. Let’s say you come across a dog with two legs. Wow! Truly a marvel, and definitely a good boy. What if it has wings? What if its legs resemble a crustacean? Spoiler alert: it’s a dog. Are pups not allowed to have wings or strange crab legs?

No Man’s Sky emphasizes the feeling of loneliness when exploring the vastness of space or scrounging around for resources. But, luckily, you’re never truly alone because you can just look down and see man’s best friend by your side, all turtle shell and bright yellow scales.