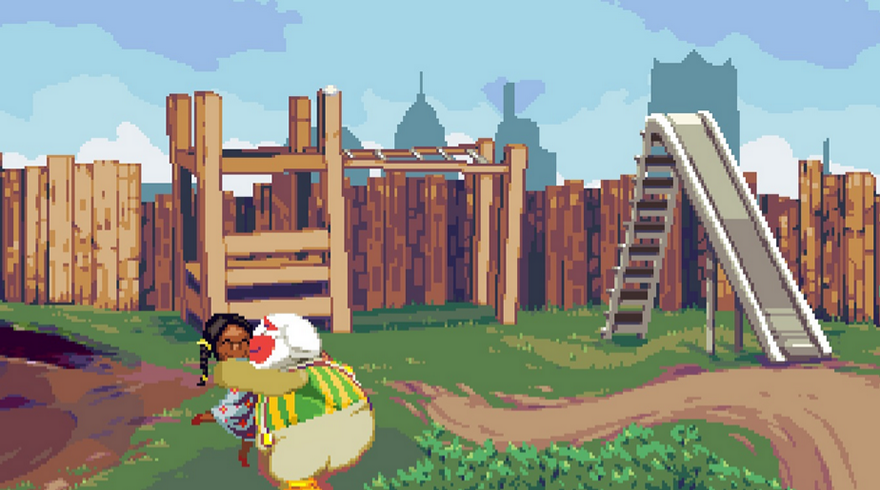 My brother quickly aired his disgust the moment he entered the room. “Yikes,” he spewed, “you look gross.” And he isn’t wrong. Dropsy, the clown I was playing as, is ghastly. His stained toothy maw looks like Wayne Gacy carved into a pumpkin, and despite his pudgy nub of a head, his features gauntly dimple to make him look both chubby and skeletal. Dropsy is bouncy and boneless like a Teletubby, but his colours are washed out and rotted like a doll in the dump. His eyes are yellow like an animal’s; his butt sags like the Penguin’s in Batman Returns’ sewer finale. Dropsy’s creators have designed us something that’s very easy to revile, but all he wants is a hug.

The people of this nameless town do not like Dropsy; they despise him. Some shriek at the sight of him like a boogeyman. Marked onto his own home and circus tent is graffiti telling him to am-scray. Dropsy is ugly, sure, but the scars go deeper. Years ago, a fire at the circus claimed the lives of many members of the community, tentpoles of the town and people deeply loved all taken by the same horrific flame. Dropsy, to them, is a walking, chortling reminder who happens to look like a rotting egg. In his picaresque adventures, which begins with him visiting his mother’s grave at the cemetery, his key goal is to turn everyone’s frown upside down.

Dropsy was introduced to the world in a Something Awful forum thread, where Jay Tholen dead-dropped Dropsy into an adventure and let the cackling strangers of the message board suggest what came next. If I remember correctly, many howled at Tholen to have Dropsy do horrible things to the dog, but that not really being in his nature, he instead gave his puppy matching makeup.

Clowns are easy targets, partly because of their antiquated, excited appearance, and partly because we’re all very cynical of someone who sought a career in making us happy. This game has ample opportunity to become the evil circus caper our instincts believe it will inevitably become, psychedelic hellfire dream sequences, alien conspiracies and series of dark Mr. Bean-y unfortunate events dab along. But Dropsy is not a clown of the Zeebo variety—his trophy wall is full of hand-drawn renditions of the people he’s managed to hug. Instead of anything from the imagination of Stephen King, the world of Dropsy, a patchwork landscape of desert rock garbage communes, low-key urban streets and cozy forests, set to absurdly apt music, feels more like an overlap of Peanuts, Earthbound and A Confederacy of Dunces.

In most adventure games we have to save the day within the body of a charismatic hero, but Dropsy’s first step is just getting people to stop gasping at his pale sight. In this mission, it is charmingly sincere. You help locals with tasks big and small, help a preacher rediscover her purpose, a fish find a friend, an old widower a lost memento, some needing nothing more than a hug, others’ items annoyingly placed on the opposite side of the map a la Mixed-Up Mother Goose.

When Dropsy’s quest becomes grander, based around a larger conspiracy, some of this charm wears off. As the game becomes more “normal,” Dropsy’s original challenge of endearing himself to those he repulses fades, and the puzzles start seeming a little tedious. So many are based around a difficult to manage day/night cycle, and many others around the talents of collectible animals. But before things escalate, when it’s just the story of a clown without a circus, the sentiment warms you like a hug.