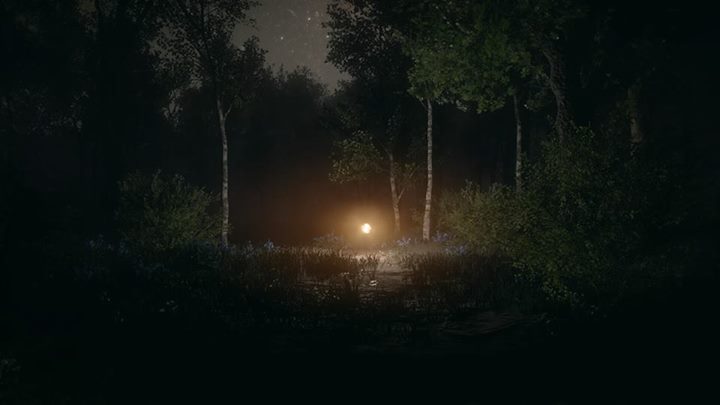 Title:
Everybody's Gone to the Rapture

Sometimes they burn hot, the souls in this game. Sometimes they simmer; sometimes they shoot like hot darts through the mid-summer air. I confess that they might not be souls—perhaps they’re amassed memories, or ghosts—but it’d be semantics puzzling out a different term for the golden arrays of lines which arc and twirl and buzz and are the sole living residents of Yaughton, the abandoned English village you explore in Everybody’s Gone to the Rapture. The little lights have names, like Jeremy and Lizzie and Stephen, and they have stories and they have lives, which we gleam through flashbacks written in this same golden electricity. The light is life, and it is the only thing left.

(The only thing human, anyway. Has any city ever looked so lush, its sky so searingly clear, its swaths of birds and butterflies so studiously employed? There is no scorched earth in this apocalypse, just sighing trees and pollen. You will watch a cloud quietly pass over the landscape and you will look to the grass and wonder if you should head indoors for the afternoon. You will dawdle.)

This is a bit of a spoiler: there is not a lot to do, as the last person alive. “In the light you will find answers,” you hear over a loudspeaker early on, and so, if you’re smart, you follow the light, the glowing globes buzzing throughout the vanished city. If you’re dumb, like I am, you will not pick up on this suggestion, and will stray far from the light, rooting around in every backyard and stray road you can find, walking for minutes at a time through strung-up bedsheets as they waft in the wind, and stumbling into memories for which you will be woefully unprepared. For some reason I thought I’d uncover the secrets of the apocalypse by carefully inspecting each hedge and shed in the county. I spent a lot of time utterly lost in this alien city, much as I might be if actually plopped sans cellphone in the English countryside, gazing over a hill and wondering if I’d need to walk that way or that way, and wearily trudging up to double-check a house only to walk inside and realize it was my first time there. I’d find my way through the golden glow of the home, toward static and a throaty, unearthly hum, and find the memory of an old, grieving man, quietly passing his days.

Which is to say that you will wander, and that, as in life, sometimes just walking places is not exactly exciting. But you’ve never walked like this. Everybody’s Gone to the Rapture treats the act of walking the way a Gran Turismo game treats driving, lavishing attention on the tactility of each footstep, dazzling the player not through the full scope of its visual splendor but through the close- and mid-range minutiae. You walk through Yaughton because you want to stop and read the signs, stare at water pooling on the top of a picnic table, inspect the understated landscaping outside of the church. And anyway, all that walking gives you space to think. The only times you forget to gawp are when you’re lost in your own thoughts anyway, trying to figure out who was where, and when, and why no one’s anywhere anymore.

There is no scorched earth in this apocalypse, just sighing trees and pollen

In the way it allows us to stumble upon the game’s narrative, gradually and varyingly but always, essentially, the same, Everybody’s Gone to the Rapture picks up a conversation the game’s designers began with their first effort, 2008’s Dear Esther. In that game, players walked an identical path from a starting point to the game’s conclusion, with randomized monologue played overtop. The result was a different aesthetic experience for each player, even as the more geographical experience for each player was identical. In Yaughton, too, there is a path you will wander, and you can follow the light from spot to spot, like some sort of waypoint on a map—but never quite so easy as that. The light is a mercurial thing, almost dog-like, and impetuous. I’ve played the game a handful of times in the past week, and, battle-tested, I say: stray from the path, then. You can always find the light later. You’ll find more, or nothing at all, and when you look back the light might be zipping on an errand of its own, somewhere far across the valley. Treat them not as companions or guides but fellowtravelers, people with whom you will, very occasionally, share moments of shell-shocked awe as the game unveils itself.

Designer Dan Pinchbeck has spoken of wanting to reclaim the term “walking simulator,” which was applied with some disparagement to Dear Esther, along with a suite of other games in the past few years that challenged the way videogames tell stories. And, despite its warmth and its subtlety and its almost unbearably English understatedness, you can feel that attempt to reclaim something in Everybody’s Gone to the Rapture. It can be shocking in its resolve, content to let you stand in a field listening to birdsong for minutes at a time, content to leave enormous portions of its mysteries lying unceremoniously in fields and corners. (I suspect that some of the game’s more numerological insinuations will be puzzled over for awhile to come.) Like this year’s Her Story, it’s a game that sometimes plays best with a notepad in front of you, but it’s less interested in tricking you or dazzling you than merely moving you. It succeeds with a certainty that is rare in the medium. That it does this while trafficking in bold sentimentality and caps-lock themes makes it all the more interesting: they’re aiming impossibly high and nailing the mark.

It’s been a few years since the rush of “walking simulators” precipitated by Dear Esther’s creation kickstarted the sometimes-contentious conversation about linearity in game narrative, and, while it’s against this game’s nature to provide any easy answers or conclusions, it feels, decidedly, like a new talking-point, the first inkling of a new wave. It synthesizes the lessons of all its forebears into a tighter, more confident whole. Like Gone Home and Dear Esther, it couches a deeply human tale behind something fantastical and mysterious. But better than either of those games, it delivers on both the astral and the human premises. (Indeed, this may be the case of the most star-crossed lovers ever.) The game seems to pull most directly, though, from the 2013 walking sim Proteus, which paired Ed Key’s pastoral, surreally Anglophilic countryside with a suite of ambient tones by the musician David Kanaga. The result was a pastel world that also worked as an interactive album, a warm work of drone that players participated in the performance of by their very exploration.

all games are ambient albums of a sort

Now: imagine that gauzy pastel universe recreated with the lenses dialed in to capture everything—not druggy euphoria but the microscopic and the telescopic details of a place, all there, with eerie specificity. The music you create by exploring is equally interested in re-assembling hyperreality. You’ve seen images of Yaughton, and after a couple afternoons wandering through it I’ll never forget the feel of the place, but I’ll return to hear it again. Its blend of choirs, birds, ambient drones, radio static, robotic voices, plaintively bowed cellos and magisterial, screaming feedback comprise perhaps the most sophisticated and rewarding audio experience ever found in a game. With Limbo and The Swapper, it suggests that all games are ambient albums of a sort, and that perhaps a digital landscape was always the proper means to experience ambient audio in the first place. An airport was just the closest thing Brian Eno had to a walking simulator back in 1978.

“I believe I am dying,” a doctor concludes, mourning already, over a crackling radio, as strings slowly rise like water in a sinking ship. It is this narrative conceit that Everybody’s Gone to the Rapture shares most clearly with that first wave of walking simulators: We experience the inhabitants of these empty houses, secret rooms, and dreamlike wastelands through memory and voiceover. They’re haunted games. But Yaughton is somehow more suffused with loss, more certain of death, than its forebears; one thinks of the moment in Paul Thomas Anderson’s Magnolia, when a very different sort of apocalypse is occurring, and the camera zeroes in on a phrase: “This is something that happens.” The director has said that movie’s ostentatious climax came to him as his father was dying. In the work “When My Father Died It Was Like a Whole Library Had Burned Down,” the Swedish artist Susanna Hesselberg built a library that plummets down into the darkness of the earth, an obstinately unreal idea made real. Death and loss often feel impossible, and distant, but it is quite the opposite: it is certain and absolute and, cosmologically speaking, coming soon. By letting us know the souls of Yaughton and inhabit their final moments, Everybody’s Gone to the Rapture forces us to consider the certainty of death, both our own and of every single person we know, whether these sadnesses happen piecemeal over decades or all at once, in a grand, cosmic flash. But the game does not find darkness in the apocalypse. It refuses darkness. It finds, instead, pinwheeling butterflies and an immortally blue sky; moments of quiet frustration and tenderness between lovers; a bird-watcher’s chair, pulled up next to a window, with binoculars by it. It finds, despite everything, the light; it dwells there, and asks you to walk in it.