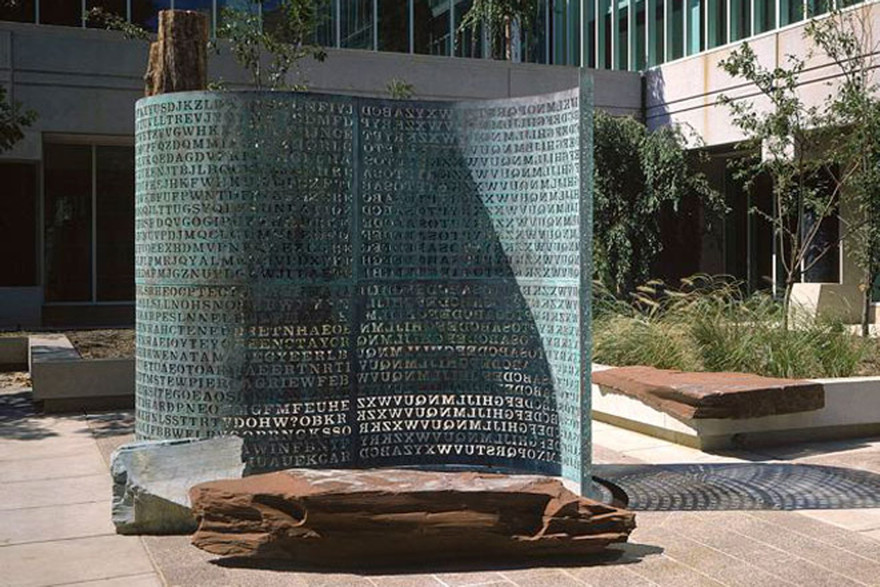 Every day, as they travel to work, members of the workforce play games. Some try to solve sudokus while standing on a train platform. Others tap away at their phones while sitting on buses, desperately trying to make progress on Candy Crush before going on the clock. Then there are CIA employees, who can engage in a little recreational cryptography on their way to work.

In 1990, the CIA installed Kryptos, a sculpture by Jim Sandborn, in the courtyard of their Langley, Va. headquarters. The sculpture’s curving metal sheets are perforated with 865 letters that, when deciphered, form four passages. By 1990, the first three passages had been deciphered. The last remains a mystery.

On Thursday, The New York Times’ John Schwartz reported that Sandborn had released a hint to help codebreakers decipher Kryptos. Four years ago, he announced that five of its characters spelled BERLIN. Now we know that the next five spell CLOCK. The meaning of the fourth passage’s remaining 87 characters remains a mystery.

Cryptography is no game but the act of code breaking is often thought of in those terms.

For the national security apparatus and its critics, cryptography is no game. Yet the act of code breaking is often thought of in those terms. The cracking of the Nazi Enigma code, which is depicted in Morten Tyldum’s aptly named The Imitation Game, has always been associated with a chess game. The British government’s Government Code and Cypher School was dubbed the “Golf Club and Chess Society” during World War II for secrecy purposes. It was a fitting title. Alongside Alan Turing, one of the cryptographers to break the Enigma code was Conel Hugh O’Donel Alexander, a two-time British chess champion who would later be named an International Master of chess.

Games, according to some academic studies, improve mental performance and abstract reasoning skills. The CIA would not smile upon its employees playing solitaire at work but Kryptos is the kind of puzzle game that its employees can benefit from. It tests the sort of skills they need on a job. If only someone could pass that final test already.

H/T New York Times. You can see the final Kryptos passage on their website and take a stab at solving it. Godd luck with that.