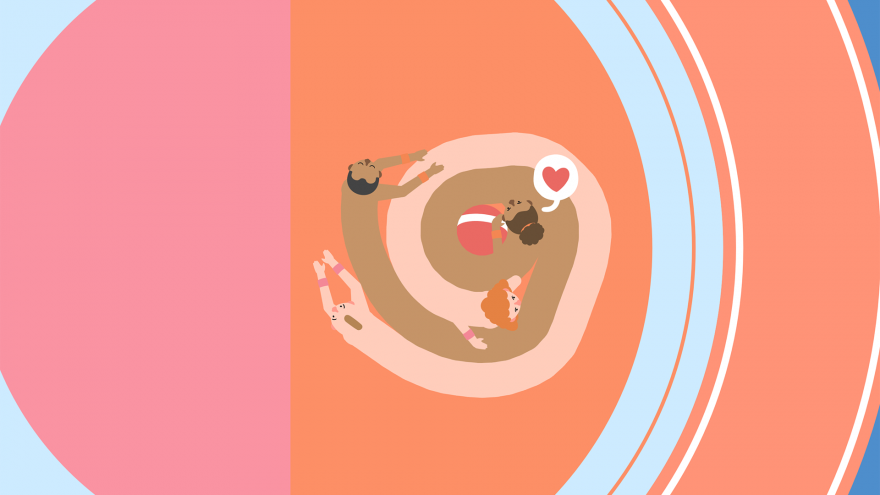 Title:
Push Me Pull You

Sweating, writhing, fleshy worms are locked in combat with each other. Their two heads and four arms struggle to maintain dominance over one another. It’s a vicious and gross game of sport. And yet it is somehow completely, utterly adorable.

Push Me Pull You lands somewhere between sumo wrestling, a soccer match, and the body-horror nightmare of The Human Centipede (2010). It has two teams of two players competing to gain control of the ball on a playfield, each pair working together to wriggle their conjoined bodies cooperatively to score points. The maneuvers available to each player at either end of these crawling torsos include expanding and contracting the length of their man-worm, all in an effort to wrap around and control the ball. Shorter worms crawl faster than longer ones, but have less power to push around the opposing team.

Hosted in an elaborate universe of double-bodied pairs, the game delights in stretching that absurd tweak to reality throughout the entire volume of its world. It’s why characters are seated in double-backed banana chairs; how else do you sit with a person attached to your rear end? The soundtrack by Dan Golding similarly takes what should be athletic fanfare and turns it into a haphazard cacophony of flutes and cowbells, squawking clarinets and a rubber-band marching band tuba bouncing along. It’s messy, but in the end it’s all so delightful you can’t help but grin, even if your innate reaction is to just simply stare at the screen, perplexed, and utter “oh no.” Not many games graciously “thank you for playing [their] videogame” in the credits and then handily provide the names of specific typefaces used—maximum attention is paid to every detail and design.

That ethos extends to the controls, comprised only of one joystick and two buttons for each skittering connected torso. What this means is Push Me Pull You excels as a pick-up-and-play title—it simplifies the idea of sports games in an effortless albeit nauseous way. It’s a far cry from the systems-heavy approach now entrenched in traditional sports games (and their related issues with representation). Yet, Push Me Pull You is still able to elicit wildly contorted faces and the controller-busting frustration as you vie for ball-controlled supremacy. The crucial difference, however, is due to the competition being wrapped in such a friendly and ridiculous exterior, it’s difficult to commit to trash-talking your opponents, mostly due to fits of laughter. The other inhibitor of more hostile reactions to the game is the fact that you must cooperate with your partner to pull off bizarre tactics like “the poke” and “the locomotive,” each of which prove essential for victory.

It’s messy, but in the end it’s all so delightful you can’t help but grin

At the end of the match, you’re treated to illustrations that deflate any sense of championship. Both teams are shown getting rained on: the winners just happened to have remembered their umbrellas, while the losers only have the sports page to help keep them dry. The idea encouraged through these scenes is that, no matter the problem, everybody’s in it together—some find better ways to deal with it, is all. That sense of welcoming is inherent to Push Me Pull You’s DNA, with wormy avatars encompassing a variety of skin tones, genders, and ages. An unobtrusive “colorblind mode” carefully swaps the game’s palette, further demonstrating that the Australia-based team House House are striving to bring everyone into the fun. You don’t even need the requisite closetful of electronic equipment to get a full four-person match going—two players can compete on either side of the same controller, physically and digitally linked together as teammates.

That’s what it’s all about: connectedness. Back in 2013, it seemed like we were bound for a local multiplayer renaissance. Titles like TowerFall (2013), Nidhogg (2014), and Sports Friends (2013) urged us back to the couch to play with our buddies for the first time since the heyday of the N64. Push Me Pull You continues this effort and manages to combine those games’ sense of competition, chaos, and approachability. While our ingrained sense of competition drives all of us to best our opponents, Push Me Pull You reminds us that it doesn’t have to manifest as a testosterone-fueled rampage. It works against the grain of sports games by allowing us all to tap into that primordial urge to win—you don’t need prior sports expertise, physical prowess, or a highly-tactical mind to approach this wormy ballfield. Exemplifying this is Push Me Pull You’s character designs: the hard bodies of sports games are exchanged for soft and stretchy conjoined torsos. 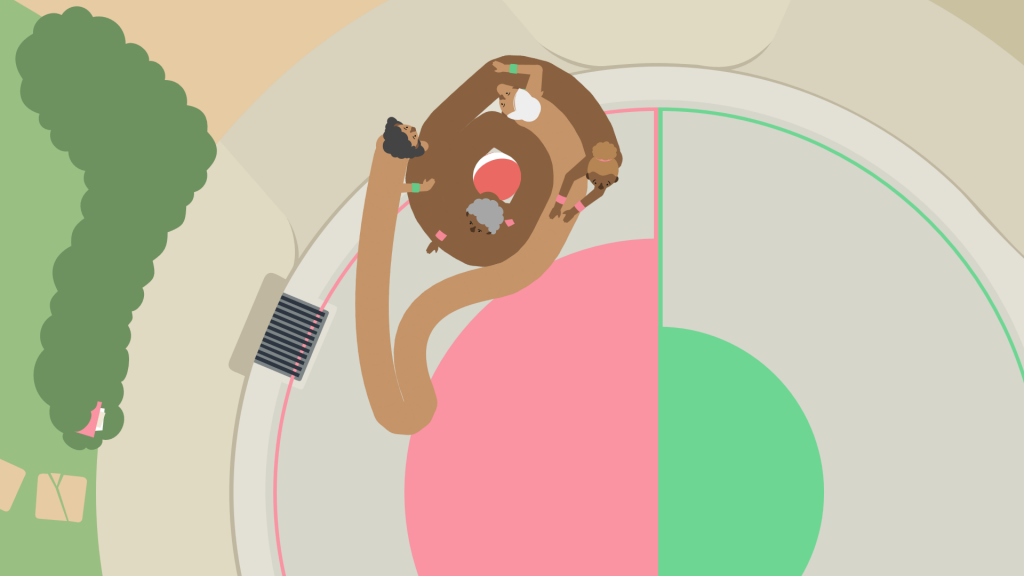 Just as anyone in their 30s cut their teeth on dorm room Goldeneye (1997) and Mario Kart 64 (1996), I can only hope some freshmen right now are figuring out the best way to settle an argument is with some two-on-two worm wrestling. Online multiplayer can connect us to everyone in the world, but local multiplayer games can bring us closer to our best friends (and help us make a few new ones in the process). Push Me Pull You proves that the “new arcade” of previous years is not dead; it’s been developing into something weirder, funnier, and brighter than we’d expected.