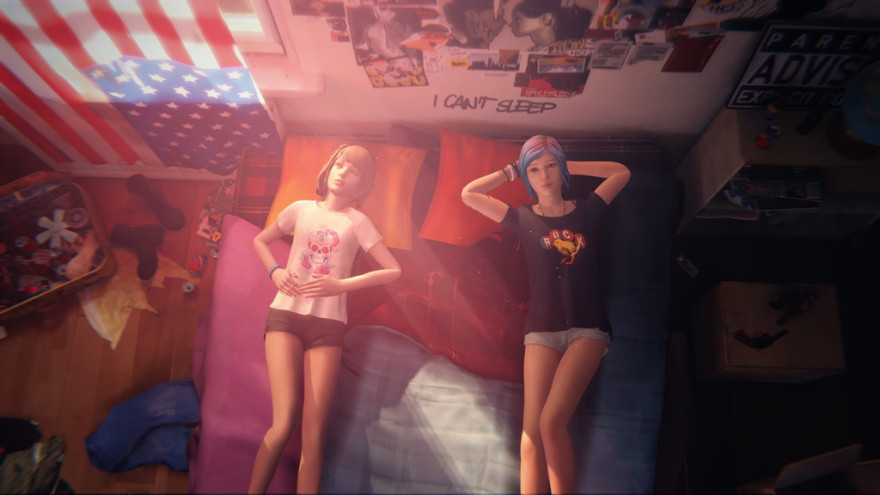 There are two big things going on in Life Is Strange, and they both have to do with butterflies. The first has something to do with the way in which the butterfly icon that pops up each time the player makes a narrative choice invokes the blue butterfly Max improbably photographed in the girls’ bathroom immediately before discovering her powers. It’s related to the sense of quietude that informs many of the game’s better moments, and the insistence that small things, fragile or easily overlooked, are the things that are really important.

This is the part of the game that wants to deal with the way that people are never just one thing, and that relationships are never simple or easy, and reconnecting with an estranged friend is an ongoing process of hot and cold, continually informed by old affection and old pain. It’s this aesthetic impulse that rewards the player for paying attention to the still corners of Max’s world, shaping choices by asking herself what Max can live with rather than what will produce the “best” outcome.

The second impulse driving Life Is Strange is much more concerned with the spectacular, and this results in a game that is less interested in portraying teenage drug use, bullying, and sexual assault than with using them as plot points. This is the part of the game that will trap a character in front of an oncoming train in order to signal that the story is willing to kill, even if not that specific character at that specific instant.

All along, Life Is Strange has struggled to reconcile these two competing impulses, but the third episode, “Chaos Theory,” wants to really start to figure out what a balance between the aesthetic and spectacular would look like.

As the Blackwell community attempts to deal with Kate Marsh’s suicide (or suicide attempt, depending on the playthrough), Max and Chloe set out to try to establish a connection between the video of a drugged Kate at a Vortex Club party and the disappearance of Rachel Amber. This late in the story, it might be a bit bothersome that there’s very little to flesh out the elements of the supposed mystery tying together the Prescott family, Blackwell Academy’s faculty, Rachel Amber, and other murky goings-on in Arcadia Bay. But given the scale of the storytelling to this point, it makes sense that a couple of teenagers poking around in the principal’s office don’t suddenly become master investigators. Amateur detective work gives way to (mostly) good natured mischief, but it soon becomes clear that Max and Chloe are both grieving, and that their pain colors the joy of the friendship that they are working to renew.

And then everything changes.

Of course, “everything changes” is a cliché, but in the context of the first two slow-burning episodes of Life Is Strange, the twist at the end of “Chaos Theory” is nothing less than staggering in its audacity. It may signal the final triumph of spectacle over the aesthetic, the final descent of a game struggling with its own competing impulses into irredeemable melodrama.

And yet, at least for now, I found it incredibly energizing. Rather than reconciling the aesthetic and the spectacular, “Chaos Theory” exploded them. It remains to be seen whether both elements will survive. Right now, anything could happen.

This, of course, is true in the space between chapters in any story. One of the great pleasures of serial narrative is to not know exactly where things are going sentence to sentence, scene to scene, and this is only heightened when the next chapter doesn’t actually exist yet.

The last two chapters of Life Is Strange promise an entirely different world than the one Max and the player have shared to this point. It may be great, or it may be a great disaster. This is the risk of expanding the possible into the wildly improbable.

Which brings me back to butterflies. To this point in Life Is Strange, the butterfly has been the embodiment of the outsize and unpredictable effects small inputs can have in complex systems. Max signs a petition or doesn’t, answers her phone or sends a call to voicemail and things change, but mostly little by little, and only in one direction. Max is the butterfly flapping her wings on one side of the world and causing a hurricane a thousand miles away. This is the butterfly of chaos theory.

small inputs can have unpredictable effects in complex systems

But in “Chaos Theory,” there is a second butterfly in play. In his story “A Sound of Thunder,” Ray Bradbury tells the story of a time travel safari company in which men travel to the past to shoot dinosaurs, but only in the instant before the dinosaurs would have died anyway. The men walk on a levitating path, so as not to touch anything—small inputs can have unpredictable effects in complex systems—but when he comes face to face with a tyrannosaurus, one of the men loses his composure and strays from the path. The men return to a present that is not the same as the one they left, the result of a single butterfly crushed under a frightened man’s boot.

We cannot yet say whether Max, in this allegory, is the butterfly or the boot. We will find out soon enough.