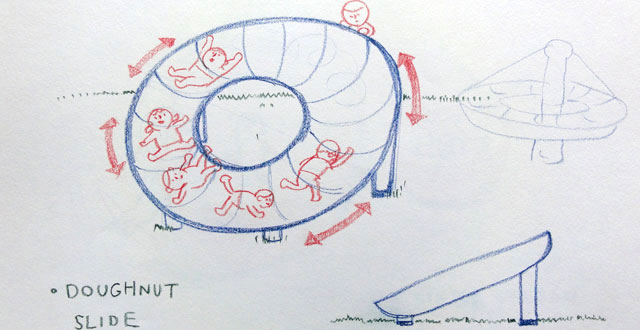 During his short career Keita Takahashi has dreamed up the celebrated PlayStation 2 title Katamari Damacy; left games to design a playground in Nottingham, England; and most recently joined the team responsible for the surreal and absorbing browser-based MMO Glitch. We caught up with Keita as he was settling into his new home in Vancouver and chatted about his approach to creating experiences, the differences between designing games and playgrounds, and an idea for a multi-generational, multi-species play space.

What inspired you to move from game design to playground design?

Before I started making videogames, I studied sculpture. I’ve been in the videogame industry for 11 years now—and just as I started to feel I wanted to produce things in the real world instead of the virtual, I received the offer from Nottingham Park and jumped at the opportunity. Although playing while facing a television screen can be fun, I wanted to come into contact with a simple and direct type of fun experienced by being outside and moving your body. Also, playgrounds are fundamentally a public and free experience, right? I admired its lack of economic discrepancy. There may be inequalities depending on the location, though.

What are some of the overlapping areas between the two fields? What kinds of skills from your game development days have you found particularly useful in playground design?

I haven’t been in the playground industry for a very long time, so I can’t make any generic statements. But in my own personal experience, there wasn’t a big difference [between the two fields]. When making videogames, I’ve tried to develop them in such a way so they may be enjoyed by anyone. Also, I believe that things other than what’s usually considered the game, such as a settings/options screen, can be a part of play. Gameplay isn’t just inside the game; everything is the game. Everything should be part of the fun. With this approach in mind, a playground wasn’t something for children only—I want to make something they can enjoy together with their parents as well. That skill, or rather, attitude, is definitely there.

What kind of skills have you found that you didn’t have, or have had to develop during the process of designing the Nottingham park?

Firstly: English skills. Then, a flexibility and ingenuity as good as a child’s. Aspiring to break away from what already exists is important. Also, the skill to estimate costs.

Who have you had to work with throughout the project? Has it been a solitary endeavor, or have you been partnering with other artists, game designers, landscape architects, or others?

“Gameplay isn’t just inside the game; everything is the game. Everything should be part of the fun.”

Of course, I’m receiving professional advice. Safety is really important, after all, so it’s necessary to collaborate with professionals. I also had the chance to speak with designers from a company producing ready-made playground equipment. I can’t say it was “collaboration,” but meeting successful people from other fields is fun.

Have you encountered any other game designers who are moving into the real-world playground space?

If not, why do you think that is? Do you think this is just an access thing—that the people who can get government contracts to build playgrounds are architects? Or do game designers not really see themselves as operating in the same realm as playground designers?

Probably because [game designers] love videogames. I prefer to make things that are entertaining; not just videogames. That’s why I want to make a playground, and if I’ve got a good idea, of course I want to make games too. I think developers now are too fixated on what’s on the screen. Since your job is to create fun experiences, I think it’s good to expand your horizons. It’s so wasteful not to.

Swing, Slide, Sandbox, or See-Saw—what would you choose?

Describe the last time you played on a playground.

I can’t recall exactly when, but it was probably when I was in early elementary school. I remember playing at a park in my neighborhood.

Describe your favorite playground from when you were a kid.

Rather than playing on a playground, I remember usually hanging out on a road in town drawing or riding my bicycle. Maybe it’s because there weren’t any fun playgrounds in my neighborhood.

Describe your favorite toy when you were a kid. Do you still have it?

I’m not even sure if I liked it or not, but I still have a toy car that was a wooden duck figure with wheels. I have more memories of drawing pictures than of playing with toys.

What do you use for inspiration when designing play spaces?

When I design, I actually move my body and think about ways to move that seem like the most fun. Anyway, it might not answer your question, but it’s things like body movement and embodiment.

Describe a piece of playground equipment that could be used by a 10-year-old, a 30-year-old, and a 60-year-old at the same time.

A playground or facility with floors covered with a million really soft balls about 50 cm to 1 meter in diameter that make different sounds when squished. Additionally, dogs can join in.

Describe your ideal setting for a playground.

I don’t really have an ideal setting, but it should be close to where people live. I don’t like places that require you to drive a car to access.

How would you design a space that incorporates both digital and physical elements?

It might not answer your question, but I think one first has to ask, “Does mixing the digital and physical have any significance for anyone?” It’s not necessary to mix the two meaninglessly. Building a playground space is particularly so. If something physical is fun enough, then it’s fine the way it is. I don’t think there would be much room to add something digital.

Mathias Crawford (@mfcrawford) is a Canadian living in San Francisco, where he designs games for Natron Baxter and is pursuing graduate studies at Stanford. In his spare time he enjoys watching cricket and dreaming up elaborate theories about the mundane.