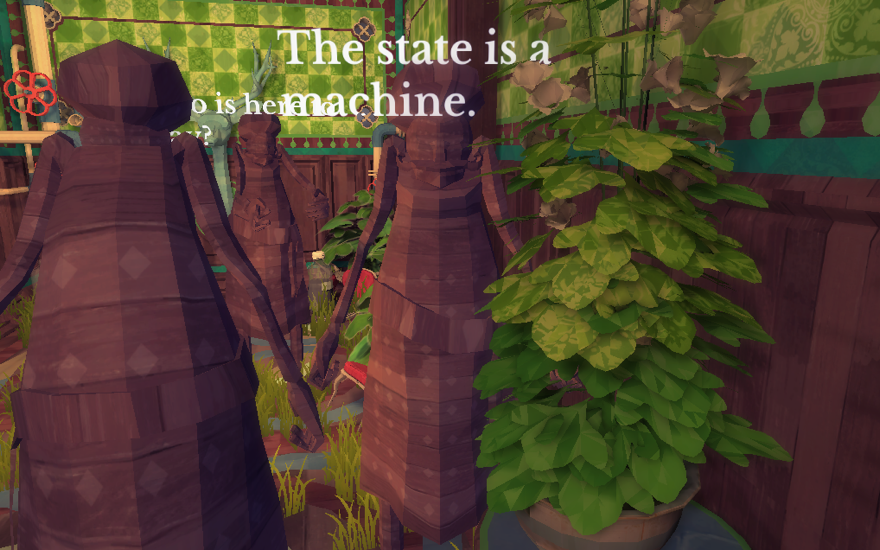 Menagerie is like a networking event from hell: Everyone in the room is spewing nonsense and there’s no way of escaping. Each time you turn your back and try to walk away, your interlocutor spawns a clone: it’s a conversational replicant. Think of Menagerie as LinkedIn’s logic mapped onto physical space.

Before you run away screaming, know that Menagerie is a game and not a networking tool. You should also know that Menagerie’s room, which features overgrown plants, assorted detritus, and a bathtub has no door. Good luck running away.

Maybe you shouldn’t run away. Menagerie, which has its roots in a scripted performance by Prayas Abhinav, Vidisha Saini, and Agat Sharma, is oddly captivating. As one interlocutor becomes two and then eight, the conversation becomes harder to follow. It never really made sense, but now it’s complete gibberish. Curiously, this is what makes Menagerie alluring. A part of you wants to make sense of this dense network of balderdash, even as that task becomes impossible.

The physical reality of Menagerie is not so much appealing as it is inescapable. It’s easy to walk around a room when the only one person-cum-obstacle for your first-person avatar to round. But what do you do when there are 15? It’s hard not to feel walled in. In practice, you are. Under even the most finessed of inputs, your avatar moves haltingly against a wall of human-shaped characters. Menagerie turns the sensation of being trapped in conversation into a quasi-physical reality.

Menagerie, not unlike writer-programmer Paul Ford’s AnxietyBox, is a representation of your (or at least my) fears in an alternate medium. It hems you in, both physically and narratively. It has no end. It’s not exactly fun and it’s not exactly painful, but it may be the exact outlet for angst that you need.