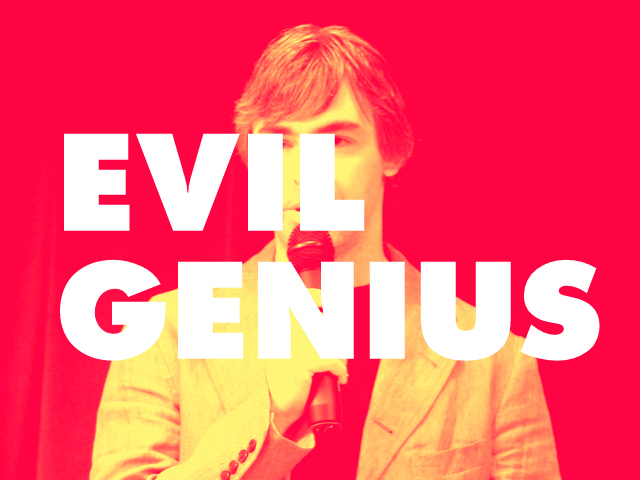 As far as slogans for industry-conquering multinational corporations go, Google’s “Don’t be evil” ranks pretty high on the list. It’s concise, impactful, unselfish. The informal motta may be withering some, with suggestions that sharing users’ private data is within a stone’s throw of evil-ish behavior, but according to a new article by Steven Levy for Wired, this isn’t the phrase that transformed Google from a car garage start-up to a leader in innovation.

CEO and co-founder Larry Page’s operating principle can be summed up thusly: Don’t just be better. Be ten times better.

Levy describes the conventional wisdom that most companies are happy to improve their product incrementally over their competitors. “A 10 percent improvement means that you’re basically doing the same thing as everybody else,” Levy writes. “You probably won’t fail spectacularly, but you are guaranteed not to succeed wildly.”

You can guess where I’m going with this. Look at the game release calendar for the past few years. Or even the next few months. Gears of Wars (2005) was a new leap in gritty realism and play mechanics. Gears of War: Judgement (2013) layers small changes over a pre-existing formula. The New Super Mario Bros. series is regularly taken to task for offering iterative change where previous platformers shook up the rules. The number of numbers in the last few years’ line-up of big games could supply a math class.

In the wake of Junction Point’s dissolution after an unsuccessful sequel with Epic Mickey, Page’s notes should be taken seriously be developers transitioning into an unpredictable market.

“That’s why most companies decay slowly over time. They tend to do approximately what they did before, with a few minor changes. It’s natural for people to want to work on things that they know aren’t going to fail. But incremental improvement is guaranteed to be obsolete over time. Especially in technology, where you know there’s going to be non-incremental change.”

Stepping out onto unstable ground is risky, and large publishers aren’t too keen on spending wads of cash on unproven formulae. So it’s understandable that, late in a generation cycle, they would fall back onto safe bets. But today’s safe bet is tomorrow’s dated has-been. Indie developers are experiencing a rash of success and visibility not only due to the ease and low-cost of entry (everyone has a phone/PC), but also to their willingness to start at zero. Build something new, not newer.

Google became the de facto search engine not because they built something better than what Lycos or Dogpile were doing. (Youngsters: Google ’em.) But because they did it differently than everyone else. “We have a good ability to see what’s possible and not be impeded by the status quo,” Page says. Too often games yield to what’s expected, what’s a guaranteed hit. Of course if this were always true, we’d be playing nothing more than Space Invaders: For Real This Time, or Pac-Person: All-Inclusive Edition. There’s always been a push to break new ground.

But the ground is growing brittle and hard. Soon, a little bit better won’t be enough.