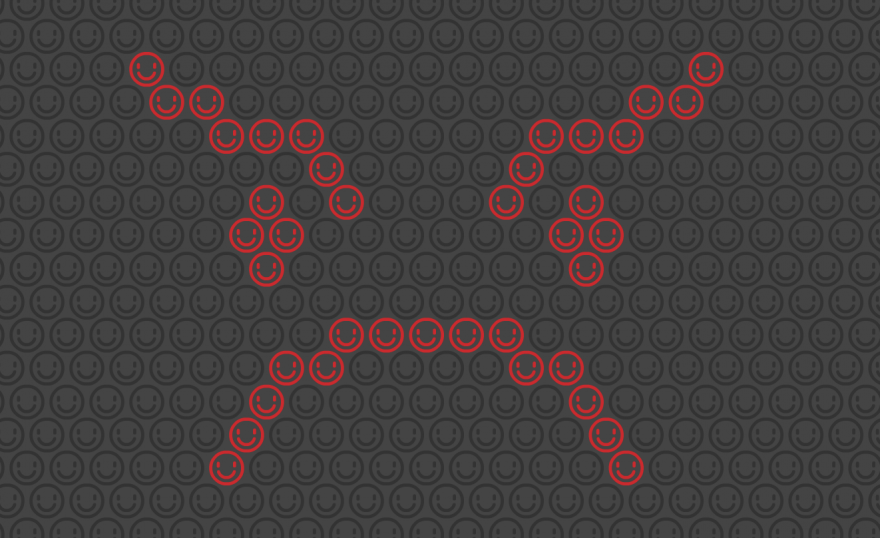 People like to think of being evil as something extraordinary—we tend to think of it as extreme, or even supernatural. However, game designer and programmer Nicky Case, points out that social psychologists have repeatedly found the opposite to be true—people who we consider to be evil, are in fact incredibly ordinary. Case’s obsession with systems, which has come through in their various projects such as, Simulating The World (In Emoji) and Parable of the Polygons, is now helping us better understand the idea of evil.

Case has been exploring the concept of “emergent evil” as part of their first collaboration with PBS Frontline. The basic principal of Case’s thinking around this is that an individual could become evil simply by the collective they are surrounded by. They use the metaphor of water molecules, either being in a frozen or liquid state, pointing out you have the exact same molecules, however, their state varies drastically depending on the larger collective context. What this means is that someone who may be considered normal and moral in a certain instance, could easily become “evil” in another.

This idea of evil as ordinary is not completely new. Hannah Arendt’s 1963 work, Eichmann in Jerusalem, popularized the idea of “the banality of evil”, which was inspired by Arendt’s observations of the trial of Adolf Eichmann, one of the Holocaust’s major organizers. “The banality of evil” proposes that Eichmann was not a result of calculated and ideological evil, but rather someone who was lead by his sense of obligation to a bureaucracy, who valued his position and the chain of command—thoughtlessly disconnected from the full consequences and weight of his actions. However Case’s theory of “emergent evil” expands beyond the limits of Arendt’s bureaucratic evil by looking at collective systems of people more broadly, which doesn’t limit it to the highly organized or clear hierarchical structure of a government.


A big part of how we think about “evil” is that it’s something we tend to think of as a trait other people have, and not something we are ourselves. A recent study on the prevalence of “ethical amnesia” directly tackles this by showing we tend to more easily forget actions we think of as unethical. “Unethical amnesia is driven by the desire to lower one’s distress that comes from acting unethically and to maintain a positive self-image as a moral individual,” the authors write in the paper. Although this study was limited to “ordinary unethical behaviours,” the authors speculate that it may be applicable in more extreme cases as well.

Studies like this make it clear that we’re still working through our questions around morality and evil but more importantly what that means for us, our communities and the world more generally. As Case says, “understanding the idea of’ ’emergent evil’ is the best defense against emergent evil.” Considering the types of  interactive projects Case has made so far, it’ll be interesting to see how this idea inspires a future project, and whether it will be able to quell the fear that any of us has the potential to enact the unthinkable.

Be sure to keep up to date with Nicky Case’s work through their blog and Twitter.