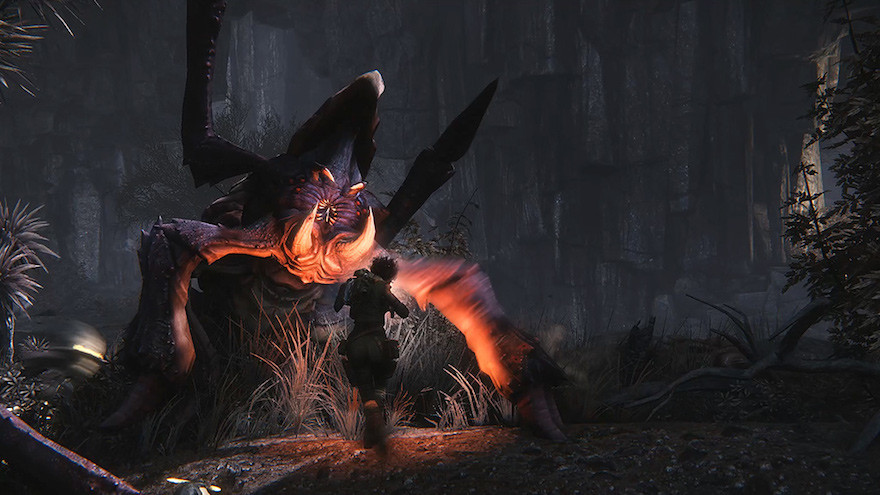 Most videogames are, at their core, about hunting. Shooters ask players to systematically eliminate enemies by flushing them out of cover and gunning them down; role-playing games revolve around improving a character’s skills by fighting monsters and gaining experience; even the pacific adventure and puzzle genres are focused on examining environments for hidden clues and using them to assemble the solution to a problem. This isn’t surprising since most of our social games abstract the rituals of hunting, too. Playground tag, hide-and-seek, and swimming pool Marco Polo are based on the hard-coded, instinctual drive to enact our species’ historic roles as both predator and prey. No matter how far removed from our roots, we are mammals who can’t seem to escape our need to kill and avoid being killed.

With Evolve, Turtle Rock Studios gets to the heart of the hunting game. The world it takes place in is futuristic, the alien planet that serves as battleground littered with science fiction airships, strange fauna, and the beat-up remnants of high-tech buildings. The player is positioned as either one of a team of four heavily-armed hunters or the hulking monster that needs taking down. Even though the human characters may be decked out in cybernetic jetpacks and a creature may hover around spewing lightning out of a Lovecraftian squid-mouth, the basis of Evolve is as old and relatable as shooting flint arrows at mammoths.

most of our social games abstract the rituals of hunting

Each player picks a character who performs a specific role in the hunt: the assault class is best at dealing damage, the medic is good at healing, the support shields others from harm, the trapper locates and locks her/his prey in place. And there’s the monster who must run and hide from everyone else, eating wildlife and gathering energy until it’s ready to “evolve” to a higher form—one that’s stronger, meaner, and better able to strike back at its predators. All of these systems are aimed at bulking up one of the simplest premises in videogames. Regardless of the character chosen or mode played, Evolve is about the push and pull of the food chain. As one of the hunters, there’s a distinct thrill to cornering an elusive, deadly beast and working in tandem to annihilate it; as the monster there’s a real sense of fear to the early stages of running and hiding before becoming tough enough to enact bloody retribution.

Evolve’s gameplay variations include levels where, depending on whether the player is a hunter or monster, civilians must be rescued or killed, generators demolished or saved, and monster nests destroyed or protected, though the straight-up hunt mode is the purest form of its design ethos. Free of unnecessary distractions and buoyed by the natural urgency of the predator/prey impulses, each match centers on the building and eventual release of tension. Both sides scramble to prepare for the battle that must take place before the match can end. The monster flies around, eating as much as possible without giving away its position while the hunters frantically follow its tracks or positional giveaways—flocks of carrion eaters circling a fresh kill, broken branches, and lightly glowing footprints—in order to get the jump on it before it can evolve. This part of the hunt is all about mounting anticipation, the climax building constantly as confrontation edges closer until released in a violent mess of laser beams, bullets, and claws.

Since Evolve is primarily an online multiplayer game (there’s an offline version that replaces human players with artificially intelligent characters), the kind of teamwork that makes the best orchestrated hunt’s interlocking roles work together in perfect harmony doesn’t always happen. When things fall apart, the lovely simplicity of the game’s proper arc breaks down into an inelegant scramble. Wannabe heroes get killed fast enough to unbalance the delicate synchronicity necessary to win; overeager monsters rush into fights they haven’t prepared for and are knocked out without challenge.

Turtle Rock Studios tries to compensate for this sort of thing by packing its game world with enough color and detail to distract from the fact that its design principles balance precariously on the knife’s edge of internet-based cooperation. Each of the hunters is an oversized cartoon—Markov is a single-mindedly violent Russian heavy gunner; Lazarus is a bald, goateed mad scientist; Bucket is a chunky robot with a posh English accent—who are entertaining even when they’re doing nothing more than running and jumping around a level. The environments are well-designed and varied, with foetid swamps, snowy caverns, and rushing waterfalls; the sound effects lend weight to every jetpack jump, crackling lightning gun blast, and monster’s roar. Evolve is rich in the kind of surface details that make its core concepts shine.

when the pieces come together as they’re meant to, Evolve is satisfying in a bone-deep kind of way

Each individual piece of the game has been crafted with the knowledge that, should the (imperfect) humans controlling the action play their part properly, the systems are in place to make every hunt look, sound, and feel hugely exciting. The potential for each new match to take advantage of this is enough to make the occasionally messy round worth slogging through. Because, when the pieces come together as they’re meant to, Evolve is satisfying in a bone-deep kind of way. It captures something digitally that an apartment-dwelling, cat-owning, minimal meat-eating 21st century person would rather not experience for real. It makes hunting big enough to fire synapses that have atrophied over decades of grocery store trips. And it does this with enough slick detail and sci-fi abstraction to avoid the sort of sticky references to bleeding deer and camouflage vests that would turn off a large portion of its audience.