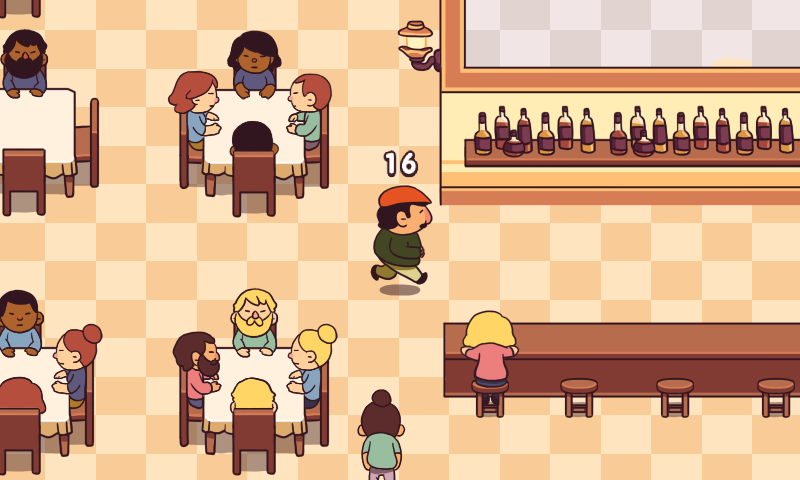 Humanity’s most common phobia, according to a plurality of strange websites that specialize in this topic, is arachnophobia. Fair enough. Creepy crawly spiders are hardly pleasant. But fear is contextual: Your biggest fear when home alone is rarely your biggest fear when at a public event. For research into that latter category, we have the decidedly far-from-exhaustive profiles of contestants on The Bachelor. Every year, these profiles reveal that televised Lotharios and their concubines fear nothing more than the sudden onset of diarrhea on a date. Again: fair enough.

This scatological tidbit came to mind while considering Excuse Me!, a game that bills itself as “the world’s first flatulence crisis management simulator.” In Squiddershin’s entry for the 2015 “A Game By Its Cover” game jam, you control the movements of Peter Le Pétomane, a moustachioed man who is feeling decidedly gaseous. If that weren’t a big enough problem, Peter is at a restaurant. Your job, then is to navigate the crowded environment and find Peter a secluded place to pass wind.

Excuse Me! reimagines social mores as something of a maze. The flatulence angle is new, but the underlying gameplay ideas aren’t that radical. In practice, you are on a race against time through an obstacle course of sorts. Been there. Done that.

This similarity to other games is what makes Excuse Me! so compelling. Insofar as our fears are contextual, it makes sense that a typical venue can be recast as a chamber of social horrors. A restaurant is scarier when full than when empty, much as it is scarier when you’re on a date as opposed to eating alone. In effect, to reckon with your fears is to reckon with a series of social constructs. Flatulence need not be understood at crisis, but we—and Excuse Me!—choose to do so. So let loose (not in that way!) and navigate the obstacles that are the construct that is decorum.