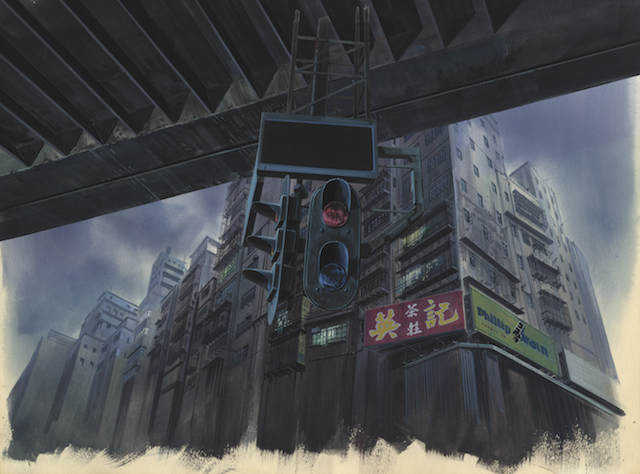 When I visited Tokyo, Japan earlier this year for the first time, I was struck by its block-by-block awe-inspiring architecture. From the woven-like walls of the Daikanyama T-Site bookstore, or the mirrored, cave-like entrance to the Tokyu Plaza Building on the cusp of Omotesando and Harajuku, Japan takes its architecture to highly modernized, nearly impossible heights. And it makes sense, for a country whose animation has been setting the standard for fictional architecture since the early 1980s. Animated architecture that looks to both the present and the old, and twists it into something new for the future. Luckily, there’s a new exhibit on display at The Museum of Architectural Drawing in Berlin, celebrating the highly-detailed, labyrinthian background art that is often forgotten.

The aptly-named “Anime Architecture” exhibit shines the spotlight on just that: the environment art. The towering, bustling cityscapes of classic cyberpunk-leaning anime, with the snake-like pipes and cables that weave seamlessly through its architecture. The fictitious cities once only dreamed up in the words of Philip K. Dick and William Gibson’s fiction, realized visually once the pen went to paper in Japanese animation. Berlin’s “Anime Architecture” exhibit, curated by Stefan Riekeles and Nadejda Bartels, features a number of original drawings from iconic anime, such as Mamoru Oshii’s Ghost in the Shell (1995). For many of the sketches, this is the first time they’re being seen outside of their respective films, previously residing in studios’ old cardboard boxes, collecting dust.

The exhibit was borne of a dream Riekeles and his colleague David d’Heilly had back in 2007, where they began visiting animators in their Tokyo-based studios. The idea to focus on background illustrations and concept art came naturally for Riekeles, according to an interview with The Creator’s Project. As oftentimes with background art, the soul of the production is on full display, despite how fleeting it may be. Inspired by Hong Kong, according to Riekeles, anime artists looked to the specific city for inspiration. “The idea was to evoke a feeling of submerging into the deep levels of the city, where a flood of information overflows the human senses and a lot of noise surrounds the people,” he told The Creator’s Project, specifically regarding Ghost in the Shell‘s artistic flare. “The artists were looking for an expression of a crowded space.”

Many of my favorite scenes from anime have a lot to do with their environments. Like the towering skylines of Neo-Tokyo in Akira’s (1988) opening bike race, soundtracked by the pounding drums of “Kaneda’s Theme.” The lived-in grime of Mars’s capital city in the year 2071, as seen in the standalone film Cowboy Bebop: Knockin’ on Heaven’s Door (2001). The susceptible-to-another-apocalypse, dystopian city of Tokyo-3, the scene for many mecha battles, in Neon Genesis Evangelion (1995). The environments in anime and manga are often sprawling, dizzying, and may even appear a bit real. Despite being the background to the action, in a lot of cases, the environments can breathe more life and context into the world it represents than the actions of its characters.

“Anime Architecture” is on display at The Museum of Architectural Drawing in Berlin until October 16th. To learn more about the exhibit, you can click here.