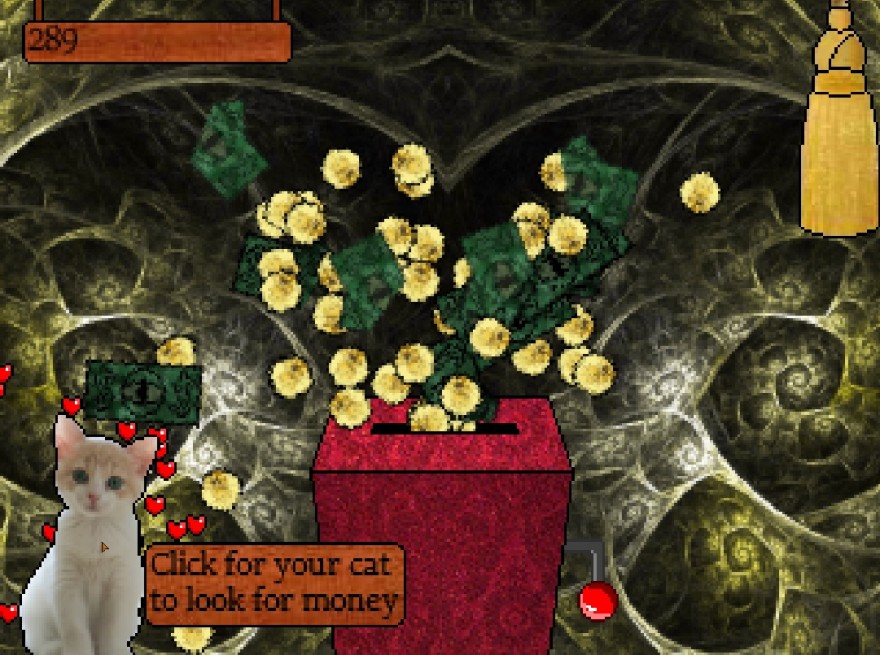 Exoptable Money has devastated me. It’s a tragicomedy “idle game”—as they’re known—which has caused me to, once again, wallow in the memory of my most horrifying moment with the internet.

It involves a stiletto, a kitten, and me staring at a black computer screen afterwards, motionless, weeping, for ten long minutes. The memory, that is, not Exoptable Money—no, that starts off innocent enough … just a person with a money-making machine, what could ever go wrong?

the gift that Exoptable Money keeps on giving is one of tragic, dark twists.

You pull the lever down on your plush red velvet box and out pops a leafy green dollar. Marvellous! As this fountain of currency continues to increase your wealth, you discover that you can invest in improvements to the machine, so that soon it’s generating golden coins, and then topaz crystals. It’s as engaging as Cookie Clicker (and with a lot less clicking), or any other activity that offers the satisfaction of watching a number increase rapidly. We are simple beings.

As anyone who has played enough idle games will come to expect, this mundane and passive activity begets an emergent narrative. It starts with the adorable kitten that you can purchase to hunt money for you. Now, look, I bought the kitten without knowing what it does. I was driven by my love of cats and having recently moved into a new flat in which no pets are allowed. A little digital cat friend seemed like a good way to cheer myself up.

Robert Brock, the cruel designer of Exoptable Money, must have known this. What became of that kitten ruined me for a few minutes, and what’s worse is that it was I that had caused it; my greed. My heart was wrenched from my chest and held before me, still beating with the love that this loyal feline had fed it. Yes, the gift that Exoptable Money keeps on giving is one of tragic, dark twists.

As with Tomorrow Corporation’s Little Inferno, its mundane money-making beginnings grow personalities that contact you by mail. Madame Sinclaire is the first, and she tells you early on that she, too, must make money. You presume that her motivation is as banal as your own—for greed and curiosity’s sake—but you find out later that she actually has no choice.

There’s another character that also contacts you by mail, and who unlocks new items for you to purchase in the pull-down shop. Between these two characters, you are pulled into a story of deception and greed with you at the center, all of it based around your money-making machine.

By its end, and I won’t spoil it, you feel that you’ve been dragged through the mud of hopelessness. Perhaps you learn something about human desire, as it’s like you’ve lived through a fable that sacrifices you in order to teach you a lesson. Exoptable Money is a game that should be played rather than read about, and one that you can do so while attending to other matters. Even so, it will have no trouble keeping your attention.

You can download Exoptable Money for free on Game Jolt.