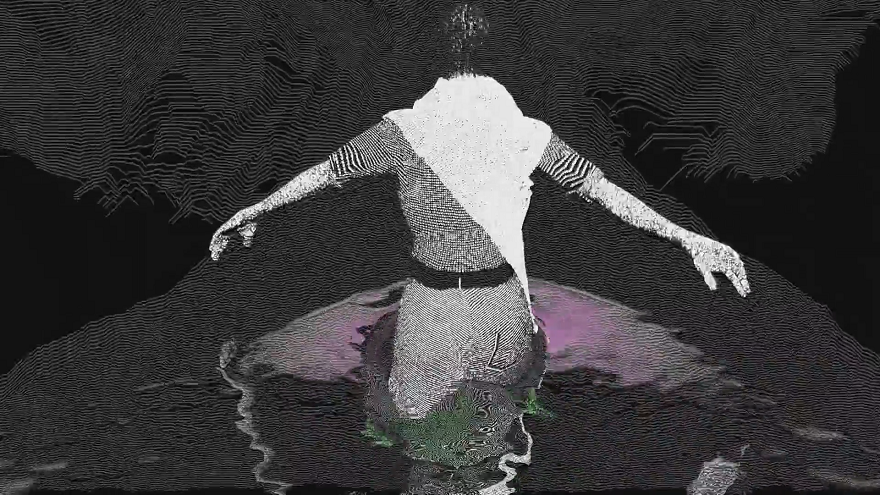 In Cave Exits, Peter Burr takes the compulsory logic of the videogame dungeon and re-imagines it in the glitch-infested landscapes of a Tarkovsky film. The video installation, which ran earlier this month at the 3LD Art & Technology Center in New York City, encloses the audience in a 4-channel video cube, each side of which displays a different unfolding of what Burr calls “an endlessly mutating death labyrinth.” Repetitive, fragmented, and elusive, the Cave Exits lingers on the edge between interactive cinema and videogames, unique in part because of how it positions the audience in the context of the exhibit.

As the narrative takes place across different screens, viewers are made to struggle to make sense of the story Burr and his collaborators are gesturing toward. Each person is forced to choose where to look and what to focus on, making it impossible, Burr explains, to “process all incoming information in a single sitting.” Instead, it’s an interactive narrative where the peripheral used to engage with the screens, rather than a controller or a keyboard, are the human neck and eyes, allowing for, in Burr’s words, “expression beyond mere hardware.”

This relationship between the physical and the digital plays out within the story of Cave Exits as well. Aria, the wandering figure on screen, gets information and feedback from the surrounding environments via an apparatus that protrudes from her rubberized intestine. In an interview with Hopes and Fears, Burr confides, “I think about this a lot… the way we can frame our body as a system of chemistry and how that completely changes the input that is allowed in.” The way Cave Exits plays with information is in many ways an extension of this. By confining the audience and instrumentalizing their own appendages, it makes them not just participants in Burrs derelict world, but bodily conduits integral to its full realization.

The project originally grew out of work Burr had already begun with a past installation, Special Effect. That show, as Burr explained to The Creator’s Project, began with a series of computer images the he created while watching Andrei Tarkovsky’s Stalker. Playing off the “defamiliarization” at work in the movie, Burr’s aim was to explore the disorienting impasse between people’s desires and the technology used to fulfill them. With Cave Exits‘, the goal was to make a videogame version of Special Effect, taking influences of Tarkovsky and ruin porn, and overlay them with the aesthetic and interactive possibilities of labyrinths.

That’s when Burr began working alongside Porpentine. Together, they explored Burr’s concept in a visual essay for Art Fag City before eventually going on to create a larger story surrounding the idea. While several parts of that project became Cave Exits, Burr explained to Hopes and Fears that he and Porpentine have already extended far beyond that. “Cave Exits is just the entry point to something we will probably be working on for years,” he noted. Though the installation touches on a couple of fundamental parts of the overall story, he and Porpentine have been collaborating on a “sketch” that goes far beyond it.

Though the project doesn’t have a title yet, they are currently developing it using a combination of Twine and image software. Meanwhile, Burr says the music is being composed by John Also Bennett, who worked with them on Cave Exits, using modular synths and other digital tools. While there’s no clear timeline for when the project will be complete, Burr has said more of it will appear in further video installations planned later this year.