Dress-up games have a long history—tracing back at least 300 years, to European paper dolls—but throughout the centuries they’ve remained overwhelmingly gendered. Pay a visit to one of the many, many sites that host these games on the web and you will be blinded by pink. Once your eyes adjust, you will see girls wearing lipstick, bows, and coiffures fresh from the salon. These young ladies are generally posing in floaty skirts, bikini outfits, and evening gowns. In more advanced dress-up games, like The Ugly Princess, you will be asked to help them solve skin problems with a pimple popper and moisturizers, before hopping in a sequin-studded, pink limo. Occasionally you’ll come across a “Hunk Dress Up” or “Boyfriend for You,” but these games are targeted at women, too, or at least festooned in the traditional signifiers of femininity.

Like a lot of video games, the dress-up genre is partitioned by gender stereotypes, but there is an increasing number of doll games that are not gender restrictive and invite everyone to play, regardless of their affinity for the color of cotton candy.

Femmepocalypse, created this past February in Toronto at the Feb Fatale game jam, is one such game. Instead of flats or high heels, the player picks the lips, blush, and eyebrows of a world-conquering entity. “The hair button does not work, and never will,” reads the webpage. For skin tones there are no pinks, tans, or browns. You select between green microchip skin, a blue zigzagged Tron skin, chrome, a binary skin with ones and zeroes, and one that looks like Wall-E’s love interest.

It’s the face of “a cyberpunk person,” Alto Punk, the designer of the game, was quick to correct me when I mistook the character for female. “I like to say ‘person.’ When I first had the idea, I was like, ‘OK. I’ll make a lady.’ But the person turned out more gender-neutral than I intended, and I like that. Whatever helps the player relate to that character, then that’s the gender, I suppose,” they said.

“A properly made dress-up game should be accessible to all genders,” Alto told me, which may be why the pixelated dress-up doll lacks a body. It makes it easier for females, males, and people who don’t think of themselves in those terms to click with the game.

Instead, the focus remains on the face. This is part of why Femmepocalypse includes a mask. Using a piece of acetate and some tinfoil for conductive material, Alto jiggered together a controller that the player wears on their face. This setup allows them to touch different parts of their face (cheeks, eyes, etc.) and see the corresponding parts of the image on the screen change shape, which falls in line with the game’s minimalist plot. The script has you uploading your consciousness into a computer, then subjugating the world’s networks. Naturally, you want to look like the intimidating artificial intelligence that you are, so it’s important to tweak the neon glow of your cybernetic eyes just right.

Alto tells me there’s no intentional message baked into Femmepocalypse, and that they think girly dress-up games such as the Korean Candybar doll maker are pretty cool. But if there is an unintentional message, it’s that fashion is something that is universal, which means everyone should be able to enjoy this template for games.

“I think a lot of boys are secretly playing these games,” they said, and it’s probably true. Look at a game like Nintendo’s massively popular Animal Crossing, which appeals to boys and girls, young and old. Choosing your character’s shirt, hat, and facial appearance is a big draw. And even in a macho shooter like, say, Counter-Strike, the hat makes the man. Can dress-up games for all genders be far behind? 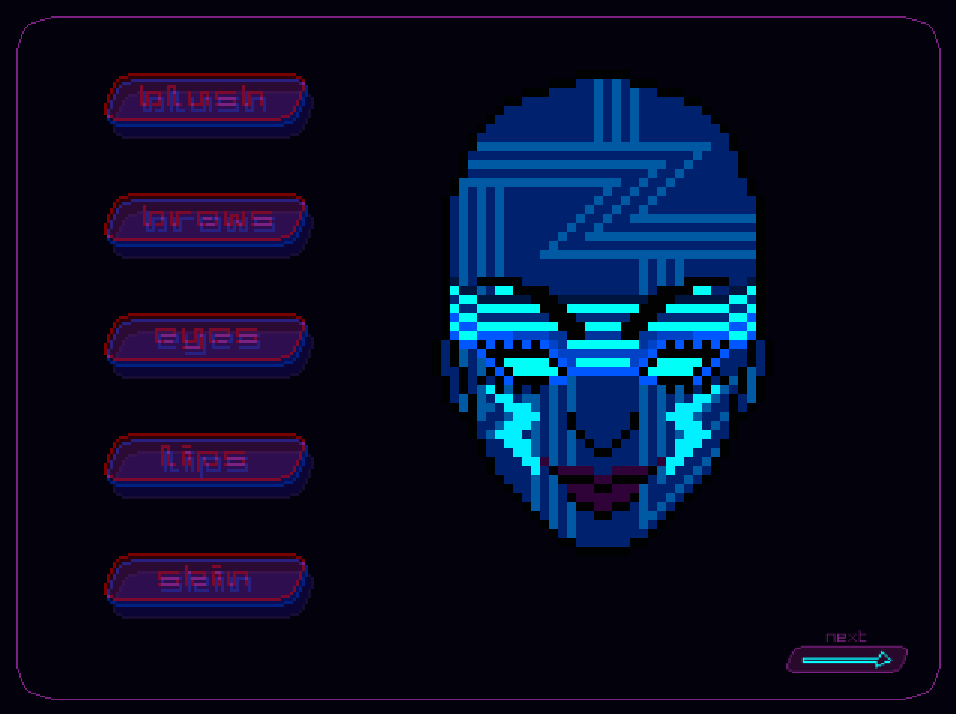