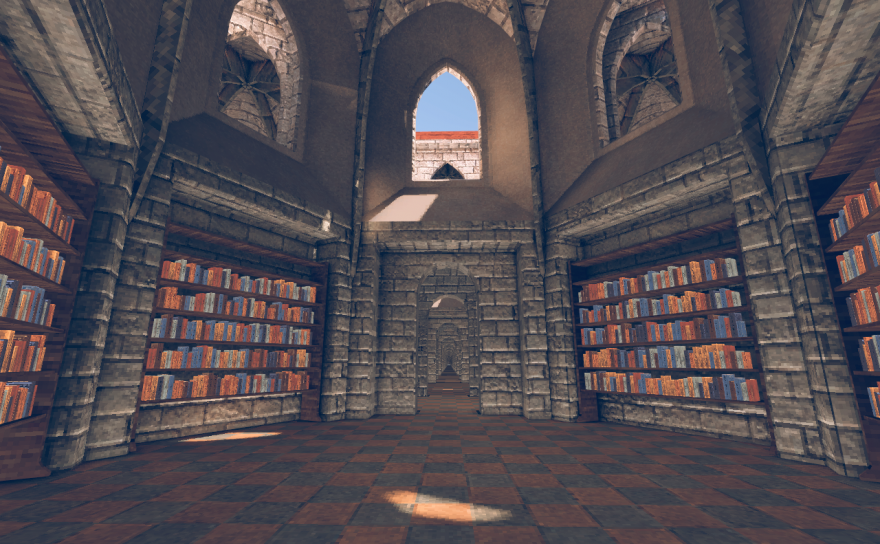 If there is an infinite library of every possible permutation of basic letters and punctuation, among all the absolute nonsense and incomprehensible rambling must exist every coherent text that could ever be written.

This is the basis of Jorge Luis Borges’ short story, The Library of Babel, which is in turn the basis of a #ProcJam game called Library of Blabber. Created by Ivan Notaros, Library of Blabber seeks to emulate what Borges’ overwhelming hexagonal web of a library must look like: an endless series of branching hallways, each leading to shelves and shelves lined all across with books spouting random strings of text.

Some of the books use the English alphabet, others Russian or Greek, with strange imaginary titles. Once in a while, you’ll catch a glimpse on the spine of one of these novels, or several pages in, of a word understandable in your language, a small indication that maybe there is some order in all of this chaos. You just haven’t looked hard enough.

find sense in the mess of non-words

The inhabitants of Borges’ Library of Babel went crazy trying to find sense in the mess of non-words. You might, too, if you spend long enough doing the same. A website also titled Library of Babel attempts to recreate the same thing, hosting a database of random strings that you can access randomly, or via a network of visualized bookshelves.