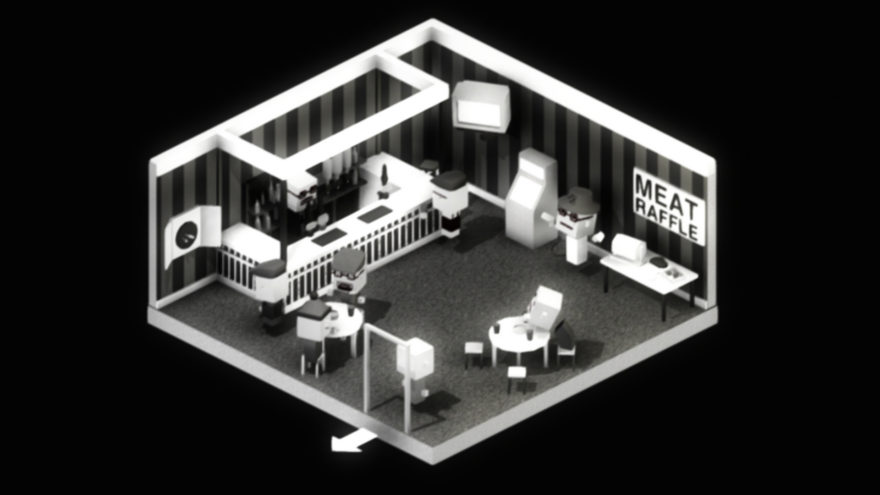 The northern England town of Grimsfield is bleak—completely desaturated of color, existing solely on small, square dioramas. Its inhabitants, architecture, and virtually everything within it are completely cubular, except for some dashing, rare berets. Everyone within Grimsfield is self-absorbed, the protagonist perhaps most of all. He’s an ex-detective who has recently given up on his day job to pursue his dream of becoming a poet. But if only life were that simple in this Kafkaesque adventure.

Adam Wells, the creator of the point-and-click adventure game Grimsfield, is an animator by day, newly-dubbed game designer by night. Grimsfield is his first, and “possibly last,” foray into game development. “I figured the most interesting thing I could do is produce a small adventure game, similar to a Twine game, but with a few more graphic elements to give it a sense of location and tone,” explained Wells in a blog retrospective about the experience of making his first game. “I tend to enjoy games and films that show rather than tell.”

Grimsfield’s a short game, running from about 45 minutes to an hour. All along the bite-sized adventure are enriching, silly characters that are fiending to tell you about all their problems—whether you like it or not. And you won’t like it. You always seem pestered when asking another cube-headed person about where they got their beret, or scoff when you learn you have to go another office to get a stamp on a form. So many hoops to jump through just to be able to perform some live poetry, man. The rules-laden town of Grimsfield is all about making your life inconvenient.

Grimsfield is emblematic of Wells’ own past work. The cubular styled characters from his short film Brave New Old (2012) return for his videogame debut. This time they’re coupled with the noir-driven style of his short The Circle Line (2013), combined to create a singular, yet familiar style for the game. Wells also cited the classic noir adventure game Grim Fandango (1998) (most particularly the Blue Casket location—wherein Manny recites some spontaneous poetry) and the solipsistic Blue Jam Monologues radio show from comedian and writer Chris Morris as notable influences for Grimsfield.

Among these pointed aesthetical points, Wells also sought to emulate the absurdist comedy of British comedies, such as Catterick (2004) and The League of Gentlemen (1999). “I knew I wanted to portray a side of England in games I have never seen,” wrote Wells of the obscure influence. “I and many others fetishise the likes of Twin Peaks and small town Americana for its assets and tone. But small town Britain is equally fascinating.”

The absurd, bleak town of Grimsfield is available to explore on PC or Mac via itch.io or Steam for $3.99 (a price that would especially please the town’s shop purveyor Sexy Jim).