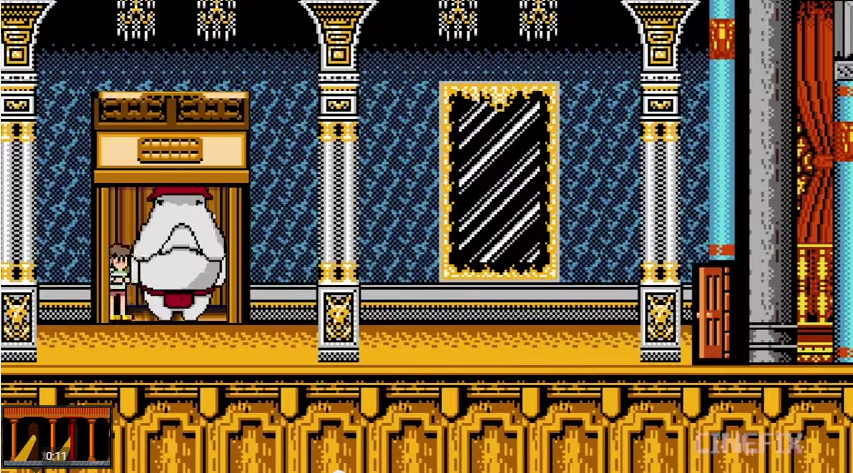 “I do believe in the power of story. I believe that stories have an important role to play in the formation of human beings, that they can stimulate, amaze and inspire their listeners.” – Hayao Miyazaki

The above quote could easily apply to any of the stories woven by Miyazaki and his animation studio, Studio Ghibli, which have been formative to so many people across the globe. Visual artists in particular have used the storyteller’s colorful worlds to inform their own original work and tributes. From woodblock prints to art nouveau, artists have translated the Japanese filmmaker’s stories into other forms many times over. Recently, YouTube channel CineFix paid homage in a more modern style with its charming 8-bit version of Spirited Away. It is the latest installment in their 8-bit Cinema series that portrays the plots of popular films re-imagined as the low-res videogames that are as analogous with childhood as Miyazaki’s films.

the expansive universe of Miyazaki […] is a natural fit for videogames.

8-bit Cinema’s portrayal of Miyazaki’s magnum opus captures the hectic world of magic and spirits that he created almost fifteen years ago. A tiny Chihiro, the heroine of Spirited Away, side-scrolls through a world created with loving faithfulness to the original Oscar-winning movie. Each trial that Chihiro faces in Spirited Away becomes a mini-boss or a puzzle in its 8-bit iteration, and No Face is just as creepy as it chases Chihiro throughout the bath house. The frenzied soundtrack calls back to the stressful late-night boss battles of NES games as it pushes Chihiro along her epic journey, replaying the powerful themes of the original score.

In each Studio Ghibli film we are thrown into the midst of worlds that are both strange and familiar, left on our own to glean their politics and morals through the narrative much like we are in games. For Kill Screen’s film week, Gareth Martin wrote about the dense spaces of Studio Ghibli’s films and their game-like qualities. Likewise, Ni no Kuni showed that the expansive universe of Miyazaki and Studio Ghibli is a natural fit for videogames. Games allow us to spend hours exploring fictional universes in a way that no other art form allows. This 8-bit Cinema version of Spirited Away is so endearing because it alludes to that which all Miyazaki fans desperately crave: the chance to occupy those 2D spaces created by a visionary storyteller.