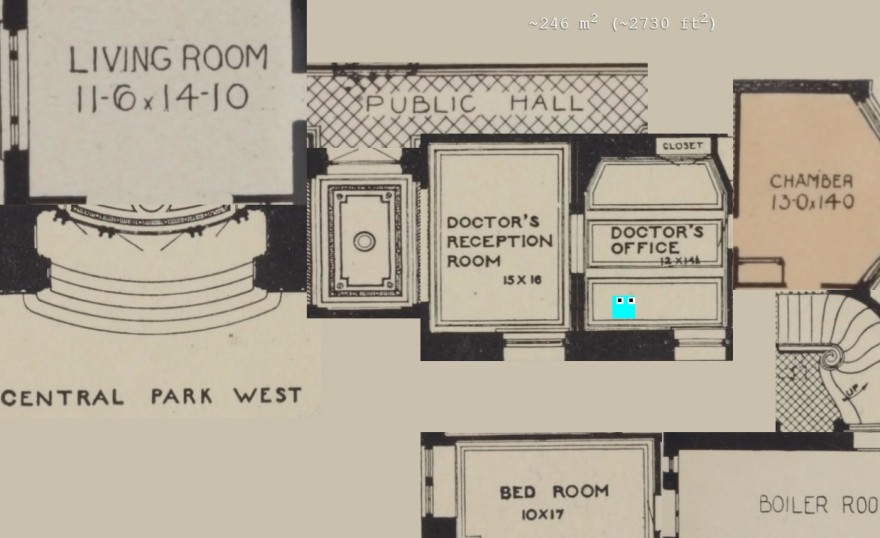 The idea of the New York City apartment as we know it had yet to be established at the end of the 19th century. The inhabitants of huge multi-occupant living spaces were mostly low-income immigrant families, isolated physically and culturally. The change began with Jacob Riis’s 1890 book How the Other Half Lives, which shocked upper and middle class New Yorkers with descriptions and photographs of the abject poverty of the slums. As the 20th century began, improvements to tenement living, changes to laws mandating building height, and the new subway lines paved the way for the apartment to become a fixture in all social classes.

At the same time, the apartment was rebranded as a luxury option—marketing teams distributed brochures that advertised units with ten or more rooms— foyers, kitchens, libraries, vestibules—in taller buildings in more varied architectural styles, Beaux-Arts included. By the 30s, almost everyone in Manhattan was living in an apartment.

Mansion Maniac is a “public domain remix” by Mauricio Giraldo of New York Public Library Labs that collects rooms from these brochures and shows off imagined luxury apartments that build themselves piece-by-piece as you wander your square blue avatar through them.

The logic that governs the project is spatial, rather than architectural—one room leads into any other, as long as there’s a door. Some apartments generated for me felt like I might want to move in tomorrow, others less so: one apartment is nothing but the same staircase leading into the same library over and over and over; another is a palatial front on central park west leading into only a kitchenette. When Tevye in Fiddler on the Roof dreams of being wealthy, he yearns for “one long staircase just going up, and another even longer coming down.” Mansion Maniac reconstructs that dream-like outrageousness created by the wealth disparity at the turn of the century.

If the rooms that appear have enough doors, the apartment can continue to grow to the point where it doesn’t fit in the space it lays out: rooms overlap, occupying the same two-dimensional space. The same halls reappear, the same kitchens… getting lost and stuck in one of these houses feels like Giraldo is at once admiring the scope and majesty of the apartment complexes and criticizing their indistinct qualities of luxury.

As much as Mansion Maniac speaks to the consumption of living space as commercial art and to class segregation of early 20th century New York, it also provides its assets to the viewer, and opens up its source code, making itself available for reconstruction and reuse.

Mansion Maniac (along with other “public domain remixes” Navigating the Green Book and Fifth Avenue, Then & Now) helps promote the NYPL’s effort to digitize their increasingly massive collection of public domain materials. Giraldo also links (on his Twitter) to a blog with a tutorial for other map projects that don’t require significant coding knowledge.

You can play Mansion Maniac in your browser.