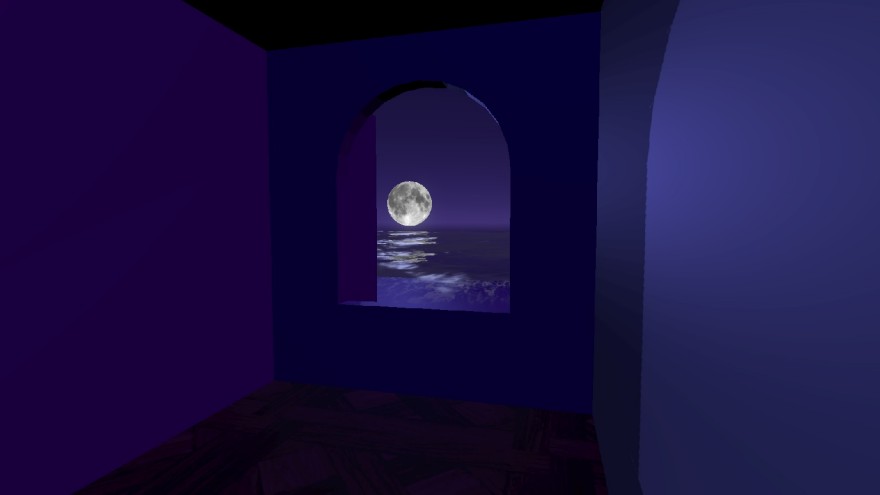 If you’ve ever moved house you should be familiar with the peculiar act of emptying familiar spaces. In doing this myself, I’ve come to realize that memories not only lie within the objects we own but also the walls and floors we have them occupy. The difference is that we have to leave those memories behind with the architecture (it’s why I always take a long last glance of each empty room before shutting the door). There’s a sadness to this.

I see this captured in Albert Lai’s (creator of 2:22AM) exploration game ten moons. He calls it a “mood piece set in a house on the sea” and it’s worth noting that it was made for CloneJamKittyHorrorshow—a three-day game jam that challenged participants to create games inspired by Kitty Horrorshow. What Lai seems to have taken from Kitty is her penchant for “sad architecture” (as I’ve previously called it). This is communicated visually through the lonely house that comes cast in a gloomy dark purple. But Lai doubles down on it with the game’s poetic text.

these objects never existed in the first place.

This text is written across the walls (and once on the ceiling) of the vacant house. However, it only appears inside a room once you’ve walked into an object spinning in the middle of it. The first is a birthday cake, and the text that follows is dedicated to “all the birthdays that never were” and “the fervent first wishes that never were.” Each of the verses correspond to the object that triggered them in such a way, and it’s always to remark on absences.

I’ve deliberately refrained from saying that you ‘collect’ these objects. This is the action that would typically be implied in a videogame when you walk into an object for it to disappear. But the point in ten moons seems to be to subvert this expectation and to infer that these objects never existed in the first place. We are lured towards these shiny trinkets, but there’s no celebratory sound effect upon arrival, no new icon in an inventory system; we are denied any and all access to them.

Through this, what we do acquire is a list of experiences that an unseen character hasn’t had, but clearly wishes they did. It achieves in us an unusual desire to scan the walls for insight. However, there isn’t enough inside the game itself to explain why this person has missed out on so much—it’s a game that begs for interpretation. That said, I find it interesting that Lai jokingly (or not?) rephrased a line from Tolstoy’s novel Anna Karenina to make it about the invisible walls he was putting inside ten moons at the time. “Happy families are all alike; every unhappy family is unhappy in its own way” becomes “all visible walls are alike; each invisible wall is invisible in its own way.”

It may just be a joke, but there are certainly thematic connections to be made here. The idea that the building in ten moons is a broken home isn’t outlandish. Not only do we have those denied memory spaces and lost dreams as evidence, but the house itself is also swallowed by the sea as you explore it. This could be a metaphor for how building a family (or relationships) on weak foundations will only lead it to sink. But it’s not all doom and gloom. It is perhaps a little banal (although the delivery isn’t) but the game’s ending tells us that the process of accepting loss and absence may be necessary in finding a brighter future, which isn’t dissimilar from the ending of Kitty Horrorshow’s Rain, House, Eternity.

As an aside, I came across two endings in ten moons: one intended, the other accidental. The first and authored one (spoiler alert!) sees the house falling away completely to leave you to walk through an open door—the idea presumably being that you’re moving on to somewhere better. But when I played through ten moons the first time I stepped onto a stairwell the moment that the house sunk and it pulled me with it. This left me to fall endlessly into a voidspace surrounded by an image of the rising sun. It could be read to have an identical meaning to the proper end but by leaving me in that warm image it seemed to be even more profound. It’s worth seeking out this alternative ending for its lingering message.