I sighed. It was about 15 minutes into my first game of Velvet Sundown, wherein I’d been assigned a confusingly detailed secret identity and dumped onto a luxurious virtual yacht to interact with other similarly clueless participants who seemed mostly preoccupied with talking about sex and asking “the fuck is this anyway.” What had looked a bit like the successor to The Ship, a little-known but wonderful 2006 multiplayer experiment based on hidden identities and psychological mind games, had turned out to be little more than a barely interactive, troll-infested chat room.

Characters paced around aimlessly, stopping briefly to engage in fragmented conversations rendered in warbly text-to-speech voices. I asked the bartender for a drink, and after a long pause in which his painted smile and wide eyes never wavered, he wordlessly ran away from me. Two people became totally unresponsive, frozen in leisurely cocktail party poses while another two retreated to the cabin in for something salacious, if virtual. Seemingly unprovoked, somebody tased another passenger whose body crumpled limply to the ground while the attacker raided their pockets for some unknown item. He then turned his dead gaze to me, threatening to give me a Colombian necktie if I didn’t do a new designer drug with him. I did. What other choice did I have? 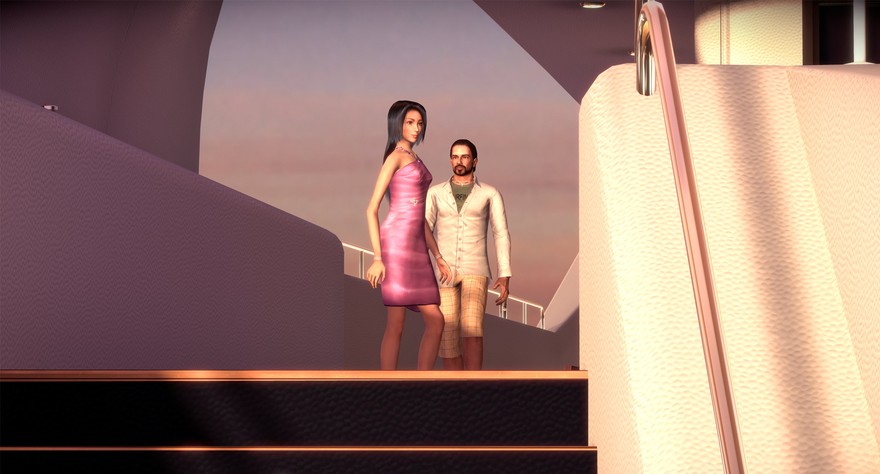 The whole thing was laughable; I promptly uninstalled it. But barely an hour later a nagging sensation disrupted my thoughts, an echo of my brief but potent experience aboard the Velvet Sundown: “What was that weird, funny thing I was doing earlier?” I reinstalled it, almost half-consciously, and before I knew it I was back on the yacht, set adrift again on a fictitious, sunset-smeared sea, joined by another motley bunch of characters with shadowy intentions. Something about the game’s bizarre, dreamlike atmosphere was compelling me to drive onward, the promise of Lynchian depths further on the ship, if only I was willing to brave them. So I decided to keep going. And as I pushed further through that uncanny valley, past the trolls and brainless drones that guarded the entrance, I found a very human heart of darkness—one that reflects all the beauty, corruption, and absurdity of our psyches.

Velvet Sundown is a drama machine, a story generator powered by real people. Everyone who plays it leaves with a tale to tell—about how they got swindled out of some money by a Russian spy who suffered from urinary incontinence and threatened to throw them overboard, about how Mary the staff member stole their passport and was uncomfortably open about her Electra complex, about how a superstar tennis player couldn’t wait to put her “ugly little goblin” of a daughter up for adoption. Things like this just happen in Velvet Sundown—there is no score to keep, no teams, no rules to learn, no real goals that must be achieved. A story simply takes place, one that is sparked by the game but brought to life and conducted by the people participating.

There’s an apropos old adage that goes something like this: “If the internet is a terrible place, it’s only because the people using it are terrible.” Unlike other multiplayer games where chatting with other players is mostly a minor, optional feature, Velvet Sundown’s content depends entirely on the other real humans you get stuck with for each round. As anyone who’s had even a brief scrape with anonymity on the internet can confirm, people like to get real nasty when their identity is hidden or the person they’re talking to is far removed from their immediate surroundings. When everyone else has dropped out of a session of Velvet Sundown except for you and a lone pubescent boy looking to string as many triggery words together as possible, you might feel like uninstalling it and never looking back too. It’s pretty easy to imagine any hope of the developers seeing their creation played the “proper way” being torn to shreds amongst the throngs of marplots using it as a toilet for all their dumbest Chatroulette impulses. Initially, I thought it direly needed a banning or reporting feature, but I’ve since realized that a huge part of the dark magic of Velvet Sundown is the particular type of base, absurdist spontaneity that comes with having an unmoderated, anything-goes policy. It’s more structured and constructive than /b/, more focused and distinct than Second Life. It sets its own stage and turns you loose on it. It gives you a few established guidelines and then lets you bend them to the point of breaking.

It’s this infrastructure of barely controlled chaos that allowed me to promise an especially predatorial Scandinavian gentlemen with a mysterious past that I would have sex with him downstairs if he gave me $100,000—which he did—before telling him to “go get comfortable” and avoiding him for the remainder of the session, sometimes literally getting chased in laps around the perimeter of the boat for minutes at a time. I’ve been an accomplice in a plan to dismember a prominent journalist aboard the ship who overheard me getting strong-armed into starting a drug ring—but I only did it so my crime lord father would finally be proud of me! I’ve had a D-list movie star reveal to me in confidence that her new husband didn’t know about her reassignment surgery, and how she occasionally moonlights as a prostitute for high-ranking religious officials on yachts very much like this one. Later on, her police officer husband drunkenly came on to me. The stories go on and on into deeper, darker, more taboo territory, the only limit to their content being the limits of the human mind itself. It’s likely that most players push things into extreme or absurd territories for comedic effect or entertainment value, but—as with role playing of any variety— it also feels like we’re authentic demons, expressing genuine, repressed feelings. That what happens in Velvet Sundown plays out as comedy says more about the nature of comedy than it does about Velvet Sundown.

It’s a polygonal half-hour soap opera with a gun to its head.

A person’s environment has a major, subconscious effect on her behavior—take, for example, the grim no-rules setting of the survival game DayZ as the impetus for the horrific things that occur within it. Velvet Sundown makes a pretty good case that people are still the main driving force of darkness—because while it does plant a few little seeds of wickedness in its setting (drugs, alcohol, Tasers), it’s a far cry from the bleak, McCarthian hellscape of DayZ, both in content and explicitness, and yet things still mostly end up in intensely weird, dark places. It’s a masked ball in a posh playland, a disguise handed to you along with an unspoken, winking invitation to that unvisited place in the back of your head. It’s a polygonal half-hour soap opera with a gun to its head, written by you and a bunch of strangers on the spot. It’s an improv class that’s teetering over the edge of bearability. It’s gloriously unhinged, and that’s what makes it essential.