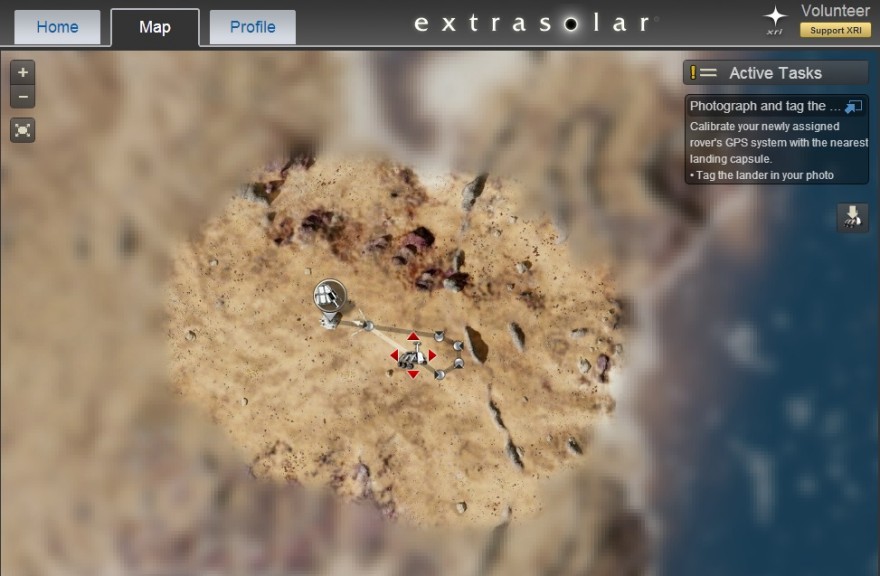 Instead of acting as a penalty for not allowing a developer to bathe in the innards of my wallet, the wait timers in Extrasolar add to the authenticity of its docu-fiction. Instructing a Mars Rover to investigate never-before-seen alien foliage among the red dust, and getting the results, involves a palpable passage of time that builds anticipation.

But I’m getting ahead of myself, let me first tell you how I—neither astronaut nor rocket scientist—was allowed to command a Rover in the first place.

It was easy. I signed up for the beta program. But I didn’t get in. An email informs me that I was a little late to the call and all of the places were taken. Bugger. I forgot about Extrasolar for 10 whole minutes, but then, I got another email titled “extrasolar… i can get you in, chris”.

Before reading the email, I presumed it to be from the developer, who I remember conversing with some months ago. I probably mumbled something about the benefits of writing about games online. But, it wasn’t him.

I’m playing along, analyzing, while silently nodding to the voices in each ear; my loyalty wobbling on a tight rope.

It was someone calling themselves “kryptex81”; hiding behind a pseudonym.

“here’s the deal. i give you a backdoor account, get you a rover. you become my eyes and ears on the inside.”

“i set up a backdoor link to get you rolling. a dummy account with an aced entrance test and signed nda.”

I shrugged and agreed. Extrasolar was back on the cards.

After passing a simulation test, I was given my very own Mars Rover, and started to investigate the planet’s surface. I picked a position, chose a time of day, adjusted the camera angle as necessary (flash and/or panoramic view are also an option), and then waited for my Rover to wheel itself over.

I’d advise not staring blankly at your monitor for six hours, but to take note of the estimated time of arrival, and then get on with your life outside of The eXoplanetary Research Unit (XRI). After a bath and a bite to eat, I return to photographs of my Rover’s journey, and the all-important snap that I instructed it to take earlier that afternoon.

At this point I got lost in tagging areas of interest in the photos for the research team to investigate, some of whom I had direct contact with. It was at this point that kryptex81 sends me a message through Extrasolar‘s browser-based interface. I had forgotten all about him or her, and how I wasn’t supposed to be part of the XRI and its team, with whom I had started to grow close.

The message claimed that the XRI wasn’t telling me everything; that I should be careful.

I wasn’t expecting this from Extrasolar. This narrative element was brilliantly sprung upon me, involving me in the game before I was even in the game, so to speak. Right now, I’m playing along, analyzing, while silently nodding to the voices in each ear; my loyalty wobbling on a tight rope.

My Rover is off to its next destination. It’ll arrive in four hours. Until then, I’m re-reading messages and scrutinizing possible secrets. I’m waiting.

You can (maybe) sign up to Extrasolar’s beta, and play the demo, at extrasolar.com.