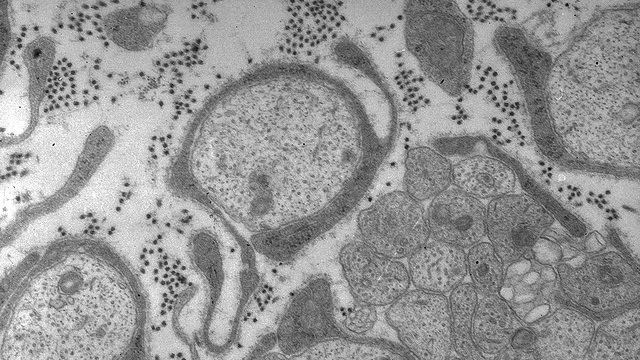 The retina of the eye is wired with a superhighway of fiber, and the crowd-sourced research project dedicated to charting it is called EyeWire. It was codeveloped at MIT and Max Planck Institute for Medical Research under the tutelage of Dr. Sebastian Seung, a professor of neuroscience who specializes in the study of connectomes, which are like road maps to the brain.

But even a small connectome is infinitesimally complex, and in order to get his tasks done with any sense of urgency, he needs to enlist, train, motivate, and let loose a class of diligent but unpaid operators — those who can do the monotonous work of plotting nerve fiber, because humans are better at doing it than computers are.

That’s where Amy Robinson comes in. An energetic young woman with a background in crowd-sourcing, but who tells me she’s always been passionate about the brain, Robinson organized a social network showdown of sorts, which pitted against one another the users of Reddit, Facebook, Twitter, and Google+. Participants came out in droves. For seven days in February, during the beta competition, twelve-thousand people from ninety-five countries collectively averaged twelve hundred hours of EyeWire a day, which by my estimate is a lot of neural mapping.

Amy calls EyeWire a game, but the EyeWire wiki is more precise. It describes it as a 3D coloring book, and it works like this: The lab presents the player with a microscopic photograph of a sliver of cell. From there, a computer looks it over and does a rough sketch in 3D, leaving the player to pore over the minutia and fill in the details. You could compare it to one of those touchscreen boxes at the bar, where you have to spot the difference between two nearly-identical pictures, only in this case you’re sizing up microscope slides and twiggy strands of neural fiber.

While the Megatouch only need amuse drunk people, the draw for many EyeWire players is the chance to moonlight as laymen neurologists, in some cases for up to ten hours a day. Just who are these implacable warriors? A lot of them are high-school, college, and grad students, according to Robinson.

“Look at games like Fruit Ninja. They’re extremely repetitive,” she says. “[EyeWire] becomes slightly addicting. The players tell us that when they’re mapping tubes and they find missing branches, it’s rewarding because they found that and they see it grow.”

Eventually, the team wants to have millions of people playing EyeWire. “There is this whole community of hundreds of thousands of people around the world that oscillate among several [of these types of projects],” Robinson says. “It’s only going to get bigger.” She tells me these people think that it’s incredibly meaningful to help make scientific discoveries, but meaningful in which way? And why is the lab after these intricate doodles of the interior of the eye in the first pace?

It’s incredibly meaningful, but meaningful in which way?

Because they aspire to map an entire brain, so they can understand how higher-level cognition works. Because if you’ve mapped one retina, you’ve mapped them all. Because we don’t know how many types of cells there are in the brain, or even in the retina. Because we don’t know how visual information is processed. Because we’ve recently become aware that the retina does complex processing. Because we still don’t know very basic things such as how we perceive motion. Because, in 2008, the strange asymmetrical J cell was discovered. And because they can capture terabytes and terabytes worth of data, but the problem is analysis. “That’s why we’re distributing the work,” Robinson reassures me.

But is there any practical purpose? “If you understand how neurons work, it opens up a wealth of new opportunities for additional research. The possibilities are limitless,” Robinson says. “There’s a great amount of unknown in neuroscience. It’s fascinating actually how much we don’t know. We can advance our rate of progress into the unknown, and that opens up the limitless possibilities and new challenges.”