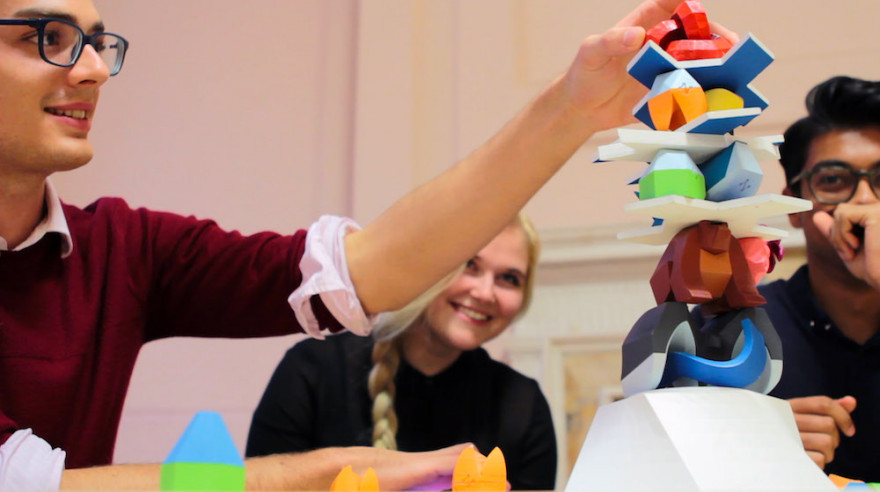 Before there was anything else in this world, there was Bear. Bear was the perfect creature to start off a fresh new ecosystem: big and burly, with a stable base of four flat feet. His back, though hunched over in an arch, was unmovable. And so my quest to create a fabulous world of colors and fauna and water and flame would begin here, with Bear.

Only moments later, as Eagle and Hippo and Fire and Water tumbled off Bear’s back onto the linoleum floor of a New York City cafe, did I realize how wrong I’d been. But no matter: I picked up the pieces and started again.

Videogames have always suffered from a propensity to show rather than tell, so they’ve never been great at sparking the imagination. Even though World of Warcraft is pretty much Dungeons and Dragons brought to digital life, for instance, it’s rigid in the ways you can interact with it. The details of the in-game world can never be anything more than what’s placed directly in front of you. For this reason, I’ve always tried to strike a balance between virtual worlds and tabletop-based adventures that rely on abstracted ideas, leaving space for creative problem-solving and open-ended visions.

Fabulous Beasts, from UK-based hardware/game studio Sensible Object, is a wonderfully eccentric attempt to try and mesh the imagination of physical games with the satisfaction of watching these things come to life in digital spaces. This is a genre that’s already picked up steam in the form of toy-based games like Skylanders and Lego Dimensions, but Fabulous Beasts rests more comfortably in the physical world.

Ostensibly, this is a stacking game that works like a sort of reverse Jenga, where players work together to stack modeled shapes as high as they can atop a small circular platform. But the game isn’t necessarily about stacking. Before each turn, players scan the piece they’re about to play via a reader at the base of the platform. When they’ve securely placed their piece atop the stack (careful now), it shows up on the connected iPad as a digital facsimile of itself. If I get Bear to stay on the platform, Bear shows up on the iPad screen. Knock over the pieces, and you lose.

the balance of your ecosystem becomes more tenuous

The twist comes with the game’s imaginative scoring system. Many pieces included with the set aren’t creatures, but special modifier shapes that will increase or alter the “Fabulousness” (score) of the world (stack) you’ve created. The logic behind these mechanics is always some quirky flight of fancy, for instance: When you’ve populated your world with multiple beasts, they start to become jealous of one another, and players have to use special pieces—like the elemental blocks of fire and water—to bring balance and Fabulousness back into the ecosystem. Other pieces serve as multipliers, and require players to accomplish specific tasks on the iPad as they play the next round. If you thought it was hard enough to balance an egg-shaped object on top of a curved arch, try doing it with one hand.

One game of this and it becomes pretty clear how deep the rabbit hole goes. The provided models are complex, with swoops and spirals and asymmetries that make each placement a challenge. Without some practice, it’s tough to tell which pieces might fit well with one another, much less to place them in an order that optimizes stacking potential. But I find that the difficulty actually adds to the game’s theme. As you build your stack ever higher, the balance of your ecosystem becomes more tenuous—both in the complexity you’re seeing on screen, and in the terrifying anticipation that starts to permeate each turn. It’s tough to be a god, but as you start to synthesize strange new creatures and one-off biospheres, it feels uniquely rewarding, like a kind of strange, delicate synthesis.

Bear is not a very good creature to start out with, at least not in the way I thought he’d be. When he stands on all fours, Bear is cocky and selfish, stealing all the platform space for himself and making it tough for other creatures who need a firm foundation to stand on. But flip Bear over, and his feet stick out to create a perfectly balanced stage. This humble, more thoughtful version of Bear is a meek and altruistic creature. Instead of roaring at the other beasts, he welcomes them, embracing the fabulousness of his world. And although he’s no different than the model I’d placed just minutes ago, I could swear I’m using a brand new piece entirely.

Fabulous Beasts is currently in development, and you can now support it on Kickstarter.