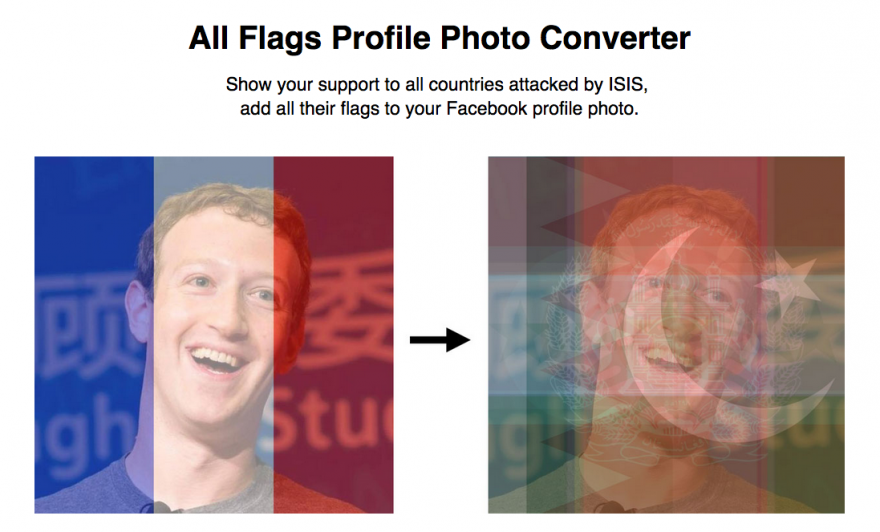 The advent of Facebook solidarity profile filters and Twitter hashtags has irrevocably changed the way we experience far-off disasters. So much of this became clear following the devastating terrorist attacks on Paris this past Friday. Understandably moved by an overwhelming sense of helplessness and sympathy while watching the horrifying details unfold, much of the internet took to Facebook’s rallying cry to “change your profile picture to support France and the people of Paris.”

In the age of social media, the horror, panic, and chaos of a disaster gets filtered through the neat and searchable categories of each platform. Nowadays, no matter where you are in the world, you can feel like you participated in a calamity without ever even leaving the comfort of your own couch. Whether broadcasting a personal story or changing profile pictures, people appear to use social media as a means to try to make collective sense out of the unintelligible—to combat an act devoid of humanity by laying down our own virtual souls. Before promptly moving on.

to try to make collective sense out of the unintelligible

Within only half a day’s time after the initial reports—while the body count remained inconclusive and panic continued to reign over Paris—the social media blitz appeared to suddenly move past the “grief frenzy” stage of posting #prayforparis #tbt Eiffle Tower pics, and instead moved onto the outrage stage. Whoever didn’t adorn their profile with a French flag began, without any apparent prompting or criticism, to feel the need to defend their decision.

One French Facebook user whose anti-filter explanation went viral reads: “If I did this for only Paris this would be wrong. If I did this for every attack on the world, I would have to change my profile everyday several times a day.” In the wake of the equally horrifying attacks on Lebanon by ISIS suicide bombers just the day before France’s attack, many criticized Facebook for ignoring the suffering of other non-Western countries. In fact one site called LunaPics even went so far as to create its own Lebanon filter.

Mass media followed suit along with the online public outcry: whether it was Popsugar‘s somber opinions on “The Problem With Facebook’s France Filter” or the Independent‘s more accusatory “Got a French flag on your Facebook profile picture? Congratulations on your corporate white supremacy.” All shared the same basic line of inquiry: how do you quantify when a tragedy is big or important enough to warrant a Facebook filter?

As is to be expected, the blending together of so many different national’ colors results in a filter that doesn’t communicate quite as clearly as the prototypical #prayforparis post. To an extent, the filter makes every user look like they’re in one of those creepy trans-dimensional Google Dream snapshots. The all-inclusive watermark filter, with its excess in color and noise, essentially takes over the profile picture altogether, rendering the discernible features of the user’s face indistinguishable.

Layered atop dozens of flags, the viewer loses site of the human being behind the profile picture. Instead, you see an entangled global web. While Facebook’s France filter captures individual grief experienced on a global scale, the Allflags filter returns the focus to the global circumstances that lead to the terrorist attacks. Granted, no matter how many countries it includes, Allflags is still just a Facebook filter that speaks more to our inherent need for comfort than our inherent desire to show solidarity. But, at the very least, it’s a filter that doesn’t shy away from the messy, cross-cultural clusterfuck that is the war on terrorism.

You can use Allflags.world for yourself here.