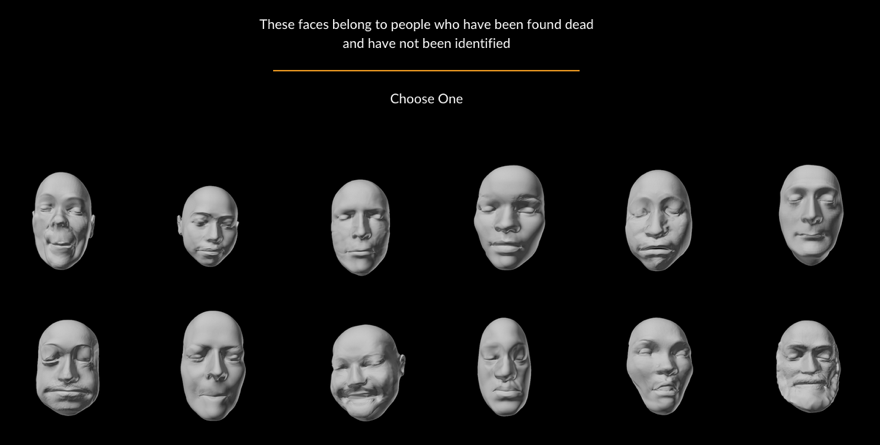 Unresponsive and dressed in a hospital gown, her body was found on the sidewalk in front of what is now an Aston Martin dealership. Perhaps she stepped out of the rehabilitation center next door only to collapse under the prurient stares of the Vantages and DB-something-or-others in the dealership window. No one knows. No one even knows her name. It is, all in all, a strange place to die, but death has no qualms about such things.

God, I wish I could at least call her by her name.

You can comb through what little information we have about this woman—God, I wish I could at least call her by her name—in Facing the Nameless, an “interactive haiku” made by Canada’s National Film Board. “There are more than 11,000 cases of unnamed dead in the United States alone,” reads the introduction to Facing the Nameless, which takes 12 of those cases and attempts to better understand them using digital tools.

The results are undeniably macabre. No matter how many Law and Order episodes you’ve watched, it’s still unnerving to see actual pictures from a morgue or the deceased’s inventoried belongings. Reverse image searches only serve to demonstrate why these twelve people remain unidentified. The woman from in front of the Aston Martin dealership was most definitely not Victoria Beckham.

Facing the Nameless does, however, have its touching moments. Eulogies commissioned by the NFB grapple with the challenge of honouring a person who, in the absence of a name, is little more than a collection of objects. Facing the Nameless is inescapably voyeuristic but it is trying to be something more. It is trying to bring dignity and recognition to those who died alone and unrecognized.

There’s an “I know who this person is”-button at the end of each Facing the Nameless page. Hopefully all twelve buttons get clicked. It’s hard to imagine that an “interactive haiku” will be the thing that makes the difference after all these years, but none of these cases really have better options. Until then, however, Facing the Nameless is a fascinating attempt to restore some humanity to those who tragically had it taken away at the death.

You can check out Facing the Nameless for free here.